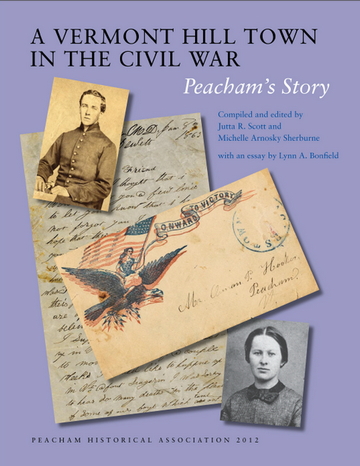 Being in the midst of the 150th anniversary of the Civil War one should not find it remarkable to see a surge in books about the Civil War. This is not an unusual phenomenon, as authors have been steadily releasing books for the 100th, 125th and 140th anniversaries. Computers have made writing an easier task and the Internet has expanded research capabilities with the click of a key.

In some circumstances this wave of publishing has produced some poor products as companies fail to edit for writing style and fact checks.

Fortunately, the subject of this book review, A Vermont Hill Town In The Civil War: Peacham's Story does not fall into this category. It is excellent.

Vermont possesses a rich Civil War heritage having sent over 10% of its population into the military and losing more than 5,200 to battle, disease and prison. Disabilities crippled thousands more and veterans played a role in Vermont politics for decades after the war ended.

Vermonters can be proud of the state's Civil War contribution where men participated from the June 1861 Battle of Big Bethel to Lee's surrender at Appomattox. Service stretched from Virginia, North Carolina, the Gulf coast and into the swampy bayous of Louisiana.

In 1860 the population of Peacham numbered 1,247. When Vermont called for troops the town responded sending 55 men into the 3rd, 4th and 6th Vermont Regiments and another dozen into the ranks of the 1st Vermont Cavalry just in 1861. This ardent support continued throughout the war years and by the end of the fighting Peacham had contributed 169 men, the youngest being 15 years of age.

Of course, such volunteerism does not occur without loss. Forty-eight of those 169 died in service, an astounding 28%. They were victims of disease and battle.

These men and the citizens remaining left behind a trove of historical documents in the form of letters, diaries and photographs. Jutta R. Scott and Michelle Arnosky Sherburne of the Peacham Historical Association have maximized these collections to tell the town's Civil War story.

The finely printed soft cover edition features a historical overview of the units in which Peacham men served, soldiers' letters home, a diary, memories of Andersonville Prison Camp, postwar memoirs, biographies, the story of the town Civil War monument and a detailed examination of the home front told through an essay by Lynn A. Bonfield.

The Peacham Historical Association should be congratulated for their effort in publishing this book. They have produced a publication that weaves a number of materials into a complete story. Many towns, both in Vermont and other states could use A Vermont Hill Town In The Civil War: Peacham's Story, as a model in publishing their own history.

Bully for the Band: The Civil War Letters and Diary of Four Brothers in the 10th Vermont Infantry Band

A Vermont Hill Town in the Civil War: Peacham's Story

The Ninth Vermont Infantry: A History and Roster

A Melancholy Affair At The Weldon Railroad

No Braver Deeds, The Story of the Equinox Guards

The Ninth Vermont Infantry: A History and Roster

They Could Not Have Done Better; Thomas O. Seaver and The 3rd Vermont Infantry