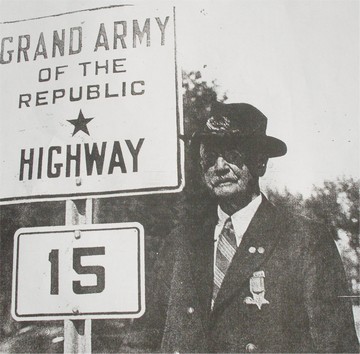 In the passing of George A. Bridge, Friday morning, after an illness of three days from pneumonia, Morristown mourns her last member of the Grand Army of the Republic'

He enlisted Sept.1, 1863, when only sixteen years old, in Company M. of the 11th Vermont, the largest, and one of the best regiments that ever went to the front from the Green Mountain State. At the time of his enlistment the Civil War had been waged nearly one and one-half years, with varying degrees of success, first for the north, and than for the south, so Mr. Bridge knew he was sure to be engaged in real warfare, and might meet death on the battlefield or in a Southern Prison. But that did not cause him-only a lad-to hesitate, for he felt his country needed his services.

His regiment, under the command of that sterling officer, James M. Warner, a young Vermonter from Middlebury, and a graduate of West Point, for whom our local G.A.R. Post was named, was stationed for several months at Washington, constructing and garrisoning Forts Slocum, Stevens, and Totten. It was recognized as the best disciplined regiment of all Washington.

After the bloody Battle of the Wilderness, it was ordered to the front to aid General Grant. It reported for duty near Spottsylvania Court House, with 1500 men in line, and at once became a member of the Old Vermont Brigade, whose five regiments had been reduced to scarcely 1200 muskets. The Old Brigade, under the command of Gen. Lewis A. Grant, had already earned the reputation as the best fighting brigade in the Army of the Potomac. The 11th was was pleased to be deemed worthy to join the Old Brigade, and at once was engaged in some of the bloodist battles of the Civil War, and proved themselves most worthy members of their beloved Brigade.

In July 1864, when Gen. Jubal A. Early nearly captured Washington, the Sixth Corps was sent by Gen. Grant to defend it. Gen. P.H. Sheridan, the brilliant cavalry leader, was then ordered to drive Gen. Early out of the Shennandoah Valley, so the Eleventh participated in the hard fought battles of Winchester, Fisher's Hill, and Cedar Creek, all splendid victories for the Union troops.

They then returned to the seige of Petersburg, where the Old Vermont Brigade led the entire Union Army in the charge which broke the Confederate lines on the morning of April 2, 1865, resulting in Gen. Lee being obliged to evacuate Petersburg and Richmond and surrender at Appomattox one week later. There was much friendly rivalry between the 5th Vt. and the 11th Vt. as to whose flag was first planted on the Confederate works, but that honor went to 5th Vt.. Jackson Sargent of Stowe, father of Walter M Sargent, being credited with planting the first flag on the enemies' works. He was promoted to 1st Lieutenant and was given the Congressional Medal of Honor for this gallant service.

Although the Eleventh was in active service at the battle front only eleven months, 155 of its members were killed in action, or died of wounds; 175 died in Confederate Prisons, and 457 were wounded. These figures demonstrate the severity of the duty Mr. Bridge was called upon to perform, in the performance of which he never flinched. He was in every battle fought by the Sixth Corps from May 1864 to April 9, 1865. That he was a good soldier was proven by the fact that he was promoted to be Corporal, and later a Sergeant. He was mustered out August 25, 1865, having been in the service two years.

This briefly gives one something of an idea of the service rendered his country some seventy years ago, by the man whose passing we mourn, and shows how worthy he was to receive the honors and love given him by the people of his community as the last one of "Our Boys in Blue". The honors and affection bestowed upon him were modestly received, but made him very happy.

Since the passing of Mrs. Bridge in 1921, his son, Winfield, has been his housekeeper, and constant devoted companion, giving him the best of care at all times. The little children all loved him, and he was "Grandpa Bridge" to them, and they remembered him on his birthday with gifts and greetings. His association with young people kept him young in spirit to the very last.

Because I, at different times, have visited all the battlefields where he fought, and because of my interest in the old soldiers, he came, during the last few years, to be a most welcome weekly visitor to my office where we talked, not only of the days of '61-'65, but the present day political fights, as well. Although a staunch Democrat, he was didturbed over the trend of the New Deal, and was happy over the defeat of Curley for Mayor of Boston. He kept well well informed upon current events with his daily papers, was quick at repartee, very kindly disposed to all, and just as keen, mentally, as when a young man.He was always so erect and well groomed, that strangers could hardly believe he was ninety years of age.

He seemed unusually well and full of good cheer on his last visit to us, on the Thursday before he was stricken, so we little thought when he left that it would be the last visit. We shall miss his calls and seeing him sitting at his window, where he always waved his hand and smiled at his many friends as they passed.

So we mourn a brave soldier, a good citizen, a kind neighbor, and a loyal friend.

Written for the News & Citizen by Thomas C. Cheney.

George Allen Bridge of Morrisville, the last member of James M. Warner Post, GAR died at the Copley Hospital, on Nov. 26 of pneumonia after an illness of three days.

The deceased was born on the Elmore Mountain Road on July 17, 1847, the son of Simeon and Lois (Allen) Bridge. He bought the home on upper Main Street about 45 years ago, where he has since resided.

He was united in marriage to Nellie Burke of Hyde Park on March 23, 1870. To this union were born four sons, all of whom are living: Charles M. and Winfield live at the family home: Perley B. resides in Van Nuys, Calif.; and Dr. Walter G. Bridge lives in Boston; a daughter Mabel died several years ago. There are also ten grandchildren, and several great grandchildren.

He was the oldest member of Mt. Vernon Lodge, F&AM

Mr. Bridge was a highly respected resident, who kept constant contact with the patriotic organizations in town, and will be missed by a large circle of friends, who enjoyed his congeniality and kindness.

The funeral was held at the Masonic Temple Sunday afternoon at 2:30, the Rev . W. J. Metz, and the Rev G. E. Goodliffe officiating. The bearers were members of the American Legion Post 33, and sons Of Veterans, Gedion Burnham, Gordon Brooks, and Elmer Campbell from the Legion, and Ryle Farr, Walter Sanders and Wayne Atchinson from the Sons of Veterans. Members of the Legion Post were were in charge of the service at the service at the grave, with Commander Reginald Stancliffe officiating. Burial was made in Riverside Cemetery.

A very large floral tribute was received, including pieces from neighbors, the Louise M. Slocum class of the Universalist Church, The Woman's Relief Corps, the Sons of Veterans and Auxiliary. Mt Vernon Lodge F&AM, and the American Legion.