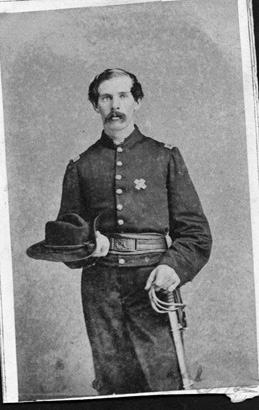 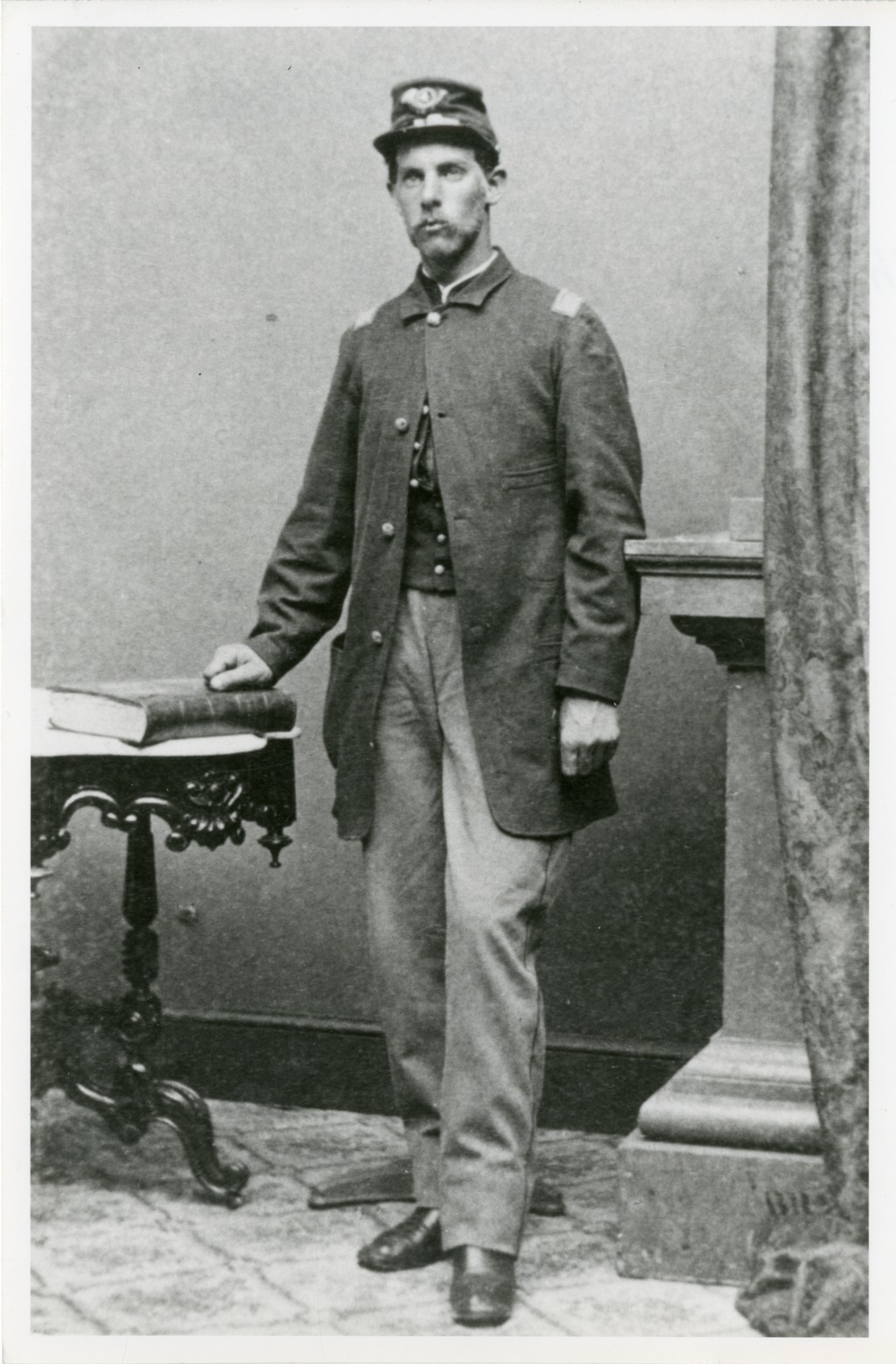 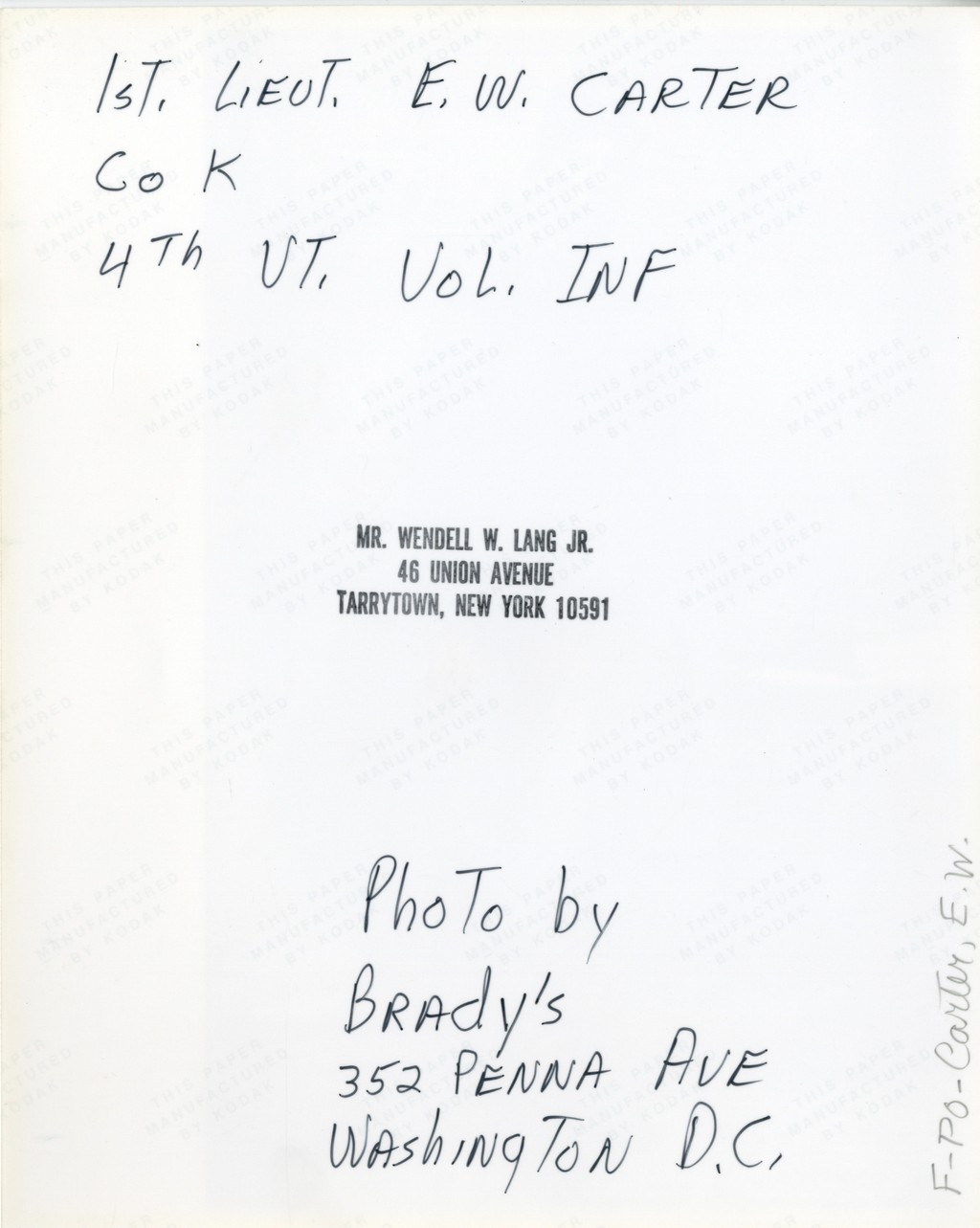 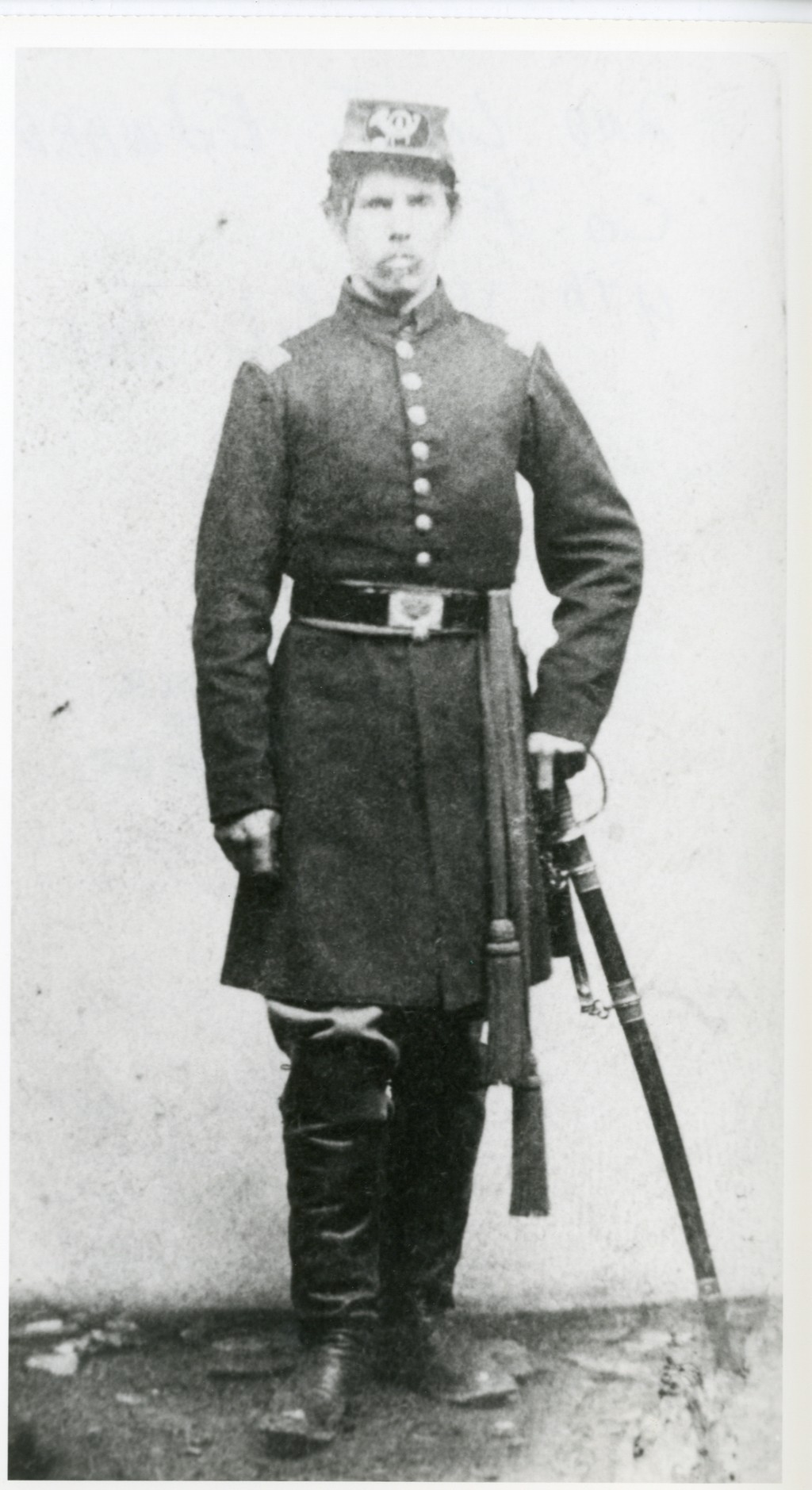 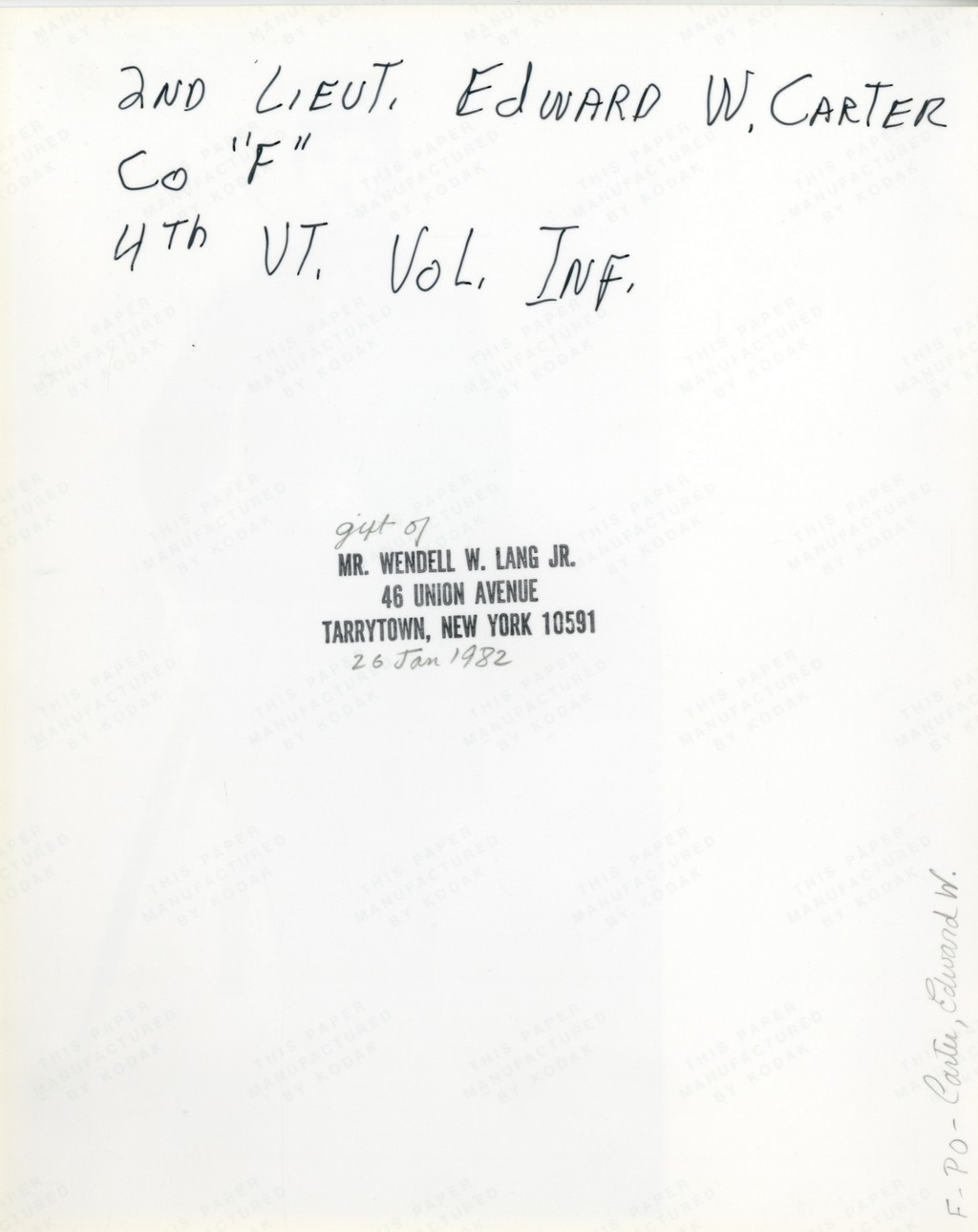 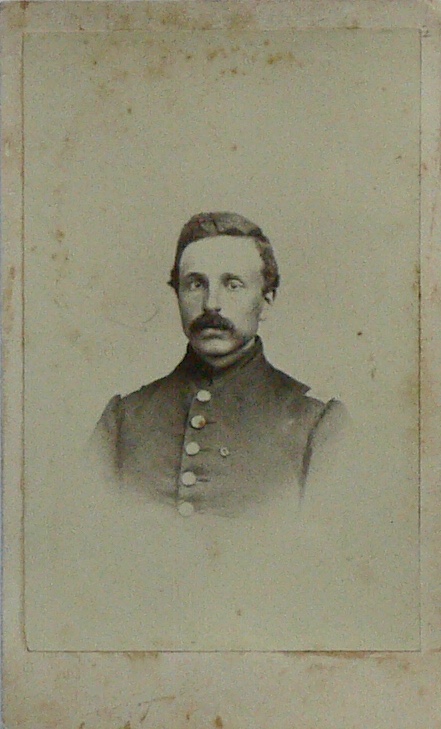 CASE 284. - Lieutenant W. E. Carter, Co. G, 4th Vermont, aged 33 years, was wounded at the Wilderness, May 5, 1864. He was admitted to Armory Square Hospital, Washington, on May 25th, when the injury was recorded as a "gunshot wound of the abdominal walls." On June 13th, he was furloughed, and on August 6th, was readmitted and subsequently transferred to Volunteer Officers Hospital, where he was admitted on August 10th, and from which he was returned to duty on August 12, 1864. Dr. George F. Stevens, late Surgeon 77th New York, in a communication received at this office in June, 1868, gives the following account of the case: "Within half an hour he received three wounds: first, through the abdomen, from left to right, cutting the intestine; second, a bullet wound through the hand, at the articulation of the upper phalanx of the thumb with the trapezium; third, a bullet wound of the left thigh, near the knee, the ball penetrating to the bone. The wound of the abdomen was made by some rough missile, either a bullet much battered, or a fragment of shell, or, as the lieutenant supposed, by an explosive bullet. It had entered at a point near the outer extremity of a line between the left inguinal and lumbar regions, and had made its exit at a corresponding point on the right side. In its course, the missile had wounded the intestine, and had torn the abdominal walls so as to allow the bowel to protrude from both the left and right wounds. He was taken to the hospital of the 2d division, Sixth Corps, when I returned the protruded bowels, and brought the wounds together by sutures. On the evening of May 6th, Lieutenant Carter, with the rest of the wounded of the Sixth Corps, was removed to Chancellorsville. On the evening of the 7th, as the army was to fall back, and as there was insufficient transportation for all the wounded, it was determined to leave those who seemed least able to bear moving. The surgeons, whose duty in was to designate those to be left, selected Lieutenant Carter, among many others, declaring that any attempt to move him would be absolutely fatal. After the rear guard had passed, in the retreat, Lieutenant Carter's brother and a wagoner placed him on a stretcher and carried him until they overtook the Vermont Brigade, three miles to the rear, when the commander of his regiment detailed men to carry him. After some time an ambulance was procured, in which he was carried until evening, when he was transferred to another ambulance, in which he rode all night, reaching Fredericksburg at daylight on the morning of the 9th, and finally obtained comfortable quarters. I found him, on the 10th, suffering considerably from his wounds, and with a high inflammatory fever. Water dressings were applied to the wounds, with ice to those of the abdomen, and opium was freely administered. Like most other wounded men, he became very anxious to have a movement of the bowels, and begged for cathartics, which were refused. On the 12th, an officious agent of the Sanitary Commission, hearing of his distress for physic, procured and administered to him a large dose of castor oil. Cathartic action soon commenced, and matter was discharged freely from both orifices made by the missile. Immediately upon discovery of the mischief, I administered a very large dose of opium, and he was kept fully under the influence of that drug for several days. The severe inflammatory symptoms gradually subsided, though fecal matter continued at times to escape from the wounds. May 24th, he was sent to Washington, to Armory Square Hospital, this being the twelfth time he was moved after receiving his wounds. Recovery progressed steadily; fecal matter frequently passing from the wounds until healing took place, which was early in July, when both orifices were closed, the intestine adhering to the abdominal wall. He returned to his regiment in August, but, finding the duties of the command of his company too severe for him, he resigned. In a letter to me, dated May 31, 1868, he says: "The extent, of disability remaining is two ruptures, a useless thumb-joint, and a good deal of pain in my left leg." Previous to rejoining his regiment he had been promoted to a captaincy, which he resigned September 14, 1864, and was discharged the service. Examining Surgeon C. P. Frost, of Brattleboro, Vermont, reported April 18, 1868: "Ball entered left inguinal region of abdomen, just above and external to the left internal abdominal ring, and came out nearly at the corresponding point on the opposite side. The intestinal coats were perforated, as was made certain by a fecal discharge from the wound for nearly a month after it was received. There is a hernial protrusion at the point of entrance of the ball, which compels him to wear a truss. At the point of exit the abdominal walls are weak, and much more pain is felt there than when he was originally pensioned, still further incapacitating him from labor than it did at that time. He was also wounded by a musket ball, which passed through the metacarpo-phalangeal articulation of right thumb, producing anchylosis of that joint. A musket ball was also lodged in the popliteal region of the left leg, and was extracted. Disability seven-eighths." Last paid to March 4, 1873.