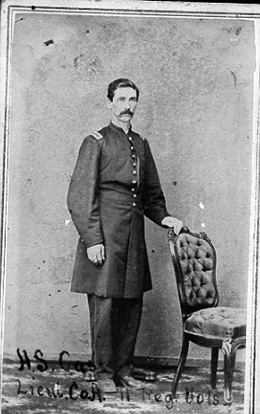 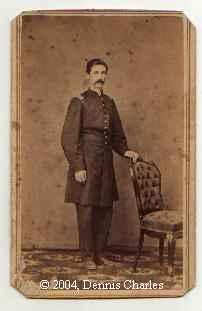 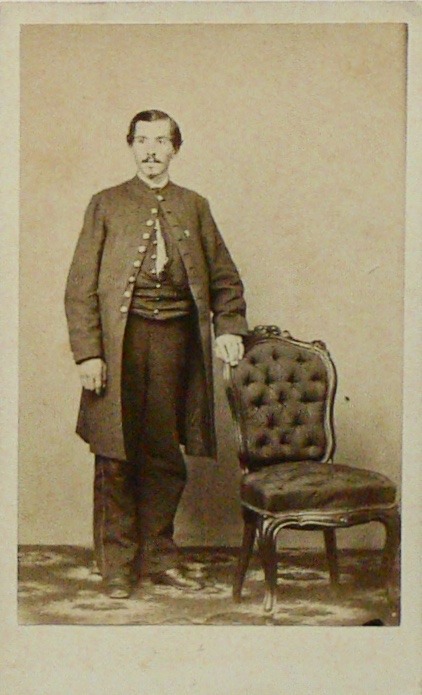 Harvey Stevens Castle (pictured above), a 22 year-old resident of Castleton enlisted on August 15, 1863 as a Private in Company M, 11th Vermont Infantry.

On February 21, 1864 he was promoted to Corporal, and on June 17, 1865 to Sergeant. His dedication to his country, and his belief in the cause, allowed his superiors to transfer him to Company D, and on June 24, 1865 he was commissioned 2nd Lieut.

After two years and nine months of service Harvey mustered out on August 25, 1865, and returned to Castleton. On December 24, 1868 he married Harriet Ann Strong. The couple can be found in the Castleton census through 1880, and in 1890 they are found living in Ogdensburg, Wisconsin where they died.

Nineteen-year-old William Henry Castle, brother, enlisted on August 18, 1861 as a private in Company C, 11th Vermont Infantry, and was promoted to Corporal on June 28, 1864. He served four years.

The men were credited with fighting at Cedar Creek on Oct 19, 1864 where William was wounded. He was also wounded at Petersburg on April 2, 1865. Upon his return to Castleton, he married Pauline Gouche on June 1, 1868 at the home of his parents. The couple raised Ada Emma, Hallie J., William Adolphus, and Walther H. William died on September 28, 1890.

Harvey and William were the sons of Harvey and Gratia Walkins Castle.

Castleton supplied 250 men in defense of their country. The unit was organized in Brattleboro as the 11th Vermont Infantry on September 1, 1862. "The First Artillery, Eleventh Vermont Volunteers, was the largest Vermont regiment. Its aggregate membership, officers and men, was 2,320. It was originally recruited as an infantry regiment in the summer of 1862. Being assigned to duty in the Northern Defences of Washington, it was soon changed from infantry to heavy artillery by order of the War Department, and its enlargement to the regular heavy artillery standard was authorized. Further recruiting followed, which resulted in giving it twelve companies (called batteries) of one hundred fifty men each, with three Majors, with four Lieutenants to each battery. The number of non-commissioned officers was also enlarged."

The 11th Vermont participated in some of the bloodiest battles of the war, including Spotsylvania Court House, May 15-21, 1864; North Anna River, May 23-26, Totopotomoy, May 28-31, Fort Stevens, July 11-12, Snicker's Gap expedition, July 15-23, Sheridan's Shenandoah Valley campaign on August 7-November 28th and Appomattox March 28-April 9th, to mention only a few. The regiment lost a total of 576 men from battle and disease in defense of their country. Old members mustered out June 24, 1865. Veterans and recruits consolidated to a Battalion of four Companies, and duty at Fort Foote, Md., Defenses of Washington, until August, and mustered out August 25, 1865."