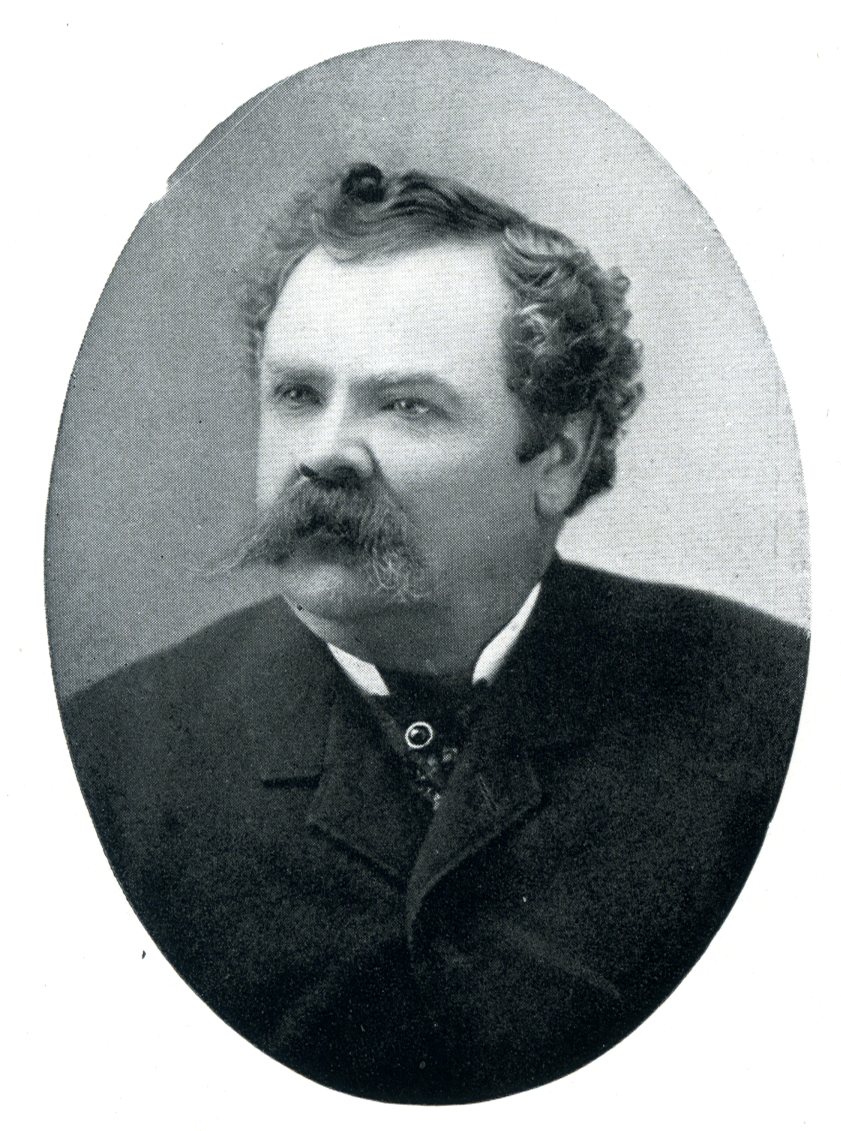 CORPORAL ANDREW JACKSON CHADWICK volunteered from the town of Franklin August 25th, 1862, and at the time resided in that part called East Franklin. He was a chum and loyal friend of Lieutenant Marsh, and ready at all times to advance or defend his rights. He was at this time 21 years of age, five feet, nine inches tall, big and strong and weighed 250 pounds in blouse and trousers and army shoes. His confident way of expression and determined looks persuaded most of us at sight that it would not be wise to run up against him in any unfriendly manner. At our first meeting September 11th, 1862. at Highgate, the date of election of company officers, it was much in evidence who his first choice was for second lieutenant, and his words of preference were emphatic and to the more timid of us weighty at least. We had no desire to express any doubt to him as to his friend Marsh being the best man for the position of second lieutenant.

When First Corporal Sumner H. Jennison was promoted to fifth sergeant. Private Chadwick was elevated to the quite responsible position of first corporal, jumping from the ranks to the head of the corporal list. We had at this time ten corporals, two more than the regulations allowed, but this was all right, as long as we remained in Highgate, and I presume it was true as hinted at the time there was a large number of Company K boys who considered themselves highly qualified for these official places, and to satisfy as many as possible and encourage laudable ambition the commissioned officers. Captain Clark and Lieutenants Brown and Marsh hit on the happy expedient of adding two more than usual to the list, you can see therefore why Lieutenant Marsh had Andrew Jackson made First Corporal, for if all were set up a notch and Jack put at the foot when we reached Brattleboro and were mustered in and chevrons were distributed eight would be the limit and Jack would be left out and that would not do and undoubtedly his friend, Carmi Marsh understood this and had him made first corporal. It was a little humiliating to the ninth and tenth corporals, Hibbard and Frink, to be left out in this manner. They were never quite satisfied with the explanation offered, however, both Hibbard and Frink, were remembered in due season as will appear.

No other first corporal with such an admirable figure and presence so well fitted for the arduous duties of corporai as First Corporal Andrew Jackson Chadwick of Company K. He was the heavyweight of Company K, and his 250 pounds was largely bone and muscle. In all feats of strength, rough and tumble, catch as catch can, side or back hold, or collar and elbow, Corporal Chadwick was champion of Company K, but quite a number gave him a hard struggle and Private Hardy Ladue, a young ialacksmith from Alburg, was quite his match at collar and elbow, and many a day in Company K street at Camp Occoquan did they wrestle till each were exhausted without apparent victory to either. Jack had the most science and was by far the heaviest, but Ladue was quick and eel like and could not be thrown to the ground square on his back, so not a fall as was said. The wrestling bouts brought many spectators from other companies to watch the fun. Considerable strife arose and Company K boys did considerable bragging and were ready to back Corporal Chadwick with any man in the regiment with their greenbacks and scrip and sutler's checks. I had noticed on these occasions one ot Company G boys who was always present and watching carefully every lock and twist and trip of the wrestlers, but said not a word. I knew him and had seen him wrestle on Fairfield Green on election days with Mick Kirk, Andrew Sherwood and others; likely no other ot Company K had knowledge of his skill and fame at home.

One day while visiting with Company G boys for many ot them I knew, before we enlisted, it was hinted, and I was requested not to say a word, that there was a prospect for a match of wrestling between Company K and Company G, that Company G had a wrestler, but he was just recovering from a fever, and as soon as he was well enough thought a match could be arranged. Nothing more was said for some time about the match between Company K and G, but the wrestling went on from time to time and now and then a fellow would try titles with Corporal Chadwick, but none were able to stand up before him, but after a while a Company G man, a good looking and proportioned as often seen, was prevailed upon by much urging and prodding, and finally) with much apparent reluctance took hold of Corporal Chadwick in a rather awkward and careless manner, but acted afraid and stood off bracing up so that he could not be tripped, or be caught in Jack's fatal hip lock, which had cost many an unsuspecting fellow before, but the Company G man had watched Corporal Chadwick and took note of his particular skill and did not easily fall into the trap. After a few trials Company G men not showing up very well. Company K boys were ready for the match. Jack assured the boys he could throw the Company G man right over his head as easy as rolling oft a log, and they need not be afraid to put up their dosh, he would see that they did not lose. The day was fixed a week ahead, umpires chosen, all details agreed upon, a smooth level plot of ground, just in the rear of camp was selected. The day and hour arrived and the regiment gathered in a large circle around the would-be champion. A few preliminaries were completed and all was ready, excitement ran high and the betting by Company K was two to one on their favorite corporal. The young aspirants for fame now faced each other carefully and securely grasping collars and elbows at once commenced the fencing with feet and hands, watching for a favorable opportunity to lock, trip and twist. Company G man appeared less timid now, for the hour that he had been playing and watching for was at hand, and was exhibiting unexpected skill and new antics in the ring. Our corporal found that Company G man stood firmly on his feet and labored with all his great strength to win the bout quickly. Corporal Chadwick grew red in the face, great drops of sweat coursed along his massive forehead and down his cheeks in his manly efforts to close the contest, and show the assembled sports that the clan from East Franklin was equal to the occasion. Company G man hopped and jumped about first on one foot and then on the other, and every now and then one foot would fly up on the corporal's side and down again so quick it hardly could be seen. Cheer after cheer rang out first by Company K and then by Company G. It was soon apparent among my comrades of Company K they were losing confidence and might after all lose the bets so lavishly put up. After Company G man had worried and sufficiently tired out the corporal, he suddenly and quickly took the famous Fairfield Ju Jitsu lock and over his head, heels in the air down to the ground square on his back came the champion of Company K. The ground trembled as he fell, but no bones were broken nor was the corporal severely injured.

One long, loud and exulting cheer filled the air in which Company K took no part. Now everybody was making inquiry as to who this Company G man was, and where he came from. It was no less a person than John McMahon, the famous boy wrestler, of Fairfield, and since the war has won, and it now hangs in his room, the belt for the world's champion collar and elbow wrestler. Greenbacks, scrip and sutler's checks were scarce with the boys of Company K for some time after but Company U had plenty. This was Jack's last wrestling match, and he was wis.er, and now gave his whole attention to his official duties. Company K, though humiliated, gracefully parted with their dosh, and cheerfully submitted to the loss of prestige, but never again while in the service did so much bragging.

Corporal Chadwick was a good and valiant soldier, remained with his company till the last and was mustered out July 2.1st, 1863. Since the war he has travelled over his country from the Atlantic to the Pacific, and in many of the states. For the last twenty years or more, he has resided in the town of Enosburg, in the employ of his life long and loyal friend and comrade. Lieutenant Carml L. Marsh. He looks older, but is still the same noble hearted and generous fellow as in the old days when we knew him as corporal of Company K. The full name of Corporal Chadwick is Andrew Jackson Chadwick, and was born in Franklin, September 27th, 1841, and at the date of enlistment his occupation was that of a farmer. You will see on page .....

See roster of this book a brief sketch, and a picture on page 406 corroborates my judgment of him. He married after the war, and now in the evening of life his marital relations are happy and he enjoys the good will of a large circle of warm friends. Since the writing of the above Comrade Chadwick has joined the silent majority. Died in 1908; was buried in Enosburg, Vt.

Veteran of 13th Vermont Long in Business at Enosburgh Falls.

Enosburgh Falls, Aug. 6. - A.J. Chadwick, aged 66 years, died suddenly of heart disease at four o'clock this afternoon. He had been ill health since March. For many years he was associated with C. L. Marsh in the grist mill business and a part of his life was passed in San Francisco where a son, Homer, now lives. Mr. Chadwick was born in Sheldon and married Miss Myra Mitiguy of Enosburgh Falls, who survives him, with a brother, William Chadwick of Sheldon. Mr. Chadwick was a member of Pixley Post, G.A.R., and served in Company K, 13th Vermont volunteers. The funeral will be held Saturday morning at 10:30 o'clock with burial in Main Street cemetery , the Rev. W.T. Forsythe officiating.