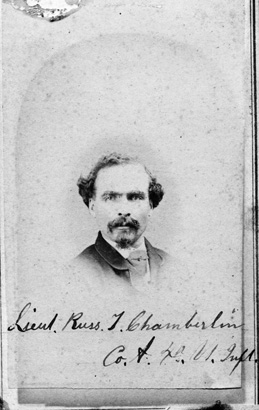 PIONEER OF PORTAND IS CALLED BY DEATH

A past commander and prominent member of George Wright Post No. 1, GAR, was Russell T. Chamberlain, who died recently at the age of 77. Born in Vermont, he fought through the civil war, coming to Oregon in 1879.

Enlisting in Vermont in August, 1861, Mr. Chamberlain was a member of the "Vermont Brigade, " said to have suffered more casualties than any other brigade on the Union side during the Civil War. Williamsburg, Fredericksburg, Antietam, Wilderness, Petersburg, Spottsylvania, Charleston and Cold Harbor were among the bloody engagements his regiment went through.

Mr. Chamberlain was a First Lieutenant at the end of the war. He was wounded twice and was a prisoner at several southern camps.

Surviving are a widow, an honored member of the Woman's Relief Corps; a son, J. Edgar Chamberlain, a Spanish War veteran and another son, Earl R. Chamberlain.