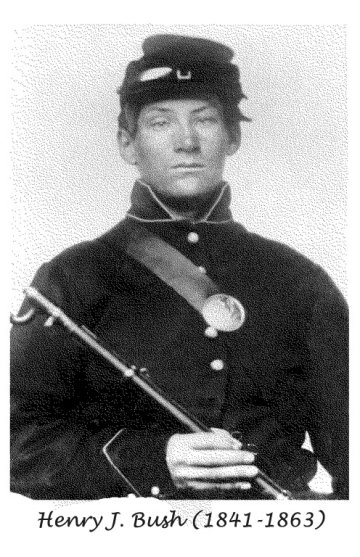 Henry Bush worked on his father's farm, attended church with his family, and was educated in Brookline and Townshend Vermont. At the age of 18, Henry made a trip to Utica, Minnesota to find work among several Brookline families that had moved there. Henry worked for a while for or near Thomas Stebbins. We don't know when Henry returned to Brookline.

After the outbreak of the Civil War, Henry Bush was one of the first Brookline boys to volunteer for the army. In July 1861, Henry rented a horse and buggy and rode 10 miles to Brattleboro to enlist. When he arrived, he discovered that he had to stay at a boarding house for a few days until enough men had been enrolled to form a company. He became part of Company F, Fourth Vermont Regiment. Other Brookline boys who joined him in Company F were Hibbard G. Holden, Samuel A. Fairbanks, Ira A. Higgins, and Celon J. Ball.

Henry's medical record shows that at the time of his enlistment, he was 20 years old, 5 feet 5 inches tall, had dark hair, blue eyes, and a dark complexion. He was of Dutch and English ancestry.

Sunday, May 3rd 1863, began early as Henry and his regiment were attacked by General Jubal Early's forces at 5 AM. By 10 AM they had beaten back the attackers and were moving north towards the southern Fredericksburg Heights. Henry helped capture the southern portion of the heights as they swept the rebels away. Early's forces abandoned the heights and evacuated to the west towards Chancellorsville, down the Plank Road. For a short while, Henry's division was posted near Marye's Heights to guard these newly acquired positions. By morning, May 4th 1863, the VI Corps was moving down the Plank Road in order to reinforce Hooker who was being beaten at Chancellorsville. Henry and the rest of Howe's division were posted as rear guard for this march. Around 4 PM the lead division met resistance near Salem Church. Henry and his division were about 2 miles back, deployed north of and parallel to the Plank Road. By late afternoon, Sedgwick's VI Corps was attacked by the divisions of CSA Generals Anderson, McLaws, And Early. The VI Corps soon found itself boxed in between the rebel forces and the Rappahannock River. To meet the crisis, Brook's division is pulled back, and Howe's division, with Henry, is extended in line of battle to the river. By 5 PM, General Howe had placed his troops in two positions. In front was the Third Brigade on the crest overlooking a ravine which the Rebels must pass. Behind the brigade was another wooded ravine. In the rear of the second ravine, behind a rising, the Vermont Brigade formed the second line of battle. About 6PM, Generals Early, Anderson and McLaws massed their troops and charged Howe's division. The attack was fearful and Howe ordered the Third Brigade to fall back. The badly beaten regiments in front were to fall behind the second line held by the Vermonters. The Third Brigade continued falling back until they were a comfortable distance from the Rebels.

If the Vermont troops could just hold off the attackers until dark, the combination of darkness and fog would allow them to retreat to Banks Ford and escape. Just before dark, in the final attack, while the Vermont Brigade was being pushed back by the Rebels, Henry J. Bush, age 21, was shot and killed.

It is with a sad heart that I seat myself to inform you of the death of your son Henry. You have probably seen ere this by the papers that he was killed in the late battle near Fredericksburg. He was killed Monday night, shot through the body near the heart. He never spoke after he was hit and as we were drove from the field we had no chance to bury him. The rebs occupied the ground in less than 15 minutes after he was shot. He had a watch and $20 dollars in money which I took and have it now in my posesion and will send it to you as soon as you will write me and tell me how to send them. He was a good soldier and beloved by all who knew him. Write as soon as you get this and tell me whether I shall send the watch and money by mail or keep them until I have a chance to send by some one.

It is with a sad heart that I convey to you the following:

On the afternoon of the 4th of May, we lay in line of battle awaiting the approach of the enemy who were then advancing on our lines. The outposts were driven in & the 4th Vt Regiment, with the rest of the Brigade, were marched to the front.

We soon were in the hottest of the fight & during the battle Henry received a ball in his body which caused his death, yet he lived for some time though his senses had left him.

His watch & money were taken from him by Orderly Sergt Luke W. Kendall of Co F, which will be forwarded at your request. Henry has been my partner or tent mate for a good while & I miss him much. He was a good soldier & always done his duty well. If there is anything in my power that I can do for Henry's parents in regard to his effects left, if they will write I shall be most happy to do so. You have the kindest sympathy from a true friend of Henry.