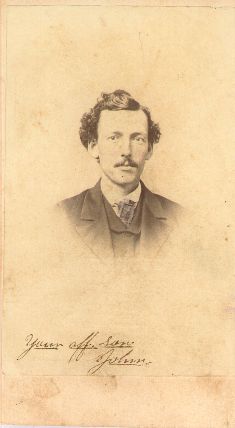 John Healy Buxton was born in Woodstock, Connecticut on July 24, 1842. The son of Simeon and Caroline Boyden (Bullard) Buxton, he had three brothers: William, Harris, and Anson. The family moved to Worcester, Massachusetts about 1846, where John's father was a builder. In 1855 Simeon was in Rutland, Vermont, and had a manufacturing business. By 1857 they lived in Montpelier, where John's father had a large foundry and a sawmill on the Winooski River and manufactured waterwheels. John's father was also an inventor, owning patents for a variety of important sawmill and waterwheel improvements. John followed his father's example. He loved the workings of machinery; he grew up learning the business, and worked in the foundry as a machinist.

On May 2, 1861, John was among the first in Montpelier to enlist in Co F, 1st Vermont Infantry as a private. He was eighteen, six feet tall, with brown hair and hazel eyes. His company fought at Big Bethel, often called the first battle of the Civil War. He was discharged on August 15, 1861. On September 11, 1861 he was the first to enlist at Montpelier in the 1st Vermont Cavalry, joining Co C. A private, John fought in the Valley Campaign, and endured the hardships of Banks' Retreat. His obituary states that he was a scout, and was commended for his service. He often spoke of his adventures, and stated that he had two horses, "Stubs" and "Lady Carrigan", shot from under him. He received a medical discharge on November 21, 1862 for a back injury, which, in 1912, he attributed to the fall of his horse.

"Then the next summer, while in Boston, I saw an advertisement of bounties offered at the enlistment office, and received the bounty, as I supposed, and afterwards enlisted as a first class fireman as a substitute for someone else, I know not what the name was, and which I have deplored ever since." John served from July 6, 1864 to the end of the war, being discharged at Norfolk, Virginia on April 18, 1865.

After the war, John located in Baltimore, Maryland and married Jane Elizabeth Curtis on March 27, 1866. They had four children. John was noted for his mechanical talents. In 1876 he set up a windmill business in Baltimore. In 1885 he bought an 80-acre farm at Buxton, on the B & 0 Railroad near Laurel, Md. John returned to Baltimore and became interested in gold mining. He developed mines in Maryland, North Carolina, Canada and Nevada. In 1912 he built and patented a mill for crushing gold ore. A man of boundless energy, optimism and determination, he died of apoplexy on November 19, 1914. He is buried in Druid Ridge Cemetery near Baltimore. His Civil War papers and photographs were lost in a fire in 1885; only his G.A.R. medal remains.