Edward was a native of Montreal, Canada. His father died in that city when his boy was only four years old, left fatherless and with a mother unable to support him. He was given to a Mr. Wheeler living in New York state. As Edward retained the name of Cantwell. Wheeler could not have adopted him. He had scant opportunities to obtain an education. During his boyhood, about 1850. he moved to Franklin county, Vt., where he spent the rest of his life. His occupation both before and since the war has been that of farming.

To his adopted country he was loyal and patriotic. In the summer of 1862 he enlisted in the town of Berkshire and joined Company G, 13th Vermont. He served through his term and was discharged with his regiment. As a soldier he was obedient to his superiors, faithful in the discharge of duty and respected by his comrades.

At an early age he married Mary Scofield of Sheldon, Vt. The fruits of their marriage were Hannibal, now residing in Enosburg; Anna, wife of Thomas Longe of East Highgate; Clara, wife of James Hancock, Waterville. Me.; Charles and Edward who reside in Swanton. For the past twelve years his family have lived in Swanton. His health had been poor. He passed away, August 22nd, 1903. A few comrades followed his remains to their last resting place in Riverside Cemetery, Swanton. Comrade Sturtevant says of him that he appeared to be a well disposed and kind hearted man. May he rest in peace. His wife and children survive him. 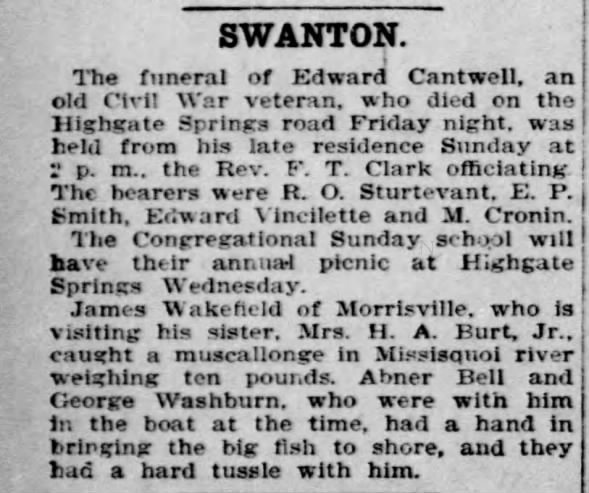