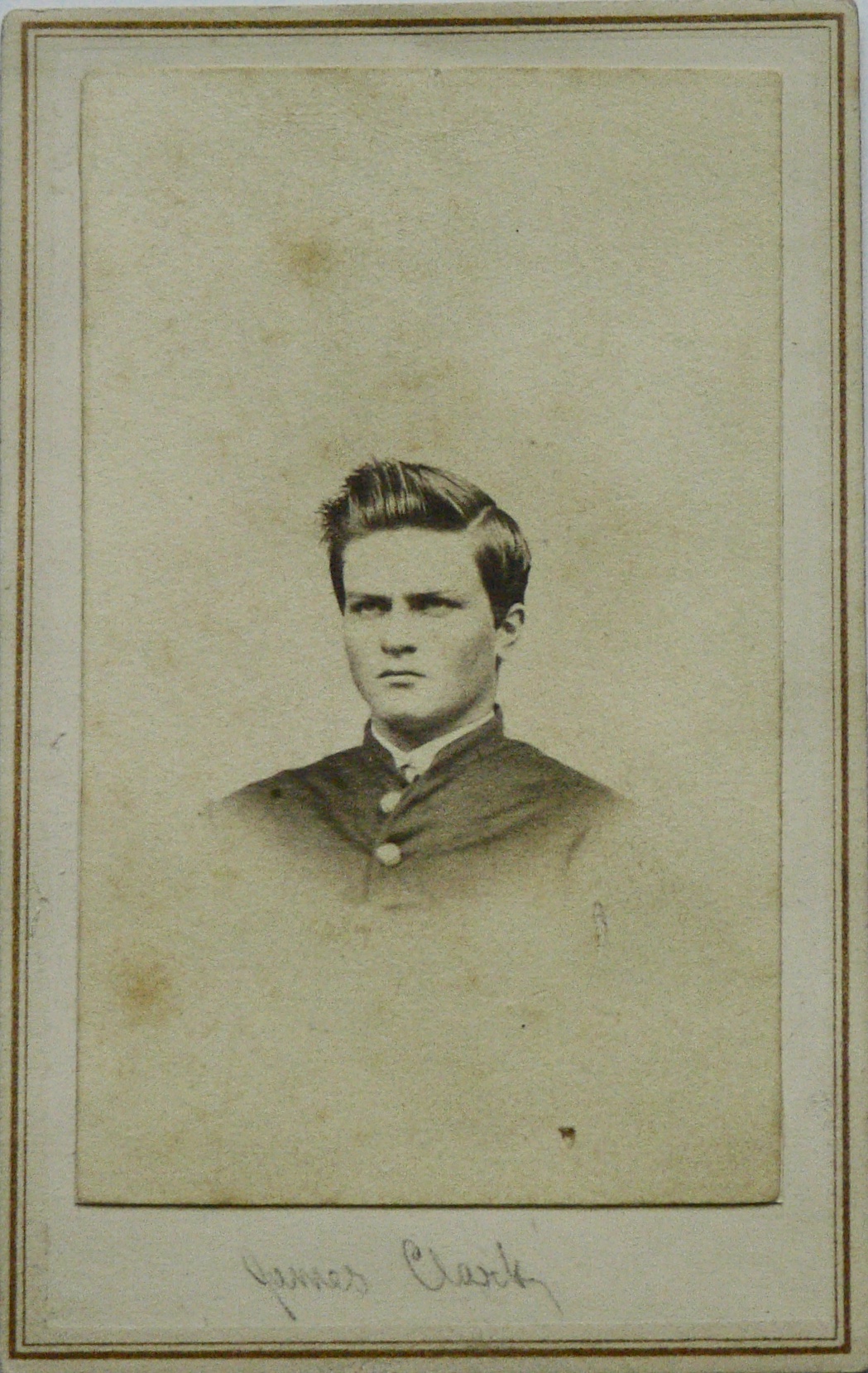 Twenty year old James Clark was a fine looking specimen of a soldier as he sat (or stood) for his carte-de-visite photograph in his new uniform at the unspecified photographer's studio. He had a boyishly handsome face topped off by a full head of dark hair piled high on a perfectly sculpted face. He looked as ferociously as he could past the camera lens at an imaginary enemy, but even his deliberate scowl could not hide the attractive features of his countenance. His stunning good looks, in or out of uniform, was the bane of every father around. Handsomer than most, young as many and full of promise in particular, made this vibrant, healthy youth's story that much more tragic.

James was a member of an ambitious and successful family. His father, Charles C. Clark (about 1812-1868), was a farmer in Lincoln, Vermont in 1850. He had a wife, Permelia Hawkins (aka Pamelia) (1813-1898), and four children on a $1,200 farm.[1] By the time Charles died eighteen years later, his real estate holdings (three separate parcels) of one hundred eighty-five acres, was worth $5,900. In addition, Charles possessed $1,415 in personal household and farm items. Besides developing a thriving and diversified farm operation, Charles also held notes of various amounts ($15-$400) by at least twenty-eight individuals and the Lincoln Union Meeting House for a total of nearly $6,200.[2] Charles was also very active in politics at both the local and State level. He served as Town Agent in 1868, as a delegate to the Republican State Convention in 1867 and as a member of the State House of Representatives in 1859 and 1860.[3]

When Fort Sumter in Charleston Harbor was fired on in April, 1861, James was living in Lincoln on the farm with his parents and most of his brothers and sisters. Elisha had married and left the home by 1860. Living with the Clarks' was a hired man named Frank Danforth, a twenty-three year old native Vermonter.[5] James was not one of the very first of the mad dash to enlist and head south to the front. He didn't make up his mind to become one of Mr. Lincoln's soldiers until after the First Battle of Bull Run in July of 1861. It was painfully obvious to the whole nation after that Union debacle that this war was not going to be either short nor easy. What had started out as a picnic soon turned into lengthy and bloody affair. And James was now eager to do his duty. He went to Bristol on September 30, 1861 and found Captain G. Parker, recruiter, who was pleased to sign James up for three years in the Sixth Vermont Infantry Regiment. The five feet eight inch twenty-three year old volunteer was immediately assigned to Company A of the Sixth.[6] The darkly tanned farmer with the thick black hair and grey eyes had to wait for another two weeks for the ranks of the Sixth to be completely filled before all the volunteers met at Montpelier on October 15 to be formally accepted into the service of the United States Army.[7] Eventually, both of James' older brothers would be tapped for military duty as well. Elisha would serve twice, in fact, both times in regiments from Maine. Howard would be exempted from military duty in 1863.[8]

The Sixth Vermont Regiment was raised from volunteers in all parts of the State within two weeks from the time Secretary of War Stanton contacted Vermont's Governor Erastus Fairbanks following the debacle of First Bull Run in July of 1861. Within thirty-three days of its formation and acceptance into the service of the United States Army, the Sixth was enroute to its first duty station in Washington, D.C. It was immediately sent to Camp Griffin near Lewinsville, Virginia where it joined the Second, Third, Fourth and Fifth regiments to form the First Vermont Brigade - the "Old Vermont Brigade". During the winter cantonment at Camp Griffin, the Sixth suffered terribly from diseases. There were 278 cases of typhoid fever, 330 of measles, 90 of diphtheria and 180 of mumps. Being used to clean air, isolation, eating wholesome and plentiful food and getting robust exercise doing their chores, the Vermonters were decimated by the cramped contact with urban carriers of diseases they had no immunity to, subjected to monotonous meals ill prepared and infrequently supplied, exposed to the elements and exhaustive duties and surrounded by sickness caused by the lack of reasonable sanitation in the camps perpetuated by the careless and torpid behavior of indifferent camp mates. The mortality among the vulnerable Vermonters was great, amounting to more than 50 deaths. Without any natural immunities to their infectious companions and considering the exposure and poor diet they were subjected to, the results in the ranks of the Vermonters was very similar to that which occurred among the native Americans of this country after their initial contact with white Europeans in the early settlement period of our history.

The Vermonters were glad to break their first winter camp on March 10, 1862 to take part in the Peninsula Campaign. It suffered severe losses at Savage Station along with other Vermont Brigade units. The Regiment did its share of fighting during the Maryland Campaign and served an active role at Fredericksburg. It went into winter camp in 1862 at White Oak Church. When it broke camp in the spring of 1863, it joined in the Chancellorsville movement. There, and at Gettysburg and Funkstown, the Sixth distinguished itself in combat. After being a part of the Mine Run Campaign of 1863, the Regiment went into winter quarters at Brandy Station, Virginia. In the Wilderness Campaign of 1864, the Sixth was subjected to arduous and tragic work, suffering terrible losses. It was part of the famous assault at Spotsylvania and was repeatedly in action at Cold Harbor. Soon after arriving at Petersburg, the Sixth Corps, of which the Vermont Brigade was a part, was ordered to the defenses of Washington. They rejoined the Army of the Potomac in December of 1864 for the remainder of the Petersburg siege. In October, 1864, the original members not re-enlisted were mustered-out. After Lee's surrender at Appomattox, the rest of the Regiment was mustered-out on June 19, 1865.

When Muster Roll for Company A was called on November 30, 1861, just six weeks after being sworn in to active duty, Private Clark was listed as neither present nor absent - he was merely noted as "not stated". He remained as such for the next two musters of December 31 and February 18, 1862. It wasn't until the next roll call of March/April, 1862 that he was actually listed as "present".[10] In April, 1862, the Sixth Vermont as part of the Fourth Corps, Army of the Potomac, began the Peninsula Campaign by marching up the peninsula from Fortress Monroe. They engaged the enemy at Yorktown and Williamsburg on their march to Richmond. May 13, 1862, the Sixth was made a part of the Sixth Corps. It then marched from White House Landing to the Chickahominy River where it went into camp at Golding's Farm on May 19. June 25 saw the Seven Days Battle around Richmond begin.[11]

On June 27, Confederate forces made a reconnaissance in force to determine the location and strength of McClellan's army. Brigadier General John B. Magruder launched a sharp attack at dusk against Brigadier General William F. "Baldy" Smith's VI Corps division near Old Tavern at the farm of James M. Garnett. The attack was easily repulsed by the brigade of Brigadier General Winfield S. Hancock containing the Sixth Vermont Regiment.[12] It was during this "skirmish at Camp Lincoln" on June 27 that Private Clark was wounded in the shoulder by a Confederate Minnie ball.[13] James was sent to the Regimental Hospitable for treatment immediately.[14] By July 12, 1862, the Green Mountain Freeman reported James Clark of the Sixth Vermont as wounded and left at Savage Station.[15] Whether this was how James' father found out about his son being a casualty or not was unknown. However, the information came to hand, Charles C. Clark went south to get his son and bring him back to Vermont for treatment and recovery. Charles found James in a Baltimore, Maryland hospital suffering from his shoulder wound. Charles was successful in procuring a thirty day furlough for James and headed for the Green Mountains.[16] But James' condition was deteriorating rapidly. When father and son got to Troy, New York, they were forced to stop by James' weakened condition. The Troy Times had the unpleasant task of reporting on July 19 the following:

Charles had to finish the journey home with the silent and still body of his third son in the baggage car. James was laid to rest eternally in the Brigg's Cemetery in Bristol.

DEATH OF VERMONT SOLDIER--THE TROY TIMES OF SATURDAY, JULY 19TH HAS THE FOLLOWING:

On Monday last a wounded Vermont Soldier, named John (sic) Clark, a member of the 6th Vermont regiment, arrived at the American House in charge of his father. The poor fellow, although a few miles from home could go no farther, and was obliged to remain at the hotel, where from his parents and friends had the best possible care and attention. Last night the unfortunate soldier, after suffering nearly three weeks from his wounds, died peacefully and calmly. He was shot in the breast on the 4th of July, on the last desperate efforts of the rebels to drive our army into the James River.

Clark was a native of Lincoln, Vermont. His remains will be taken home for burial this evening.