Rank and Organization: 1st Lieut. and Regimental Quartermaster, 6th Vermont Infantry.
Place and date: Near Warrenton, VA, 28 Jul 1863.
Entered service at: Montpelier.
Born: 25 Oct 1830, Moretown.
Died: 4 Aug 1898.
Buried: Green Mount Cemetery, Montpelier, VT
Date of Issue: 17 Aug 1891.
Citation: Defended the division train against a vastly superior force of the enemy; he was severely wounded, but remained in the saddle for 20 hours afterward until he had brought his train through in safety. 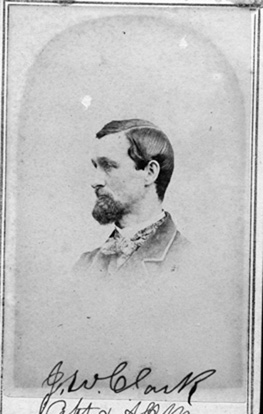 Captain John Wesley Clark was born in Moretown, Vermont, October 22, 1830, and received his education in the common schools and at Newbury Seminary. He began the battle of life when but a lad, and by his persistent energy and good judgment overcame all obstacles. In 1849, more than a year before attaining his majority, he took the overland route for California, at Little Rock, Arkansas, joining a party of sixty who were making the trip in typical "prairie schooners," provisioned for several months. Reaching the point of his destination, he was engaged in mining and mercantile pursuits for several years, and took an active part in public affairs, serving for some time as sheriff of Mariposa county, and being a member of the Vigilantes. On his return to Vermont, he established himself in business in Montpelier, being successfully engaged as a carriage manufacturer until the breaking out of the Civil war. On September 28, 1861, he entered his country's service as quartermaster of the Sixth Vermont Volunteer Infantry and participated in several important engagements, including the battles of Lee's Mills, Williamsburg, Golding's Farm, Savage Station, White Oak Swamp, Crampton's Gap, Antietam, Fredericksburg, Maryland Heights, Gettysburg, and others of minor importance. While in charge of a wagon train guarded by convalescent soldiers, on July 28, 1863, near White Plain, Virginia, he was wounded while repelling a charge of rebel cavalry, for gallant conduct during the engagement being awarded a medal of honor by Congress. On April 7, 1864, he was promoted to captain and assistant quartermaster of volunteers. Returning to his home at the close of the conflict, he resided in Montpelier until his death, August 4, 1898. A wide-awake, energetic man, possessing great force of character, liberal-minded and sympathetic, he was recognized as a patriotic, loyal citizen, and his portrait, entitled "A Vermont Hero," rightfully occupies a conspicuous position in the Wood Art Gallery at Montpelier. He was a member of the Loyal Legion, Vermont Commandery. Captain J. W. Clark married, in 1854, Betsey Ann Dewey, daughter of Osman and Rebecca (Davis) Dewey, and great-granddaughter of Jacob Davis, the founder of Montpelier. She is still living, making her home with her only son, Colonel Osman D. Clark, in the house where her entire married life has been spent.