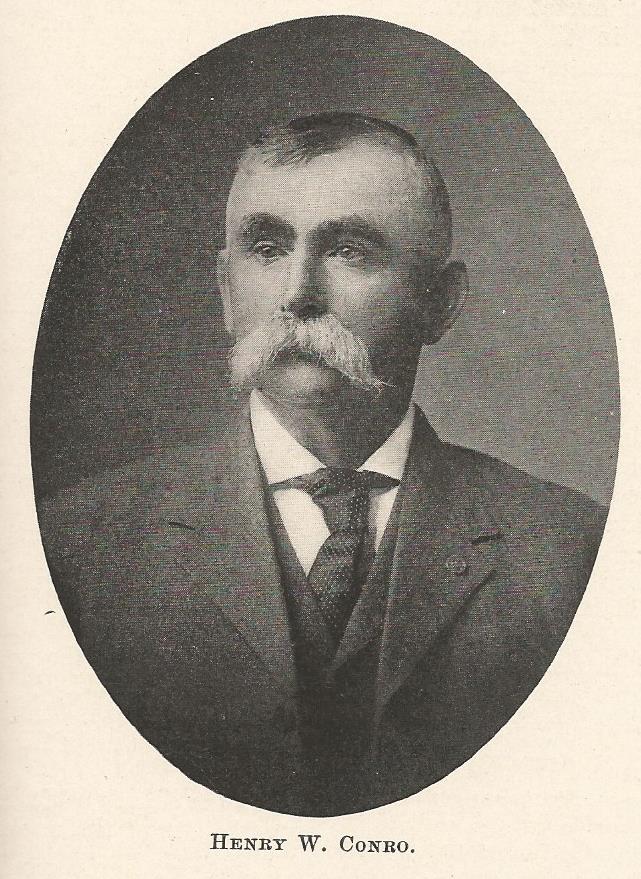 CONRO, Henry White, son of James and Arzelia (Pixley) Conro, was born at South Hero, January 20, 1842. His father came from Dutchess County, New York, at nine years of age, and from that time made his own way in life; was a farmer, and for a time kept the "Island House." Of the family of four children Henry is the only one residing in this town. He attended the public and select schools of his native town, and as a student of the University of Vermont; enlisted early in 1861 for three years, and was assigned to Captain John T. Drew's Company G of the Second Vermont Volunteers.

He participated with his regiment in the first battle of Bull Run, in which he was captured and taken to Libby Prison at Richmond, where he endured many hardships and a severe run of typhoid fever. In November he was transferred to Tuscaloosa, Alabama, until March, and thence to Salisbury, North Carolina, where he was paroled in June, 1862. He returned to his home on parole, a mere skeleton, and was successively transferred to the marine hospital at Burlington, Vermont, the parole camp at Annapolis, Maryland, and at Alexandria, and after regaining his health rejoined his regiment, January 1, 1863. From that time forward he participated in every engagement, 18 in number, in which his regiment fought, including the Wilderness, where he was wounded in the shoulder. He was honorably discharged, June 29, 1864.

Returning to South Hero, he taught two terms at the academy, made an inspection tour in the West, returned and in February, 1867, married Susan Robinson of South Hero, who died in May, 1868. During this period he conducted the Z. G. Clark farm, and for a year or two a store at Keeler's Bay. In March, 1873, Mr. Conro married Emeroy Hodgkins of Grand Isle, a daughter of C. T. Hodgkins and a granddaughter of William Hodgkins, a Revolutionary soldier, and one of the early settlers.

They soon removed to their present fine farm of 180 acres, located one mile from the village, and commanding a beautiful and expansive view of Lake Champlain, with mountain sentinels on either hand. Although 65 years of age, Mr. Conro is still an energetic and successful farmer, with a good dairy of 25 Jersey cows, with young stock and sheep.

An active Republican of independent opinions, he has served many years as moderator, also in most of the other town offices. He represented South Hero in the General Assembly in 1874, and was sheriff of the county four years; also four years a member of the Republican state committee. He is a member of Stannard Post, G.A.R., of Burlington, also a member and past master of Isle of Patmas Lodge, No. 17, F.&A.M. He is an excelent type of Vermont's soldier citizens. Mr. and Mrs. Conro have an only daughter, May, a young lady of culture, and a graduate of the University of Vermont.