In Hospital, June 7th, of wounds received by a sharpshooter on the battlefield of Coal Harbor, Nelson O. Cook, of Weston, of Co. H, 10th Reg't Vt. Vols., aged 40 years.

The deceased was a brave soldier and a kind husband and father. He has left a widow and two children to mourn his loss. His funeral services were attended in the Baptist meeting house in Weston. Sermon by the pastor, Rev. T. B. Eastman. Text, Job 7:10, "He shall return no more to his house, neither shall his place know him any more."

Nelson O. Cook was born 6/5/1824, possibly in Weston, Vermont. Nelson married Sarah Burgess (1922-1905), nee Proctor, a native of Massachusetts, on 1 June 1848, in Philadelphia, PA. In 1860, he and Sarah, and sons Charles, age 12, and Clement, age 10, were living in Weston. Nelson was a day laborer. The two sons were also born in Massachusetts, so Nelson and Sarah must have moved there almost immediately after they were married. 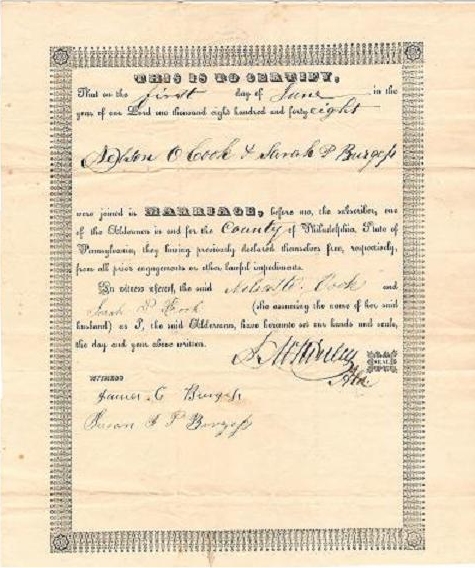 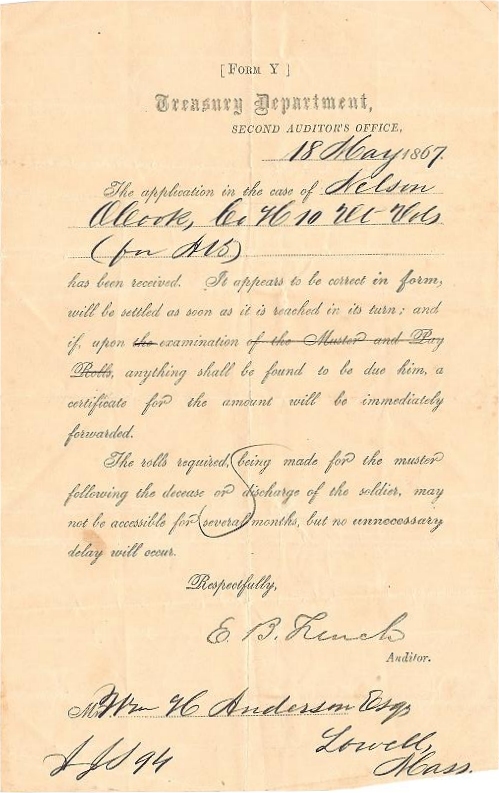 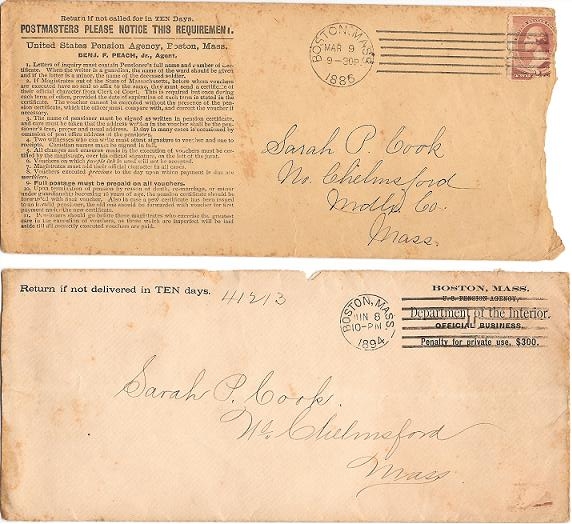 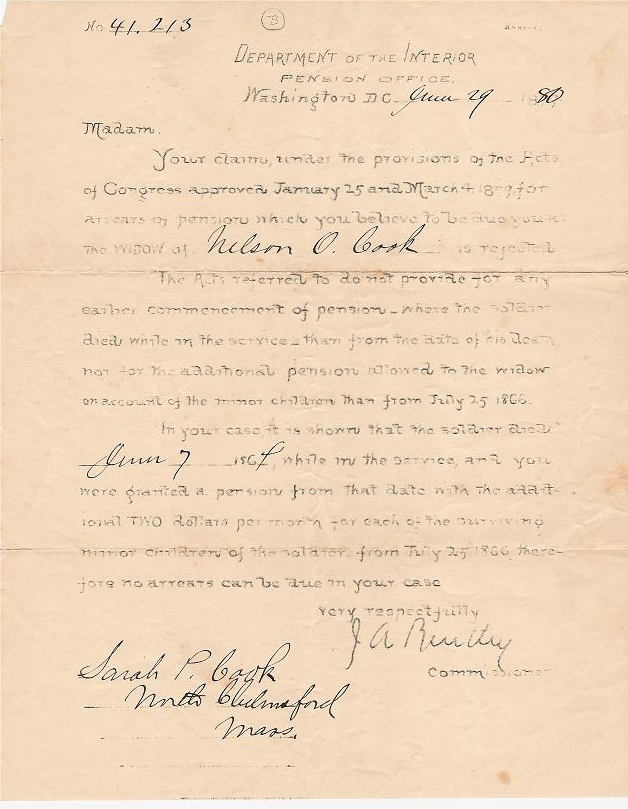 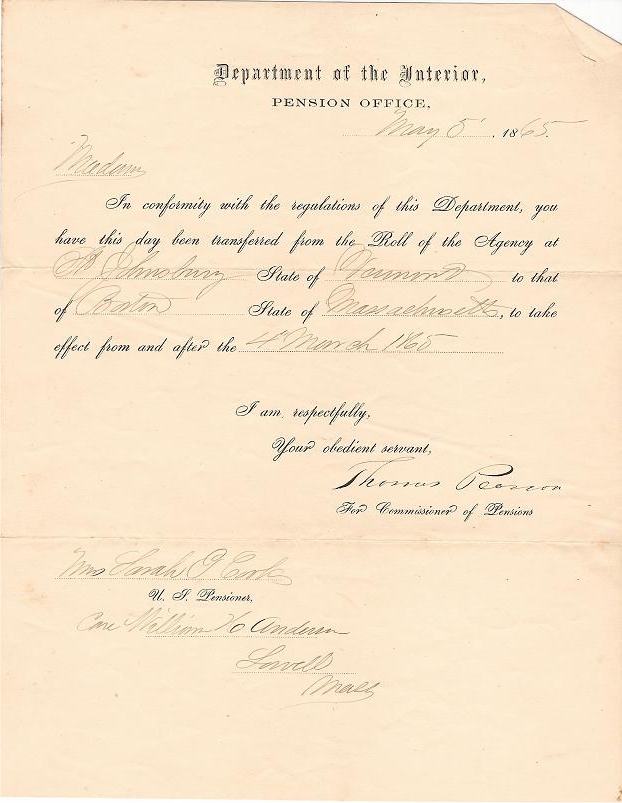 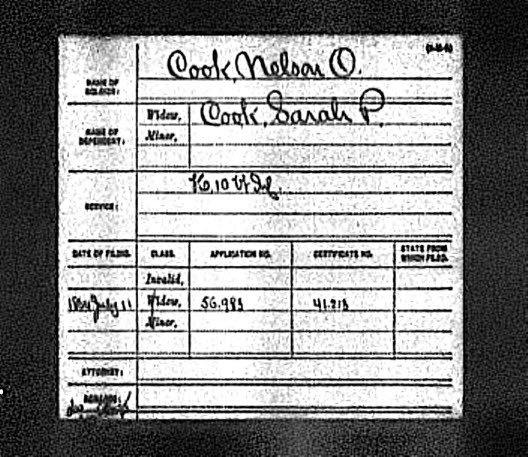 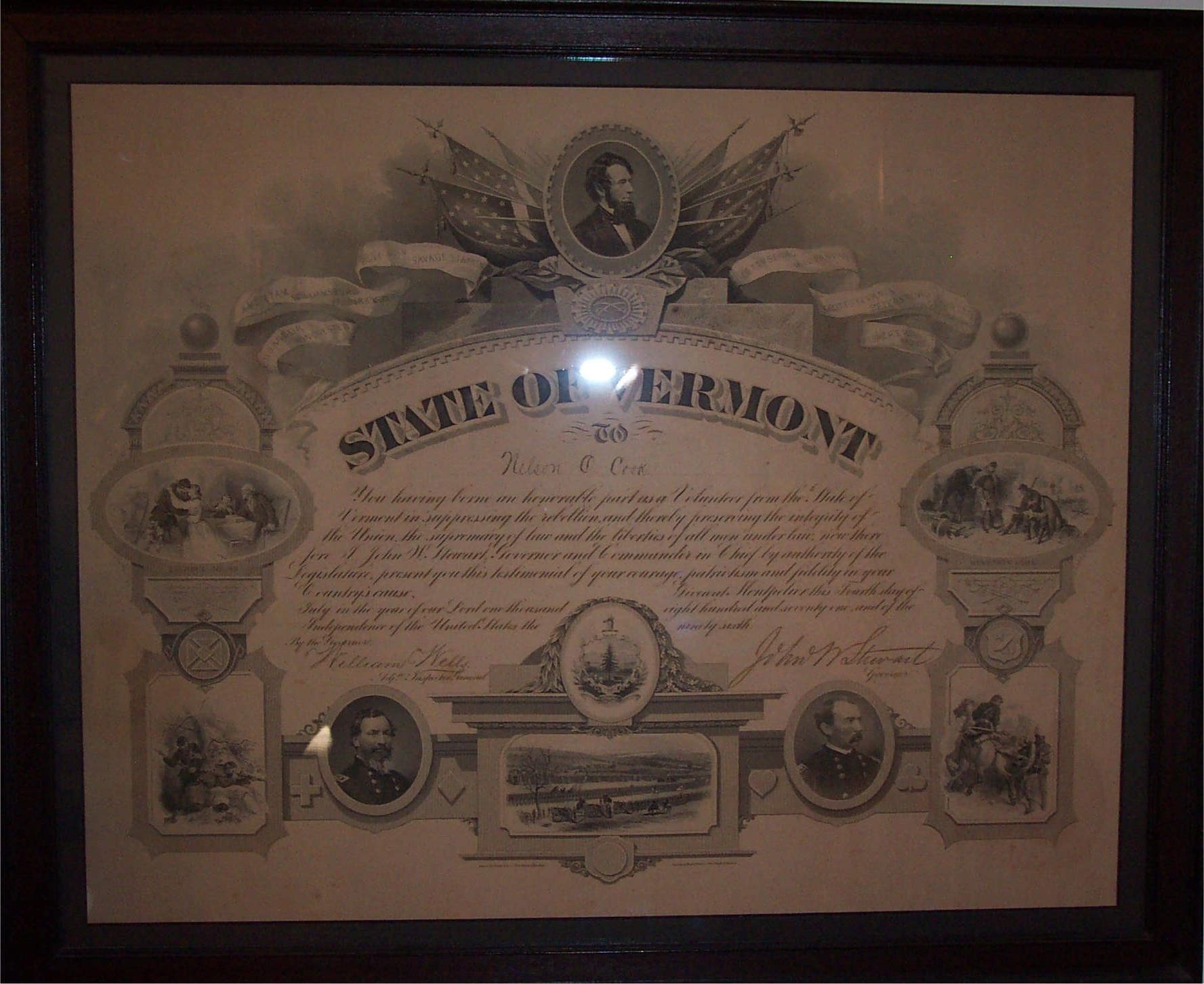 Yours of the 20th ult. was recd in due season -- finding me right side up with care-- and if
these few imperfect lines will report to you and find you as well, as they leave me then
indeed will I be glad. I am happy to hear so good a report of your family--for I began to
fear for the result of your former report of them. I wish you could have seen Mother Cook,
for I have not heard from Her since Jennie left her. Although I am looking for some news
from her by Every steamer. I wrote her sometime ago sending my Photo to her. Surely I thought
She would acknowledge the receipt -- I have one more left which I will send you -- and if you

think your wife would like to take a look at it, and write me in return you Can Sent it to her --
I do not think you would be very jealous if she should write me a le?
Well Surely Eward is rather beating us in enlisting- What Regt ?? is he in now? and do you know
where he is?

And Horace, he too is beating us raising a familiy -- I think he had better enlisted for a few years
and let his Wife rest. I though my family increase was as much as I could stand So I left.

Well I now hope we may all meet - one more in Peace - and live to enjoy it for a few years.

We are doing Guard, Pickets and drilling duties. have been doing some fatigue work all winter
until last ??? ??? stoppd --

I Should like very much to see the Photo's of yourself and family -- if I am not allowed the privilege of
seeing the originals. I Expect it is very difficult work for our Wives to manage in our absence -- but I hope
to meet them ere another winter sets in -- and to stay with them. Our time is about one half expires -- and I
wish to Stay long enough to claim all of the Government bounty, and to become a Veteran Soldier, and then
I shall be satisfied. I am aware to a small degree of what Doctors fees and Bills are -- it take the fortune
of a Prince to have a Good Sick and enjoy it. However I wish not the Sickness nor Doctors Bills to trouble me or
Mine.

Taps have sounded -- and I am detailed for Picket tomorrow So I shall not write much this
time -- news I have none - there was a large fire two days ago in the direction of Parris Island -
report says the rebs are evacuating -- and burning up the old Barracks - forts fortifications &c. generally -
we will know more about it in a few days, when the New York Papers come.