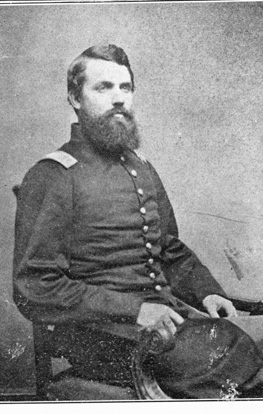 Captain Lewis L. Colburn volunteered from the town of East Montpelier in August 1862, and at the organization of the East Montpelier Company (so called) was unanimously elected captain of Company C. A very suitable recognition for so responsible a position. While it was true there were quite a number among the recruits that were suitable it was concluded that that was no one so well qualified for captain as Lewis L. Coburn. He was of proper age and education, and in physical appearance, military bearing and other important essentials was a model person to take charge of and lead a company of volunteer Vermont soldiers. He was of more than ordinary ability and courage and the peer of any captain of the line of the 13th Regiment. He demonstrated repeatedly the wisdom of his selection as leader. He was careful, cool, deliberate and determined, out-spoken on all questions of discipline order and the regulation of all questions concerning the management and welfare of the company and regiment.

It is not too much to say that Company C was as well and as quickly fitted for the duties required as any in the regiment. Captain Coburn was a good disciplinarian and at all times commanded the respect of his company. His name was properly considered at the time of the organization of the 13th Regiment as a suitable person to be elected Lieutenant-Colonel, and in the humble opinion of the company historian (William Allen Cooper), would have made good, had he been promoted to the position. Captain Coburn was of strong convictions and very sensitive and quickly aroused if any apparent slight or unfair treatment from any source; was as all times on hand in and command of his company. His conduct from first to last and especially at Gettysburg was highly creditable. He was alert and led his boys in the several charges with such prowess as to command admiration and encourage the boys under him. His example was an inspiration to the noble heroes of Company C. The regimental colors were in loyal hands not to be taken so long as one lived to defend and protect. With equal experience could have commanded a regiment as well as any connected with the 13th.

The old boys of the 13th have been deprived of Captain Coburn's fellowship at our regimental reunions and it has been often spoken of with regret. He has for many years resided in Chicago and has been a very busy man. We sincerely believe that he has a kind regard and affectionate remembrance toward all his comrades of Company C and the 13th Regiment. He gallantly did his part in securing victory at Gettysburg, which gave to Stannard's Second Vermont Brigade unstinted praise and imperishable honor. Captain Coburn has become prominent in his profession since the Civil War, but what he and his associates did in the charge against General Pickett's selected thousands was of greater moment and value in saving and perpetuating the union than all the battles from First Bull Run to Antietam.

University of Vermont Class of 1859, member of Delta Psi fraternity

Chicago, Oct 23 - Louis [sic] Larned Coburn died at his home here tonight, aged 75 years. Mr. Coburn was the founder of the Union League Club here and was chosen its first president. He was also instrumental in organizing the Athenaeum and was a member of the Art Institute, Historical society, Loyal Legion and G.A.R.

He was born at Montpelier, Vt., on Nov. 2, 1834, graduated from the University of Vermont in 1850 and later from the Harvard law school. He opened an office for the practice of patent law here in 1861, remaining active until a within few weeks of his death. During the war he served as Captain in the 13th Vermont Regiment.