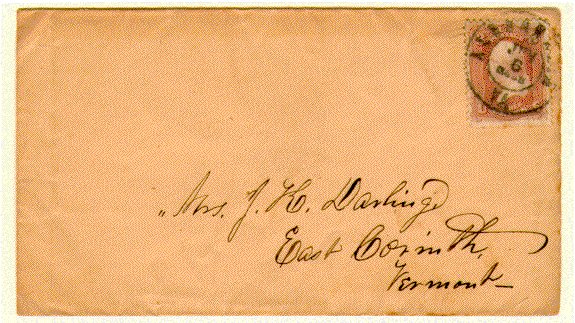 He received his educational training at Corinth Academy and at the hands of a private tutor. Being desirous to see something of the world beyond the boundaries of his native state, in 1853 Mr. Darling went to California, where he was employed in surveying and mining till 1861. Returning to Corinth he purchased a farm, upon which he labored for two years. Feeling that it was his duty to give his services to his country in the civil war, he enlisted, August 16, 1862, as a private in Co. H, 12th Vt. Regt., and was mustered out at Brattleboro, July 14, 1863.

He then for some years pursued a mercantile life and was also the postmaster at East Corinth from 1864 to 1871. At this time he formed a resolution, somewhat late, perhaps, to study law and commenced reading with Hon. Roswell Farnham. Having been admitted to the bar in 1874 he practiced at East Corinth for ten years, when he removed to the town of Chelsea, where he now resides.

Mr. Darling has affiliated with the Republican party; was for several years the chairman of the Orange County Republican committee; was chosen state's attorney in 1882 and is now the deputy clerk of the Orange County courts. He was elected from Chelsea to represent the town in 1890-'94 and while a member of the Legislature served upon the temperance, judiciary and election committees, of which last body he was the chairman. During his latter term of office he was member of the judiciary, ways and means committees and chairman of the committee on military affairs.

He is attached to Ransom Post, No. 74, GAR, a member of the Congregational church at Chelsea and has been for twenty years superintendent and teacher of a Sabbath school.

Joseph K. Darling, 77, of Chelsea died Tuesday after a long illness. He was a Civil War Veteran, serving as corporal in Company H., 12thr Vermont Infantry, a lawyer prominent in affairs of the town, county, and state. He had served in both branches of the legislature.

News was received here last Sunday that Mr. M. V. B. Davis of Chelsea was dead. Davis had many acquaintances here, and in Tunbridge, among old soldiers, he having served 4 years in Co. E., 2d, Vt., Regt., which was enlisted at Tunbridge in 1861, and which received a part of its instruction at that village, where its 2d lieutenant. Orville Bixby, and afterward its Captain, resided at that village.

Mr. Davis established an excellent record as a soldier during his service, participating in nearly every skirmish and battle his regiment was engaged in. He was wounded in the battles of May 3, 1863, and May 4, 1864.
Vermont Phoenix, October 28, 1910