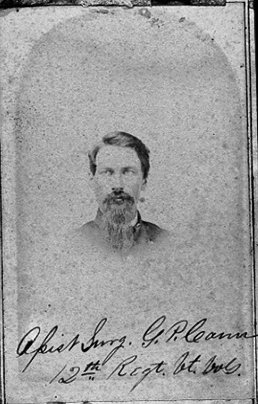 Dr. Granville Priest Conn of Concord, dean of the medical profession in New Hampshire and one of the oldest graduates of the Dartmouth Medical College, died March 24, 1916, at the home of his son, Charles F. Conn, in Wayne, Pa.

Doctor Conn was born in Hillsborough, January 25, 1832, and for two years attended Norwich University, which gave him the honorary degree of master of arts in 1881. He was the last surviving member of the class of '56 at Dartmouth Medical College.

He practiced in Vermont until 1862, when he enlisted with the Twelfth Vermont Volunteers as assistant surgeon. Upon his return from the war he settled in Concord and practiced there for fifty years, retiring in 1914.

As a member of the Concord Board of Health he instituted the first sanitary survey of an entire city ever made in this state, and probably the first house-to-house inspection in the country. He was the pioneer in the establishment of a State Board of Health in New Hampshire, and upon its organization in 1881 was made its president, holding the office until his retirement from active practice. For a long period he was the medical director of the department of New Hampshire G.A.R.

He was a member of the American Medical Association, of the Medico-Legal Society of New York and of the International Association of Railroad Surgeons, and for a long time he was at the head of the surgical staff of the Margaret Pillsbury General Hospital.

Doctor Conn was lecturer on hygiene at Dartmouth. Medical College from 1886 to 1896; professor emeritus since that date. He was a Knight Templar and a member of the Society of Colonial Wars.

He married at East Randolph, Vt, May 25, 1859, Helen M. Sprague, who died in 1914. Their two sons were Frank W. Conn, deceased, and Charles F. Conn, Dartmouth, '87, an engineer and at one time treasurer of the Boston Terminal Company.