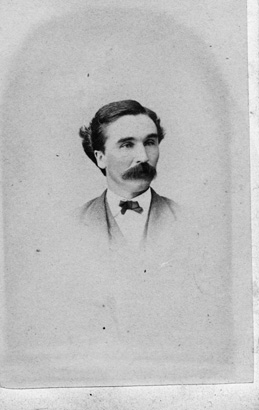 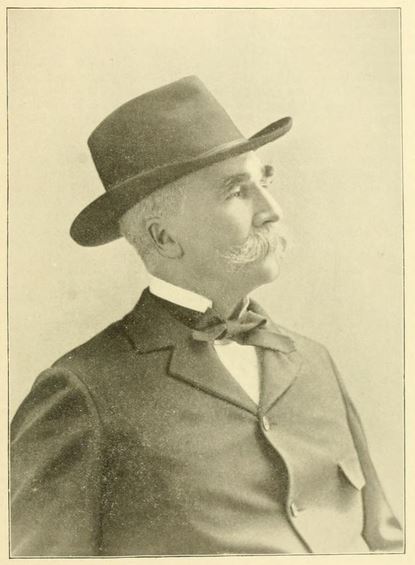 Capt. Henry B. Atherton was born at Cavendish, Vt., Sept. 21, 1835, and is the youngest son of Jonathan and Roxana (Ives) Atherton. Captain Atherton's father was fifth in descent from the emigrant, James Atherton. who came about 1635 from Lancashire in England to Dorchester with his kinsman, Maj. Gen. Humphrey Atherton, who succeeded Sedgwick in the command of the military and naval forces of the Bay colony. Charles G. Atherton, late United States senator from New Hampshire, was also fifth in descent from the same emigrant ancestor, James. Mr. Atherton's mother, Roxana Ives, was the only daughter of Capt. Elihu and Phebe (Hall) Ives and was born in Ludlow, Vt. She was a cousin of the late bishop, Silliman Ives of South Carolina and the late N. K. Hall of Buffalo, United States District judge, a member of President Fillmore's cabinet, and she was also a lineal descendant of the emigrant John Morse of Connecticut, who was the ancestor of George Kennan, the author, of Prof. S. F. B. Morse and of Chancellor Kent. She was educated at a young ladies' school in Middlebury, Vt., in which town her only brother, Isaac, attended college, and before her marriage she taught school. She was a good wife and devoted mother and her many noble qualities of mind and heart endeared her to all who knew her. She lacked but a few weeks of being ninetv-four years old when she died in 1890.

Jonathan Atherton, grandfather of the subject of this sketch, was born in Massachusetts, served in the Revolutionary army, married Nancy Bridge and removing from Harvard, Mass., became one of the first settlers of Cavendish about 1782, and was the first representative elected to the legislature from that town. He was a farmer and also practiced law until his death in 1826. His son, Joseph, was a lieutenant in the regular army and served in the War of 1812. The sou, Jonathan, a man of marked ability and great decision of character, of simple tastes and fond of reading, preferred the free and independent life of the New England farmer of the last generation and continued to reside on the broad acres where he was born until his death in 1875, at the age of eighty-seven.

Captain Atherton obtained his education in the public schools of his native place, at Black River academy, Ludlow, Leland seminary, Townsend, and Dartmouth co1lege where he was graduated with the degree of A. B. in 1859. Among his classmates in college were Dr. Edward Cowles, Dr. Phineas S. Conner, John Davis, B. F. Hayes, Prof. E. R. Ruggles, Asa W. Tenney and Wheelock G. Veazey.

He read law in the office of Joseph Sawyer in Alton, I11., for a short time and subsequently in the office of John F. Deane with whom upon admission to the bar he entered into partnership. He took a year's course at the Albany Law school where he received the degree of LLB. in 1860. Among his associates at the law school were Senator William F. Vilas of Wisconsin, Gen. W. G. Veazey of the Interstate Commerce commission and Senator Redfield Proctor of Vermont.

Before he was fairly settled in the practice of his profession the Rebellion broke out and he offered his services to the governor of the state who requested him to raise a company. He received recruiting papers Aug. 12, 1851, and on the following day began the work of enlistment. In fourteen days his company was full with nearly twenty men to spare. September 3 he was elected captain and on the twenty-first of the same month his company was mustered into the United States service at Brattleboro as Company C, of the Fourth Vermont volunteers and the regiment left the next day for the front.

This regiment formed a part of the famous First Vermont brigade and with General Hancock's brigade was in the division of Gen. "Baldy " Smith. They were stationed across the Potomac at Camp Griffin near Lewinsville, Va., and during the fall, winter and the next spring took part in General McClellan's peninsular campaign. At Lee's mills on Warwick Creek, April 16, 1862, Captain Atherton, while in command of his company attacking the enemy's position, was severely wounded by a minnie bullet in the right groin. He also received a scalp wound from a piece of shell at the same time. Having in consequence become disabled from active duty he resigned on the twelfth of August, 1862.

Oct. 27, 1862, he removed to Nashua to take the editorial charge of the New Hampshire Telegraph, which paper he conducted until April, 1864. He then resumed the practice of his profession which he has continued up to the present time. From 1866 to 1872 he was in partnership with the late William Barrett. For two years he was treasurer of Hillsborough county and from 1872 to 1876 postmaster of Nashua. In 1867 and 1868 and again in 1885 and in 1887 he was a member of the state legislature, serving the last two terms on the judiciary committee and as chairman of the committee on national affairs.

Captain Atherton was a delegate to the Republican National convention at Chicago in 1884. At the beginning of President Harrison's administration he was appointed land commissioner for Samoa under the treaty of Berlin, and through his old comrade. Senator Redfield Proctor, then secretary of war, he was also offered the governorship of Alaska, both of which he declined. In 1890 he was elected member of the board of education for four years, and in 1893 and 1894 he was president of that body. Captain Atherton is a member of Rising Sun lodge, A. F. and A. M., and is also a Scottish rite Mason of the 33d and last degree. He attends the service of the Pilgrim church.

As an attorney Captain Atherton is among the leading members of the New Hampshire bar. He prepares his cases with great care and presents them with tenacious regard for his clients' rights. In argument before a jury he bears himself with dignity and discusses the evidence he has submitted in a clear and forcible light. Captain Atherton, however, is more than an attorney. He is a man of learning in the great field of general knowledge, a thinker and an essayist who develops his subject in terse expression that shows his newspaper training. Besides this he is an earnest and lucid public speaker, both on political and other themes, and has made many Memorial Day addresses that have instructed his comrades and other auditors and won for him general approbation. Captain Atherton is a member of John G. Foster Post, G. A. R., and one of its past commanders.

Linda Welch, Windsor County historian, is reviewing Captain Atherton's papers, and has shared a number documents with us.
Previous Page