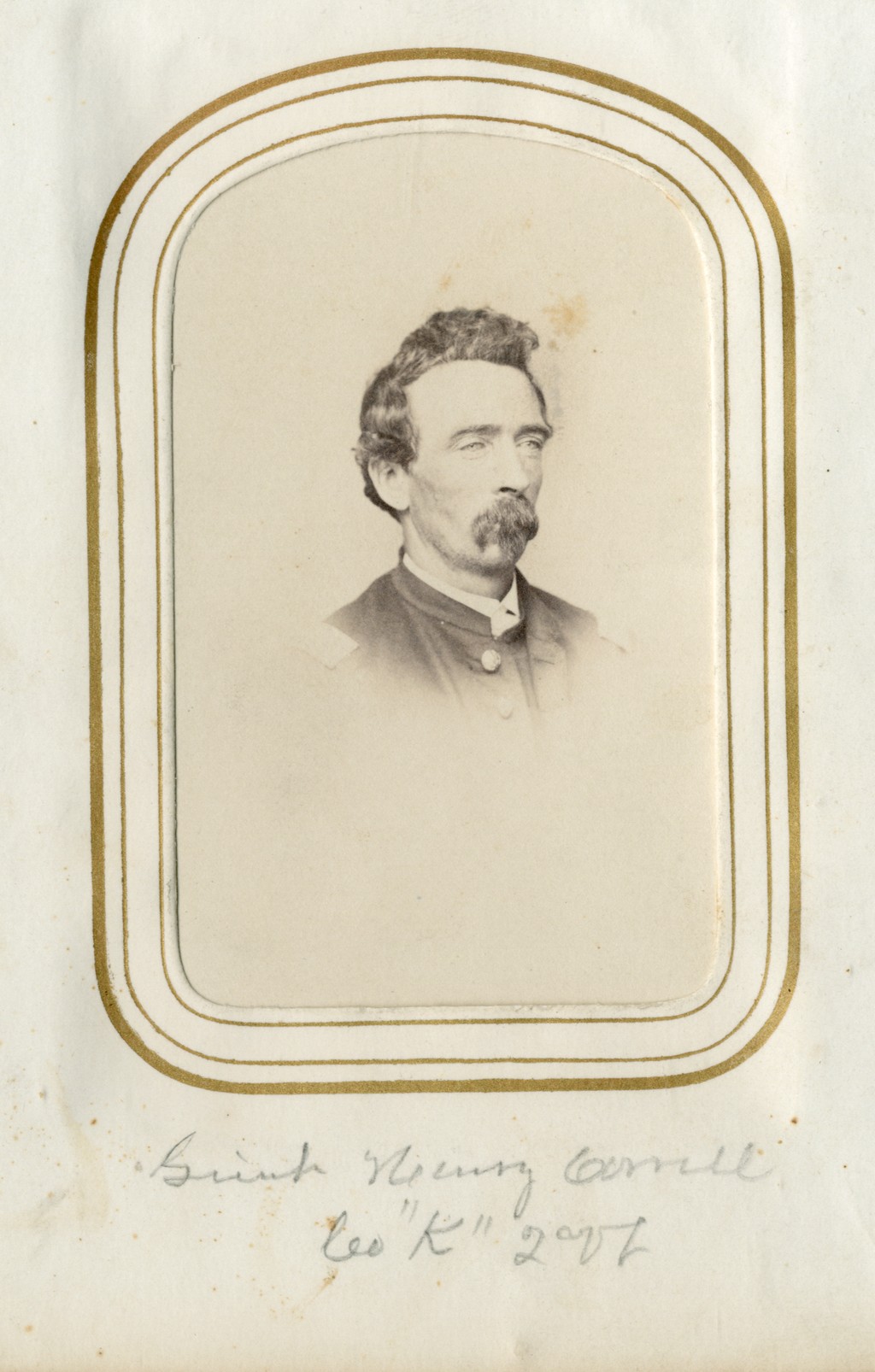 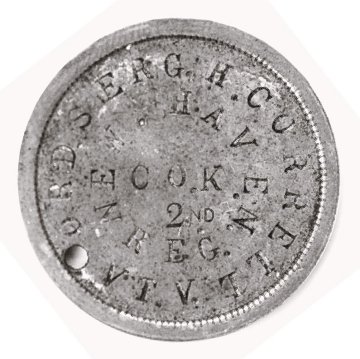 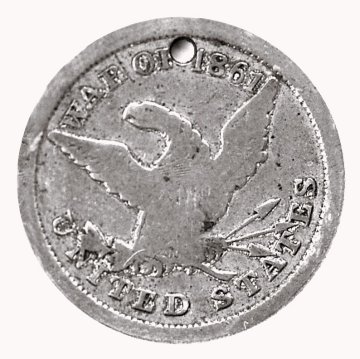 Between 1851 and 1861, Henry worked for Brooks Brothers, in Brooksville (a village in New Haven, see note below) in their axe factory. He enlisted 15 May 1861 as First Sergeant, Company K, 2nd Vermont Volunteer Infantry, and mustered in 20 June 1861 at Vergennes. He was discharged 22 July 1862 to accept a commission as 2nd Lieutenant in the same Company.

Lt. Correll's regiment and the rest of the First Vermont Brigade had faced Lee's army in 1863 as the Union Army chased Lee 10 days following Gettysburg, at the Battle of Funkstown, Maryland (July 9-10, 1863). Henry Correll was wounded in the left heel, hospitalized a few days at the Frederick City Hospital, and furloughed to Vermont for 30 days. He rejoined the regiment in mid-August.

On 6 May 1864, the second day of the battle for the Wilderness, a number of the 2nd Vermont were captured, including Lieut. Correll. As an officer, he was imprisoned at Libby Prison, Richmond, Va., for eight months, and later at Camp Ogelthorpe, Macon, Georgia, and finally, Camp Sorghum, Columbia, S.c. While in prison he developed chills and rheumatism.

He escaped from prison, and took 56 days, through swamps and forests, to reach Union lines. He was discharged 6 January 1865 in Washington, D.C.

After returning to Brooksville, he returned to the axe factory at Brooks Brothers, but was unable to work, due to his debilitated condition until July. He married Mary (?), date unknown. He remained with Brooks Brothers for five years, moving to Johnsonville, NY, about 125 miles away, where he lived from 1870 to 1880. In 1880 he moved to East Douglass, Massachusetts, about 180 miles east, near the Rhode Island/Connecticut border, where he died, age 60, 2 September 1889, of cancer. He was 60 years, 10 months, 27 days old. His wife, Mary, a native of Philadelphia, Pennsylvania, survived him.

Carroll or Correll? At least the 1864, 1865 and 1866 Adjutant General's Reports, and the Revised Roster list Henry's surname as Carroll. So does George G. Benedict in his "Vermont in the Civil War 1861-5," (Free Press Association, Burlington, Vt., 1888), to wit: "Among those captured was Lieutenant Henry Carroll, of Co. K. Lieutenant Carroll remained for six months in the enemy's hands till, on the 1st of November 1864, he escaped from the prison at Columbia, S.C., and made his way to the Union lines at Nashville, Tenn., after a toilsome foot journey of two months' duration."

Discharged soon after his return to Union lines, Lieut. Correll did not join the Reunion Society of Vermont Officers, nor the Military Order of the Loyal Legion of the United States, so his name was not recorded on their rolls. Both A. O. Abbott, in his "Prison Life In The South At Richmond, Macon, Savannah, Charleston, Columbia, Charlotte, Raleigh, Goldsborough And Andersonsonville," (Harper and Brothers, New York, 1865) and Willard Glazier, in his "The Capture, the Prison Pen, and the Escape, giving a complete History of Prison Life in the South Principally at Richmond, Danville, Macon, Savannah, Charleston, Columbia, Belle Isle, Millin, Salisbury, and Andersonville," (Case, Lockwood & Brainard, Hartford, Conn., 1868), list him as 'H. Correll.'

Lt. Correll escaped from Columbia, S.C., with Capt. James M. Gere of the 122nd NY Inf., Capt. Andrew M. Benson of the 1st Dist. of Col. Cav., and Captain Horace H. Walpole of the 122nd NY Inf. Two renditions of the escape list his name as Correll. His service record and pension files in the National Archives are listed under Henry Correll. And finally, the evidence before your eyes above! Therefore, all rosters mentioning Henry Carroll on the website will be changed to Correll. All other references will be annotated with the correct information (or at least a [sic]).

Brooksville is not to be found on very many maps. According to the U.S. Geological Survey, it was located just north of the New Haven River on U.S. Route 7, in the southern part of the town of New Haven, just above the border with Middlebury.