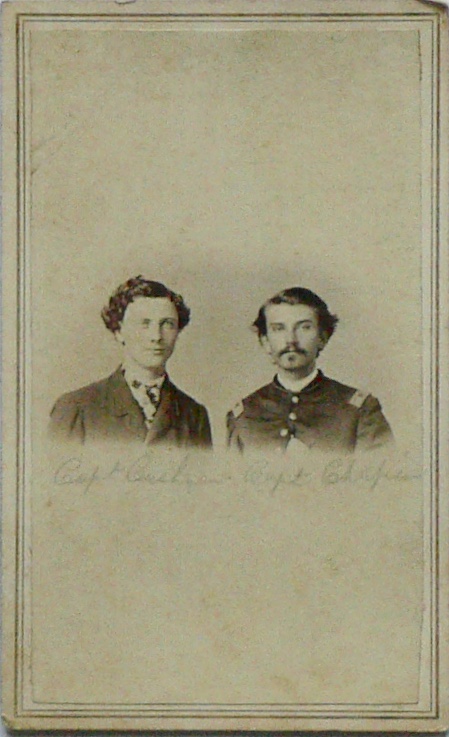 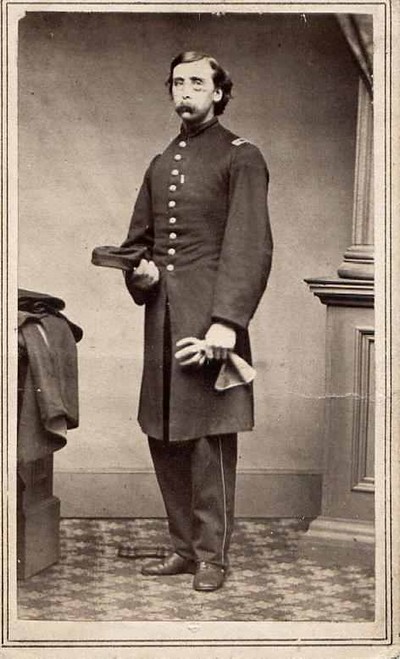 Oliver Tucker Cushman, son of Clark and Abigail (Tucker) Cushman was born at Hartland, Vermont, 5, May 1841. His father was a farmer. He fitted for college at Meriden, New Hampshire, Kimball Union Academy. He entered college in 1859, he left in the fall term 186o. He enlisted in October 1861 and became a sergeant in a Vermont cavalry company, which was being organized at Royalton, Vermont. He was comm1ssioned 2d Lieutenant April 10, 1862; 1st Lieutenant 1, February 1863; Captain 17th March 1863; he was wounded and taken prisoner on the 3d of July 1863; was paroled and went to his home in Vermont; his wound was a very severe and dangerous one in the side of his face, and for several weeks he was at Hanover under the care of Dr. Crosby; this was at the time our class graduated. He never fully recovered from the effects of this terrible wound, but, contrary to the advice of friends and physicians he rejoined his regiment in October 1863. The time of his company having expired he re-enlisted, them and they were granted a furlough of 9o days, which he spent at his home in Vermont. In March 1864 he returned to his command. During the battles of the Wilderness he commanded a battalion and was brilliantly daring during that bloody campaign. He was killed at "Hawes' Shop" near Richmond Virginia, June 3d 1864. Had he not been killed then, he would soon have received the commission of Major. General Wm. Wells who went out in command of the Vermont Cavalry says of him; "He was not only one of our bravest, but also one of our best men, and had he lived would have obtained high rank in the army. His company was devotedly attached to him, and his superiors in command, as well as all associates, bear witness to his high character as a soldier and a man." He was not married. [His mother, Mrs. A. T. Cushman, resides at Mattoon, 11l. F.]


Mr. & Mrs. O. Holt
I have this day sent to
my father a package with some things
of mine & what things of your lamented
sons I can find here - I think it is all
with the exception of a little pistol which
he was used to carry in his pocket. This I
thought was here till I came to get his things
together to pack up - I then found that one
of Henry's old cronies had taken it saying
that he would clean it up and send it [to]
you not knowing I was intending to send you
all his things. He was at the front and
I must send the parcel yesterday or not
at all, so I could not wait to procure
it - When I do, however I will send it [to] you
The intrinsic value of the toy is a trifle, a mere
nothing, but you I know will cherish any

thing which speaks to you of your lost boy.
A brave soldier a cheerful comrade - a faithful
friend he has left many sorrowful hearts behind among
his companions in arms - You have the consolation that
there was not a coward impulse in his breast
and that he as well as that noble little hero George
Rumrill was every inch a brave.
All honor to all such.

Those things that you sent Henry by Express
I have disposed of but the boys are entire-
ly out of the "sinews of war." When we
are paid so I can get the pay for them

I will send the money.
Believe me as ever a friend sympa-
thizing in your great affliction -
Oliver T. Cushman

Casualties in the Cavalry from May 5th to June 3d, 1864, inclusive.