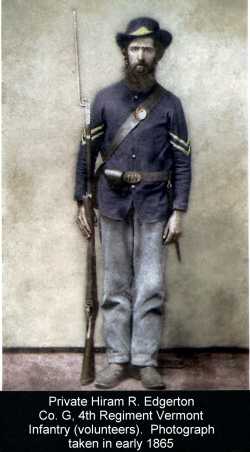 The original photograph was recently found by my sister in New Bern, NC just last August. I've worked with a professional photo restorer to lightly colorize the photograph copy, consistent with historical accounts of a period uniform. His complexion is consistent with post-war medical pension records, also researched. The rifle appears to be a Springfield, Model 1861, .58 cal (not the .54 cal Sharpes used later by the USSS in 1864). Hiram's service record indicates he was a Private. I'm perplexed why the two stripes on his shoulders in this photograph (?)

Volunteered 16 Dec 63 in Danby, Vt., mustered in 26 Dec 63 in Brattleboro, Vt., injured (possibly at Spotsylvania Court House on 12 May 64), contracted dysentery in July 64 on the Petersburg Front, injured during a night march in mid August 64 near Deep Bottom, returned to duty in January 65, transferred with the USSS to Co. G, 4th Reg. Vt. Infantry on 25 Feb 65, and mustered out at Hall's (Bald) Hill, Virgina on 13 Jul 65.