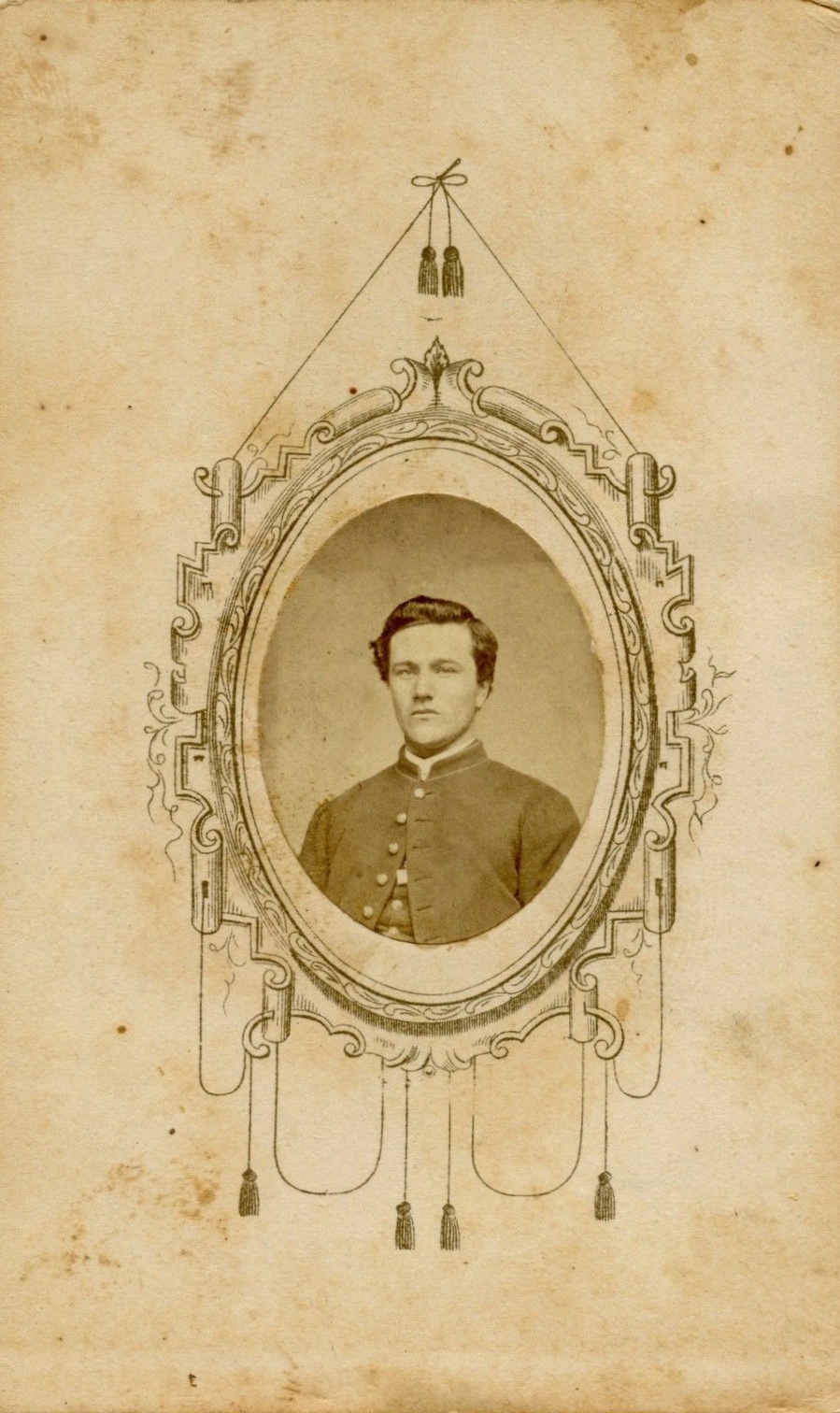 by Joseph Stahl
SPECIAL TO THE WASHINGTON TIMES 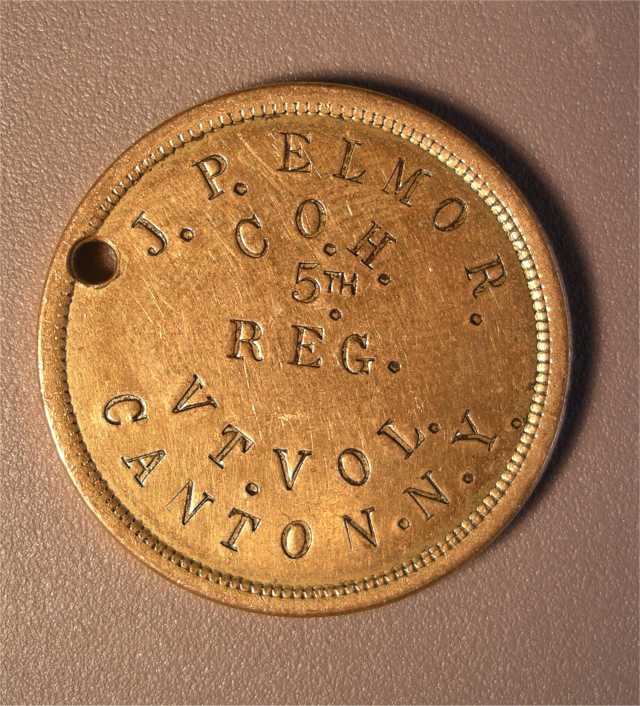 Of the 1,618 men who served in the 5th Vermont during the Civil War, it is reported that more than 450 were wounded during their service.
One of these was Pvt. James P. Elmer.
Elmer was mustered into Company H on Sept. 6, 1861, at Saint Albans, enlisting for the usual three years. He is described in the Regimental Descriptive Book (available from the National Archives) as a farmer born in Condrum, Vt., age 22, 5 feet 8 inches tall, with blue eyes, dark hair and a dark complexion.
Military life didn't seem to agree with Elmer. He immediately became sick and was hospitalized until January 1862, when he rejoined his company, remaining with the unit until June 29. It is assumed he bought his ID tag (shown in the photo) during this period because its style was being purchased by soldiers as early as February 1862.
The tag is brass with an eagle and the inscription "War of 1861" and "United States" on one side. The side shown is stamped with his personal information: "J. P. Elmor. Co. H. 5th Reg. Vt. Vol. Canton. NY" His name is misspelled, and he lists his hometown in New York rather than in Vermont. 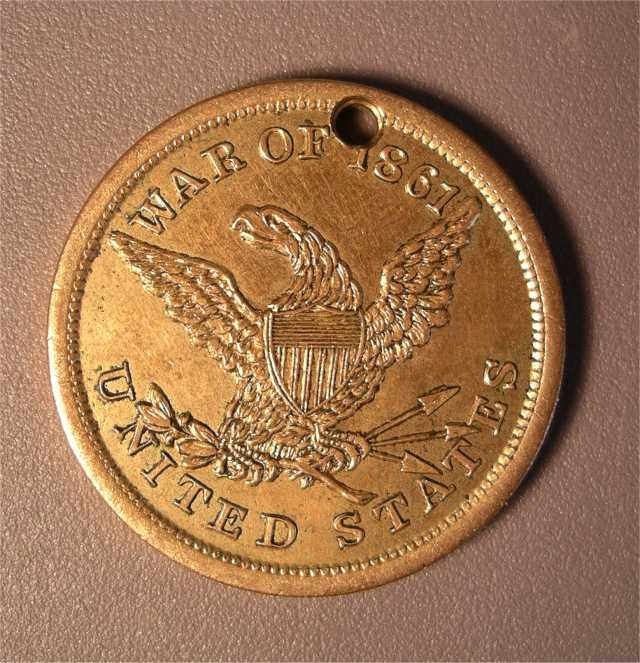 He evidently crossed the border from Vermont to New York to enlist, which he might have done for any one of a number of reasons. He could have known people in the 5th, they could have been the nearest unit forming, there could have been a higher bounty - or, perhaps, he didn't want it known.
One source in researching Elmer's history is the U.S. Army Military History Institute. It has a large collection of identified images of Civil War soldiers, and an inquiry of the curator, indeed, disclosed an image of Pvt. Elmer. The photograph here shows Elmer as a typical soldier of the period.
It was taken after March 1863 because he is wearing his Sixth Corps badge, which was not required until Gen. Joseph Hooker took command of the Army of the Potomac and ordered the badges worn so that commanders could tell which corps and division a soldier was assigned to by the shape and color. The Sixth Corps wore the Greek cross.
A year before that picture was taken, on June 29, 1862, Elmer had been wounded and captured at the Battle of Savage Station in Virginia. The reports of that battle are contained in the War of the Rebellion Official Records of the Union and Confederate Armies, Series I, Vol. 11, Part II for the Peninsular Campaign. Brig. Gen. W. Brooks, who commanded the brigade, reported:
"After passing Savage Station en route for the White Oak the division was ordered to return to that point, on account of an attack being made by the enemy. In this manner the brigade entered the wood that bound the plain to the left and south of the station."
In describing the actions of the 5th Vermont, his report states:
"The Fifth Vermont, Lieutenant-Colonel Grant, debouched from the woods into an open field, where they found a large regiment of the enemy posted, which they routed in gallant style. After the engagement the brigade retired across the White Oak Swamp."
In Lt. Col. Lewis Grant's report, he said his unit "opened fire upon an infantry force in front and beyond the gorge, [in] which fire continued almost without cessation until that of the enemy had entirely ceased and we were ordered from the field. ... The men fought nobly and bravely, cheered on and encouraged by their officers. Some used their entire number of 60 rounds of cartridges. Muskets became heated and unserviceable and were exchanged for those of fallen comrades."
He concludes his report by stating: "Our loss was heavy. The list of casualties already furnished shows 31 killed, 143 wounded, and 31 missing."
As the unit withdrew, surgeon Russell was detailed to remain behind with the wounded, one of whom was Pvt. Elmer. Elmer's records describe a gunshot in the right hip (he stated in his submission for a pension that he was kneeling to shoot when hit). After his capture, he was sent to Richmond, confined there on July 13 and paroled on Aug. 3 at City Point.
The next entry in Elmer's file shows that he was at Hammond General Hospital at Point Lookout, Md., on Sept. 15, serving as a nurse. In November or December, his status changed to "Wardmaster," and he remained "absent at General Hospital" on the company muster roll until July 6, 1864, when he was transferred to the Invalid Corps.
He was assigned to Company D, 16th Regiment of the Veteran Reserve Corps. On Aug. 16, he was detached for service at Asburn, NY, and on Sept. 16, 1864, Pvt. Elmer was mustered out after serving his three years of service.
Elmer married in 1869. He and his wife, Stella, had three children: James (born in 1871), Stella (born in 1872), and Raymond (born in 1879) - all living in 1898 when Elmer filed for his pension. Those records show he was employed as a stonecutter after the war and received a pension for his wound until he died on Feb. 15, 1913, at Brattleboro, Vt. His wife survived him until July 5, 1926.
There remains, however, a mystery about his tag. If he bought it before his capture, did some Confederate take it and keep it as a souvenir? Or was he allowed to keep it? Perhaps he didn't buy it until after he was exchanged.
It would be nice to think that this little piece of metal was being carried that long-ago day in June 1862 when Pvt. Elmer's shooting war ended.
* Joseph Stahl lives in Fairfax, Va.
The above article was originally published in 'Arts & Culture,' The Washington Times, Section B, Page 3, September 13, 2003
Copyright © 2003/2005 News World Communications, Inc. Reprinted with permission of The Washington Times. This reprint does not constitute or imply any endorsement or sponsorship of any product, service, company or organization. Visit our web site at http://www.washingtontimes.com.

News has been received in the city of the death of James P. Elmer, of Brattleboro, which occurred at his home there Sunday afternoon about 5 o'clock. Mr. Elmer was the father of Mrs. George S. Wright, of High st., who was called to Brattleboro by his illness. Mr. Wright is also at Brattleboro.