Daniel D. Fellows died at his home on Pearl street last Sunday of general debility. He has been subject to chronic troubles for several years but managed to keep about until last week, when he was forced to take to the bed. Mr. Fellows was born in Orange and was 54 years of age. The funeral will take place from the house to-day at 1 o'clock. Rev. A. H. Webb will be in attendance. The service will be under the charge of Brooks Post, G.A.R., of which deceased was a member. Mr. Fellows was an old soldier, having enlisted in Company D, 11th Vermont Volunteers, at Johnson, July 15, 1862, under Capt. U. A. Woodbury. He was engaged at the battles of Spottsylvania, Cold Harbor, Petersburg, Fort Stevens, Charlestown, Gilbert Ford, Cedar Creek, and a number of skirmishes. He was promoted corporal in '63. In '64 he was wounded in the right leg and at the close of the war received an honorable discharge. He leaves a widow and two children, a son, and daughter. The son, P. E Fellows, is married and has lived at his father's house. Mrs. B. A. S. Lewis, the daughter, lives at Barre. Mr. Fellows has resided in this city a good many years and was engaged principally in the contracting business. The interment will be made in Green Mount cemetery.

Webmaster's note: Daniel Fellows' burial is registered in Lot 214 at Green Mount, however, there is no marker on that plot. His death is recorded both in Montpelier, and in Morrisville. Based on the headstone in Pleasant View Cemetery, Morrisville, above, he was either reinterred there or is actually in Green Mount in an unmarked grave.

The preponderance of evidence leans towards burial in Morrisville. Although a native of Orange, his parents were living in Lamoille County by at leat 1860; he was credited to Johnson when he enlisted. He married Susan Philips, a native of Cambridge, in 1865 in Johnson. Daniel and Susan were living in Hyde Park in 1870 and Morristown in 1880; he was living in Morristown, running a saw-mill and cider-mill on Town Road 75 at least in 1883-1884 (Child's Gazetteer). He was enumerated in the 1890 Special Schedule of Veterans in Montpelier, and listed in that city's business directory in 1892. Susan is buried in Morrisville, and his son, Perley Fellows, died in Morrisville while visiting from Connecticut.

The photo below was taken of the area which includes Lot 214 at Green Mount Cemetery in Montpelier, VT. No grave marker was found. 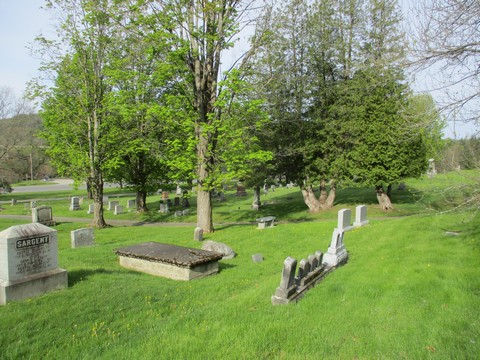