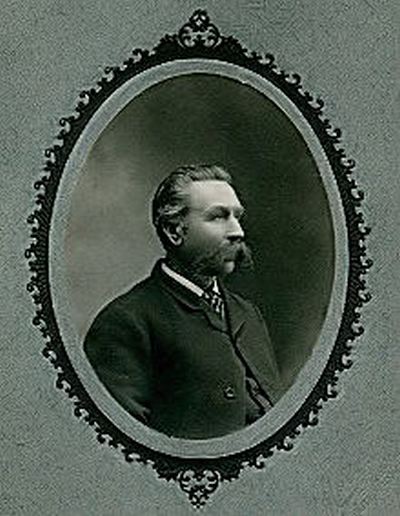 James Monroe Fiske, aged 76 years, a veteran of the Civil war and a prominent resident of the town of Rutland for nearly half a century, was killed yesterday afternoon shortly after 2 o'clock when he fell from the top of a load of hay in the rear of his farm on North Main street. He struck on the side of his head.

Mr. Fiske, in company with his brother, John E. Fiske of Pittsfield, was working in the hayfield. He was on top of the load, while his brother was pitching the hay. The horse started suddenly and Mr. Fiske lost his balance and fell to the ground. His brother and other help immediately went for aid and Dr. O.J. Gilchrist of this city arrived at the farm within a short time, but he was too late to be of any assistance. It is believed that death was practically instantaneous.

Mr. Fiske was born in Randolph, July 24, 1843, and resided there during his early life, coming to Rutland to live over 50 years ago. He had since resided here. He was a member of Roberts post, No. 14, G.A.R., having served in the Civil war as a member of the 14th Vermont regiment, and a member of the Baptist church and Center lodge, No. 34, F. and A.M. Mr. Fiske had been prominent in affairs of his native town, having held several town offices. He is survived by his wife, Mrs. Marcia Hawley Fiske of the town of Rutland, four sisters, Mrs. Amos Baird and Mrs. Anna Hough of Rutland, Mrs. Emma Brown of Brimson, Mo., and Mrs. Truman Townshend of Brandon; also by three brothers, John E. of Pittsfield and Charles and George Fiske of Watertown, Mass. The body was removed to the Stearns undertaking parlors.

The funeral will be held Saturday afternoon at the Baptist church at 2:30 o'clock.

The funeral services of James M. Fisk, the town of Rutland farmer who was killed Wednesday afternoon by falling from the top of a load of hay in the rear of his home on North Main street, were held Saturday afternoon at 2:30 o'clock at the Baptist church, with Rev. D.A. Edwards of Newport officiating. A delegation of Roberts post, No. 14, G.A.R., of which Mr. Fisk was a member, attended the services and directed the services at the church. The bearers were Dr. O.J. Gilchrist, F.C. Ives, W.R. Kinsman, C.G. Johnson, H.O. Carpenter and Fred Bishop. Burial was in Evergreen cemetery. Rev. Edwards officiated at the committal services. A delegation of the Center Lodge of Masons, of which Mr. Fisk was a member, carried out the Masonic ritual service at the cemetery.

The family received a large number of floral tributes, which included set pieces from Mr. Ives Sunday school class at the Baptist church, the auxiliary to the Sons of Veterans, Center Lodge of Masons, "Neighbors", the trustees of the permanent fund of the Baptist church, the Sons of Veterans, and Miss Baird's Sunday school class, besides numerous others from relatives and friends.

The services were attended by a large number of people from all parts of Rutland county.