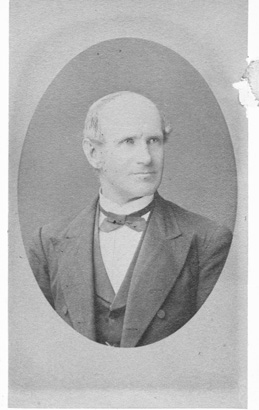 Durell Willams Dayton was born in Poughkeepsie, N. Y., October 17, 1824, and died in peace at his home in Rensselaer, N. Y., June 22, 1909. At the age of sixteen years he made a complete surrender of himself to God, united with the Methodist Episcopal Church and at once entered into its spiritual activities with youthful vigor and consecrated devotion.

Being endowed with a clear and charming voice, the skill to build sentences of beauty and merit and weave them into sermons of more than average power and attractiveness, he seldom preached to small congregations. As a pastor he was dearly loved by reason of his optimistic and congenial nature, ever evidencing itself as he went from house to house helping, cheering and comforting those to whom he ministered. Hundreds of souls were converted and added to the church under his ministry. He did not overlook the material interests of the church, as many churches and parsonages were improved and beautified, and the commodious churches in Burlington, Vt., and Amsterdam, N.Y., were built under his efficient leadership.

As a citizen he had a high regard for civic virtue and took an intense interest in the promotion of social and material progress of the community. Men in official positions, men in business and people of high social rank held him in highest esteem and looked upon his as a wise counselor and a loyal friend. Among his brethren in the Conference he was universally loved.

He retired from the active ranks in 1902, and took up his residence in Rensselaer, where, together with his wife and daughter, he enjoyed his home and the little rest he had so well earned. But while living here he did not spend his days in idleness, as his services were in constant demand by churches of all Protestant denomination in this section, to preach and lecture, and by civic and other organizations to deliver addresses, and it was an exception when he did not preach at least once on Sunday.

The funeral service were held at the home in charge of the writer, Doctors T. A. Griffin, Henry Graham, J. H. Coleman, E. H. Brown and others participating. Interment was in the family plot at Rutland, Vt.

The First Methodist Church of Burlington is a historic church located at 21 Buell Street at S. Winooski Avenue in Burlington, Vermont. It was built in 1869 and was designed by Alexander R. Esty in the Romanesque Revival style. The church was added to the National Register of Historic Places in 1978. (Wikipedia.org)

Rev. Dayton was a life member of the American Bible Society, and at the time of his passing, was a Life Director of the organization.