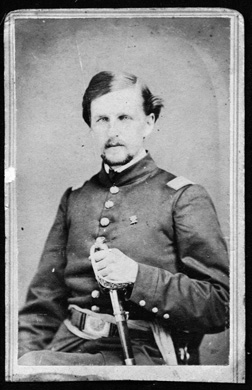 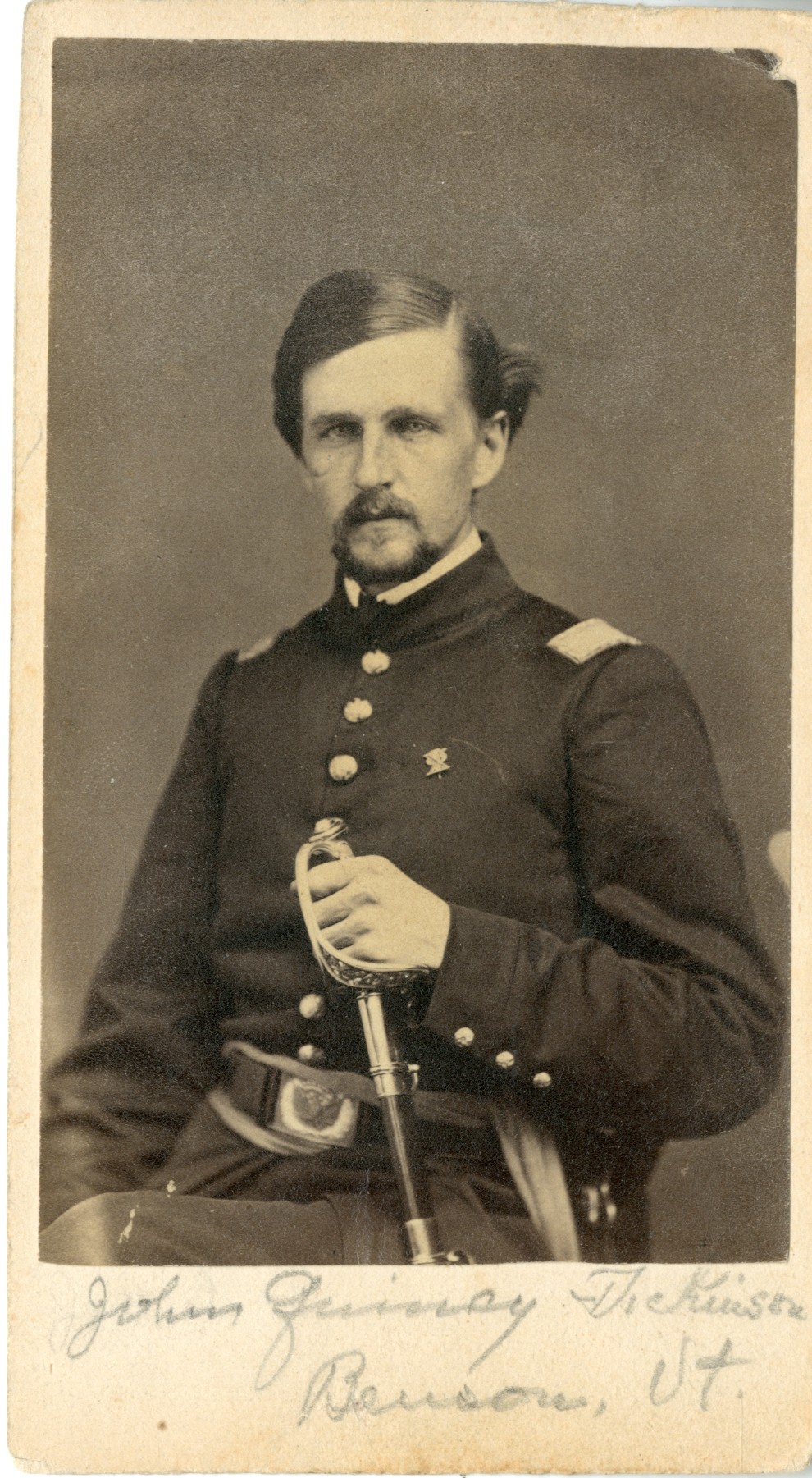 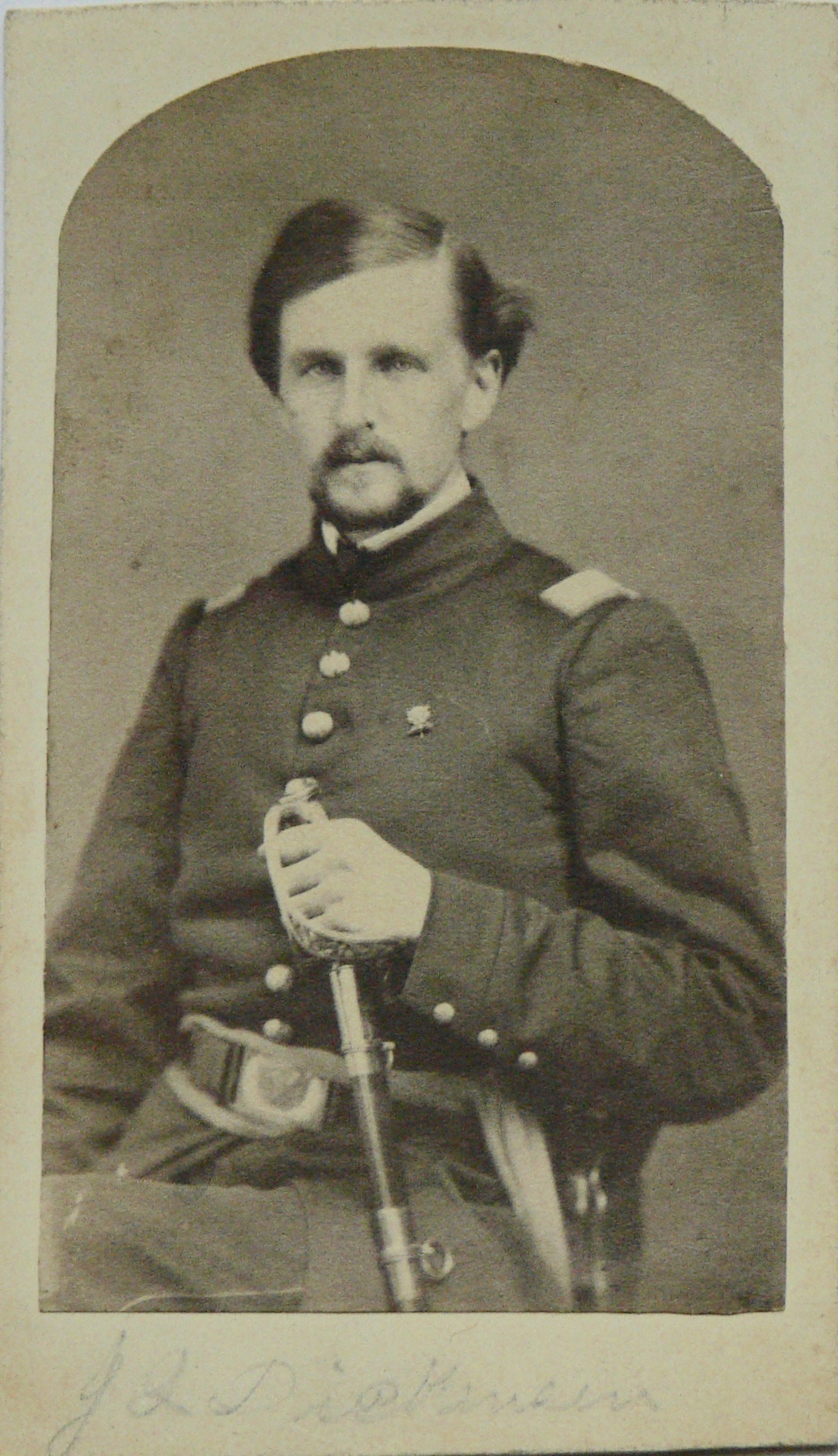 In the Old Cemetery in Benson, Vt. is a large monument which reads: 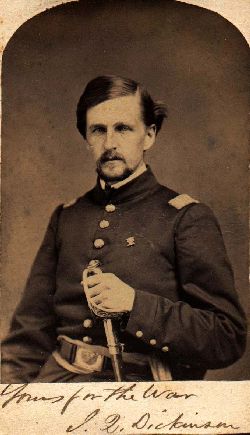 John Quincy Dickinson, son of Isaac and Cornelia (Coleman), Dickinson, was born at Benson Nov. 19, 1837, and was a paternal grandson of Capt. Joel Dickinson. Having pursued the usual preparatory studies in the academies at Poultney and Castleton, he entered the College at Middlebury, and was there graduated in the class of 1860. After his graduation, he was reporter and correspondent, at Montpelier, for the Rutland Herald during the sessions of the State Legislature in 1860 and ‘61; and in the winter of 1861-2 he was active in enlisting the company known as the Middlebury company for the 7th Regiment of Vermont Volunteers, and was appointed 2nd Lieutenant of that company, which was called Company C, in that regiment.

This regiment left the State on March 10th, 1862, having been in camp at Rutland for about 6 weeks previous to that time, and it was sent to the department of the Gulf and in the vicinity of New Orleans. He was present at the bombardment of Forts Jackson and St. Philip, below New Orleans, by the combined fleet under Farragut and Porter in April 1862, and, in a letter published in the Rutland Herald, shortly afterwards, he gave an interesting and graphic account of that fierce and protracted combat. He served in that regiment during the remainder of the war of the Rebellion,-being appointed 1st Lieut. of his company on 9th Oct, 1862; Quartermaster of the regiment on 13th Sept. 1864, and Captain, of Company F, in the same regiment on 22nd Aug., 1865. The two last offices he resigned on 10th Oct. 1865. The regiment to which he belonged participated in the expedition up the river above New Orleans in the direction of Vicksburg, and also in the battle of Baton Rouge, in the summer of 1862, but was afterwards stationed at Pensacola, and in that vicinity, during the larger part of the time until the spring of 1865, though its re-enlisted men received the usual furlough as veterans during August and September of 1864. The regiment was engaged with the troops sent on the expedition against Mobile in March 1865, and shortly afterwards was sent to Clarksville, Texas, and subsequently to Brownsville in the same State, where it was stationed when he resigned his commission in the army. At the time of his resignation, the war had for six months, been substantially closed. He returned to Vermont during his furlough in August and September 1864, and again in the summer and autumn of 1866, and at the time of his death, was expecting to make another visit to his native State in the course of the then approaching summer.

Immediately after leaving the army he engaged in the lumber trade in the vicinity of Pensacola, in connection with Col. Peck of his regiment and another partner, but this enterprise was not successful, and was abandoned after it had been carried on for two or three years.

When the State government of Florida became newly organized under a reconstructed constitution, after the overthrow of the Rebellion, he was appointed Assistant Secretary of the Senate of that State, and he afterwards removed to Marianna, the shire-town of Jackson Co. and was appointed the County Clerk of that County, and he also became a colonel in the State militia. Having pursued legal studies, he was admitted to the bar as an attorney at law; and he was recognized as one of the most prominent, active, and trusted of the leaders of the Republican party of Florida. His future seemed full of hope and promise.

As he was returning at a late hour in the evening of Monday 3d April 1871, from his office to his house in the village of Marianna he was assassinated in the most cowardly manner, being shot down in the street when very near his house,-his left breast and side being pierced by a ball, and his death being apparently the instantaneous result. The circumstances attending the transaction tend, with a ? which seems irresistible, to the conclusion that the motive for his assassination was exclusively political, and that the deed was prompted by an implacable and fiendish spirit of revenge for his fidelity to his convictions of duty and to the principles which had been implanted in him by his New England ?ture and education. He died unmarried. His assassins remain as yet unknown, and the guilt of blood unavenged rests upon the community in which he dwelt and died. He was buried at Marianna on the day succeeding his death, but his body was two days afterwards disinterred, and, under the escort of General John Varnum, the Adjutant General of Florida, was removed to Benson, and interred here, in the burial place of his kindred, on Wednesday 19th April 1871, in the presence of the largest funeral procession ever gathered in the town,-the attendance from the other towns in the County and vicinity being very large, and including the Governor of the State, the Rev. Mr. Smart of Albany, NY, and many who had been fellow soldiers with him in the service. A funeral discourse was delivered on the occasion by the Rev. Mr. Holmes, from Ps. xxxvii., 12-15, followed by an address by the Rev. Mr. Smart.

Though the hopes of friends have been so sadly taken away, yet to them remains the pleasant memory of his manly nature and character, and the consolation that the ruling principles of his conduct were noble and upright, and that, in the stern trials to which his duty called him, he was always sincere, faithful, and true. The development of a completed and finished manhood rests not on the length of days. "Honourable age is not that which standeth in length of time, nor that is measured by number of years. But wisdom is the gray hair of men, and an unspotted life is old age." (Wisdom of Solomon, iv., 8,9)