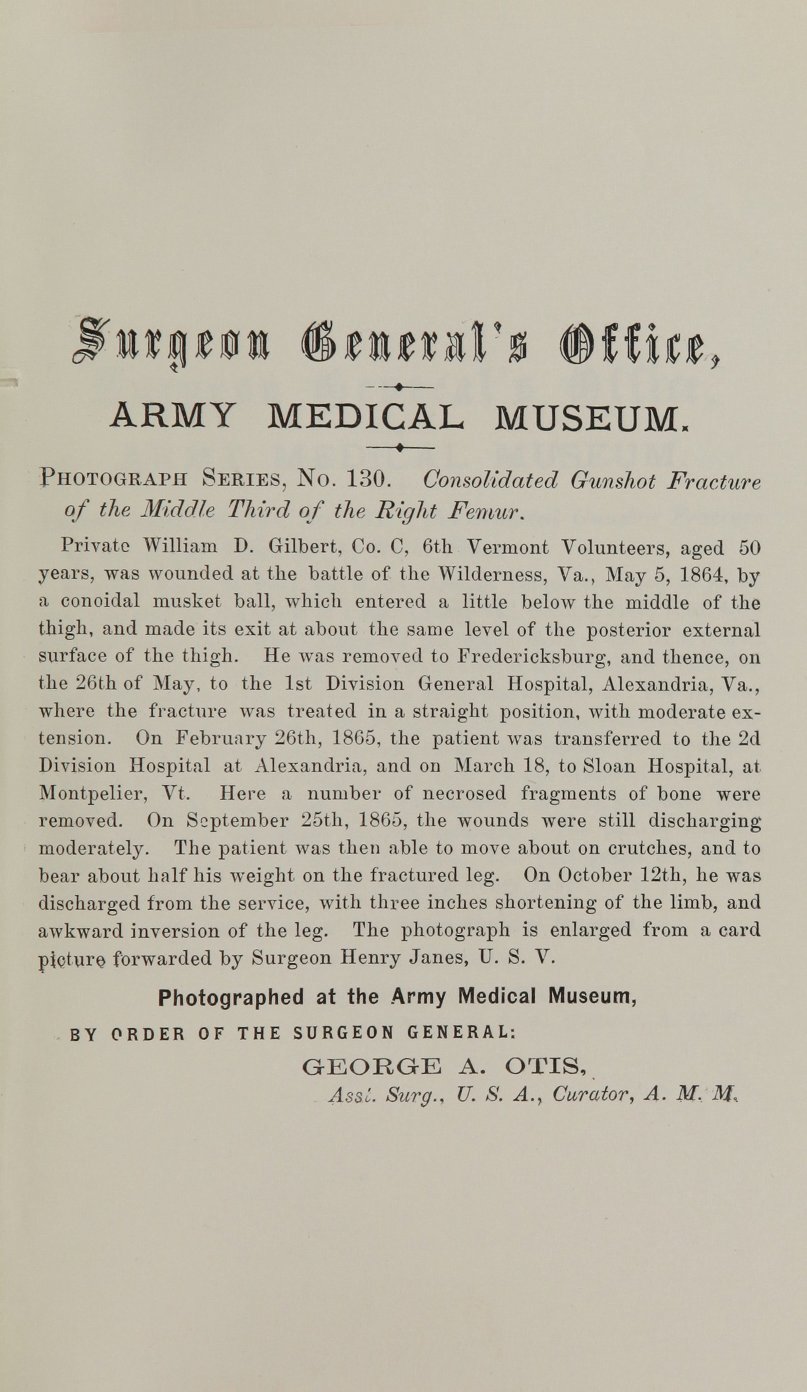 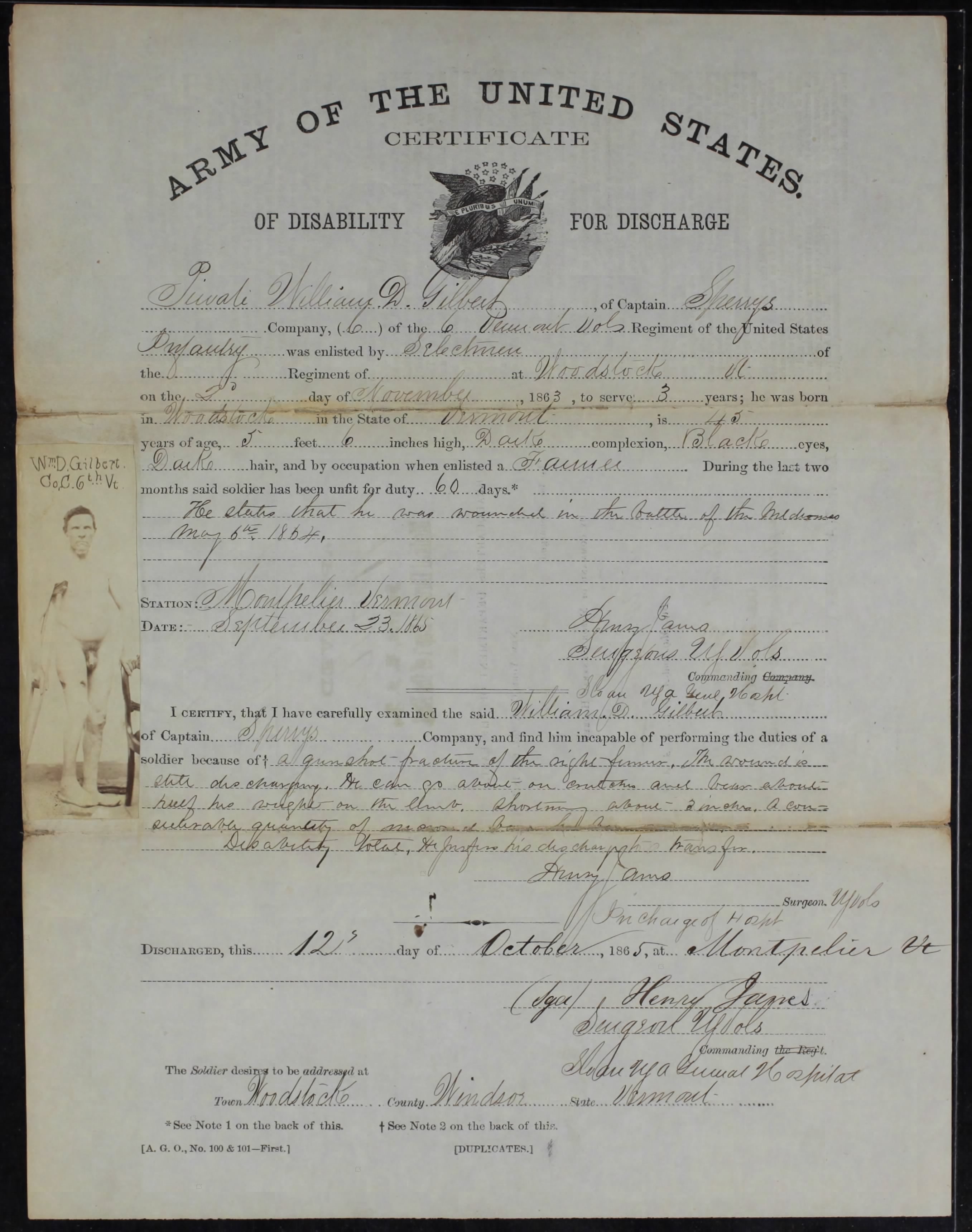 CASE 382.—Private W. D. Gilbert, Co. C, 6th Vermont, aged 50 years, was wounded in the right thigh at the Wilderness, May 5, 1864. Three weeks afterwards he arrived at Alexandria and entered the Mansion House Hospital, whence Surgeon C. Page, U. S. A., reported the injury as a "shot fracture of the middle third of the femur." Subsequently the patient was transferred to Sickels Hospital, and lastly to Sloan, Montpelier. Surgeon H. Janes, U.S.V., in charge of the latter hospital, contributed the following history: "The patient, a man of strong constitution, was wounded by a minié ball, which passed through the thigh at the junction of the middle and lower thirds, comminuting the femur for several inches. The day after the injury he was sent by ambulance to Fredericksburg, no retentive apparatus having been applied, and two weeks later he was moved by cars and boat to Alexandria, the limb being kept in a fracture-box during the trip. At Alexandria, it was put upon an anterior splint and extension was made by brick and pulley. In June several pieces of bone were removed. Suppuration was profuse, and about August 1st his appetite failed and he became so much debilitated that his life was despaired of. After this he gradually but slowly improved, though not without occasional relapses. On January 1, 1865, the splint was removed and the patient allowed to sit at the bedside, and no retentive apparatus was used for more than two or three days after that time. About the last of January he could walk about the ward on crutches, though unable to bear any weight upon the limb. On March 17th the patient was transferred to this hospital, during which journey the limb became considerably inflamed, resulting in his confinement to bed for three days. On May 29th the limb, having again become inflamed and discharging very offensive pus, was freely opened for about four inches, and several large pieces of necrosed bone, one of which measured one by three inches, were removed. The cavity in the callus, which contained these fragments, was found to be large and seemed to extend quite or nearly to the cancellated structure of the condyles. After the operation suppuration became healthy and the wound mended rapidly for four weeks, when the improvement became checked. On September 7th, the limb was again laid open freely and a small piece of bone was removed, after which there was no further interruption in the progress of the patient up to October 12, 1865, when he was discharged from service. At this time the wound still suppurated to the amount of two ounces per day, and a considerable cavity existed between the ends of the bone, but no necrosis could be detected by the probe. The limb was shortened three inches, and there was ligamentous anchylosis of the knee joint, permitting the patient to move it about ten degrees. He was in general good health, able to bear half his weight on the injured leg for a short time, and seemed to have a fair prospect of obtaining a useful limb. There had been no hćmorrhage, gangrene, or diarrhśa since the injury, and his appetite had been good nearly all the time, having taken nutritious food freely and stimulants moderately." Examiner W. McCollom, of Woodstock, Vermont, November 14, 1866, certified to the injury, and stated: "The bone has united with three inches shortening. Exfoliations are thrown off occasionally, and the wound in the soft tissues has not entirely healed. He is totally disabled from performing manual labor at present." Examiner O. W. Sherwin stated, September 4, 1873: "There is considerable loss of tissue, and the knee is permanently flexed so as to keep the heel two inches from the floor," and, in September, 1877, he reported the following: "During the present year a large abscess formed at the seat of the injury, with exfoliation of bone. I attended him during two months of confinement in bed from the aforesaid cause." A card photograph of the patient, taken at the Sloan Hospital, was contributed by Surgeon Janes (Card Photos, A. M. M., Vol. 2, p. 22), an enlarged copy of which, taken at the Army Medical Museum (Surg. Phot. Series, No. 130). is represented in the cut (FIG. 150). The pensioner was paid March 4, 1879.

William D. Gilbert, a veteran of the civil war, died Tuesday night, aged 81 years. He was a member of Co. B, 12th Regt. Vt. Vols., enlisting Aug. 26, 1862, serving until July 14, 1863; re-enlisted in December of the same year in Co. C, 6th Regt., and served until Oct. 12, 1865, receiving wounds during this period of service from which he never recovered. He was a member of Randall Post, his funeral Friday morning being attended by the Grand Army men. Interment was at English Mills.