Frank C. Grant of Gardena, Calif., has been spending several weeks at his boyhood home in Concord, Vt., and with his nephew, Augustus Grant, in Windsor.

Born and raised on a farm among the Green Mountains, he is never quite so happy as when he is once more roaming the old familiar pathways, catching the speckled trout and living over again the scenes of his childhood. Why, he is just a boy with that same sunny disposition that has followed him all through his life.

Mr. Grant was born in Concord, Vt., on August 16, 1835, the son of Ira Grant and Lydia Williams. He was educated in the public school and when he attained manhood was a successful teacher. He was superintendent of the Sunday school, and choir leader at the Methodist church in East Concord for 22 years.

Mr. Grant followed his father's vocation as farmer for at least 50 years and taught school during the winter. At the age of 25 he was united in marriage to Miss Lydia A. Barker. Three children were born to this union, only one of them surviving, Frank W. Grant, with whom he makes his home at Gardena, Calif. During the winter of 1860-61, when the first call came for volunteers, Mr. Grant was teaching school in Kirby and he sent forth from that school five young men to fight for their country. They were Dexter and Frank Cobleigh, Edson Ranney, and Dan C. Burroughs.

Mr. Grant soon followed and enlisted in 1862 at Concord, in the 11th Vermont regiment. During the three years that he served, 114 days were spent at Andersonville prison. While there, such a ravenous appetite was created by Mr. Grant that he has always attributed his long life and robust health to those few months of dieting. Only once was he at home on a furlough, staying with his family for a month and then convalescing at the Sloane hospital in Montpelier, leaving later for the front, where he remained until the boys came marching home.

The first reunion held at the Kirby schoolhouse was 35 years after the close of the Civil war and surely, truth is stranger than fiction, for there stood the master and those same five boys older grown and battle scarred, yet nevertheless triumphant and happy. It was a great reunion and in five years from that day they were all assembled together for another great jubilee. Off and on reunions were held, the last one taking place when Mr. Grant was 80 years of age. Out of 36 original scholars 19 were present. Mr. Grant was the only boy in blue, his old comrades having passed to the great beyond.

He went to California in1907 to live with his son and fully enjoys the climate there during the winter months. As soon as the birds begin to sing in springtime, Mr. Grant longs for the old Vermont hills, the maple sugar, and last but not least, the life-long New England friends that are so loyal and true.

Mr. Grant left Gardena, Calif., June 7 of this year for Vermont coming by the way of Washington, D. C. He wanted to have a little chat with President Coolidge. He was heartily received by our honored president in the East room of the White House. It was in the same room that Mr. Grant met Abraham Lincoln many years ago. Mr. Grant is a staunch Republican and cast his first vote for John C. Freemont. When asked how he liked Calvin Coolidge his reply was this: "Fine, Just fine." And after bidding the President goodbye he set out for his daughter-in-law's home which is in Rockland, Me. While sojourning there he went deep sea fishing at the Isle of Matinicus and had the good fortune to catch a 40 pound cod which is being salted and cured at the cannery there in Maine, and which will be delivered to him on his arrival in California within a few weeks.

He had a most wonderful 91st birthday, over two hundred friends and relatives being present at his old home in East Concord. There were plenty of good things to eat.

A huge birthday cake decorated with 91 candles was certainly the center of attraction. Mr. Grant is perfectly well, has good hearing, reads without glasses, has a good head of hair, and is straight and portly. He believes in Prohibition. Why his friends have often been heard to remark that he brought up his son so temperate that he would not allow him to sit under a sour apple tree when it was raining.

Mr. Grant has never used tobacco in any form. He has been a strong Methodist all his life. When asked if he thought the churches were failing to interest humanity his reply was, "No, emphatically no. However, I am glad to say that ministers can go about now with a smile on their faces. I can remember the time when we hated to see the minister approaching, he looked so sorrowful. Sour-faced religion has not place in the world today," said Mr. Grant. When asked what he thought about the modern flapper he said they were all right. "Short skirts and bobbed hair are quite the proper thing," said Mr. Grant, "they are sensible and comfortable." Only one thing seemed to bother him since he had lived such a long number of years and valued his life so highly, it was this: He certainly would be afraid of dying with painter's clay today. Mr. Grant loves little children. What a difference there is in the life of Frank A. Munsey who lived only unto himself and when he died left no one to mourn his passing. He deliberately dumped his millions at the feet of modeled clay. Not so with Mr. Grant. "He lives for those who love him and the good that he can do. And he has always kept a smiling face his life long through."

While at East Concord Mr. Grant went fishing with" his nephews at Umbagog Lake and helped to catch one bushel and a half of horn pouts and 30 pounds of pickerel. It is also reported that he did ample justice to the repast when it was placed on the table. Can one imagine a boy of 91 years sleeping out in a tent and as happy as a lark?

Mr. Grants' motto through life has been:

Mr. Grant is still wearing the smile that won't come off over a letter that he received from Calvin Coolidge congratulating him on his 91st birthday. That letter from the President will help to cheer him on his way far more than all the bouquets in the world after he is dead. Mr. Grant has had considerable trouble trying to wear his hat since he received the President's letter. Whether his hat has shrunk or he has got a swelled head, he is undecided which way it is.

Mr. Grant is a member of the Masonic fraternity which he joined many years ago. He has one sister, Mrs. Viola Stacey, 83 years of age living at Concord.

Before there was any Grand Army post in Concord, Mr. Grant and his Sunday school scholars used to decorate the soldier's graves on Memorial Day. In two years from now Mr. Grant expects to return to Vermont in an airplane. If he alights in Windsor we will be there to greet him with a brass band, a white charger and a body of mounted men. Mr. Grant has crossed the continent 12 different times, always going alone as he says that all he can do is to look out for himself. Bon Voyage and May God be with you till we meet again.

Frank Cutter Grant, born August 16, 1836, in Concord, Vermont, enlisted August 8, 1862, and was mustered in as a private in Co. A, 11th Vermont Infantry on September 1, 1862. He was described as 27 years old, 5' 5" tall, light complextion, hazel eyes and black hair. Frank was taken prisoner at the battle of Weldon Railroad on June 23, 1864, was incarcerated first at Richmond, then Lynchburg and Danville, Virginia, and later transferred to Andersonville, and finally at Millen, Georgia. Released from prison in November, 1864, he returned to Vermont for his convalescence, rejoined his regiment at Burkesville, Va., April 21, 1865.

A cousin of the family, Samuel Baldwin, served in the 80th Ohio Infantry during the Civil War.

They are presented here in the hopes that someone will be able to help identify them. 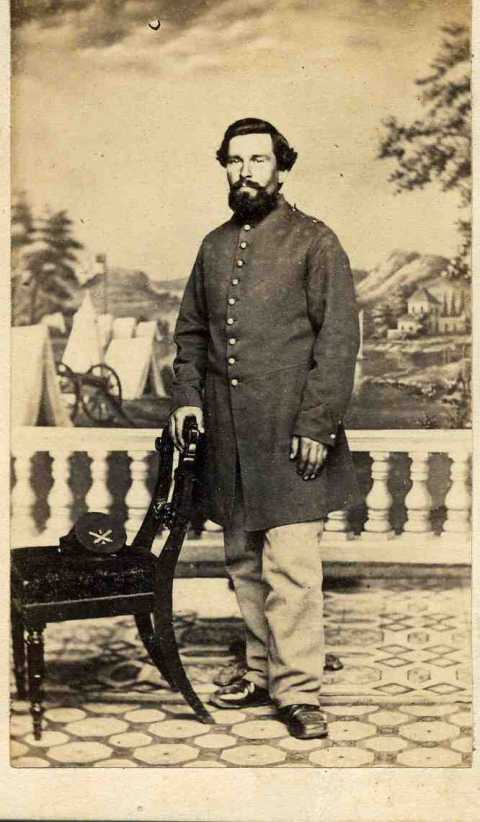 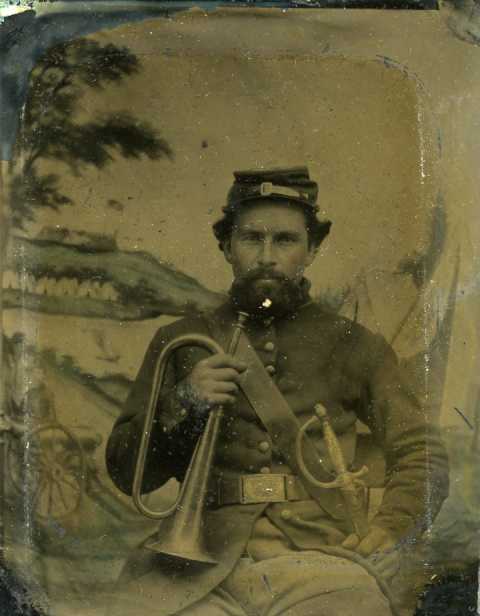 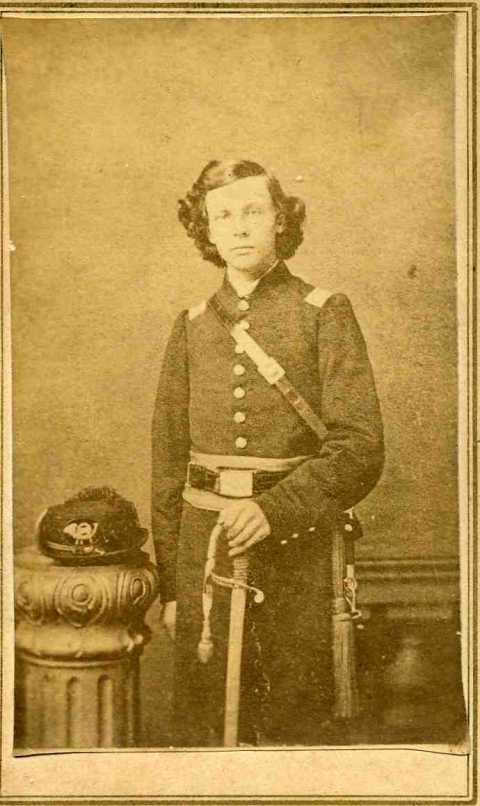 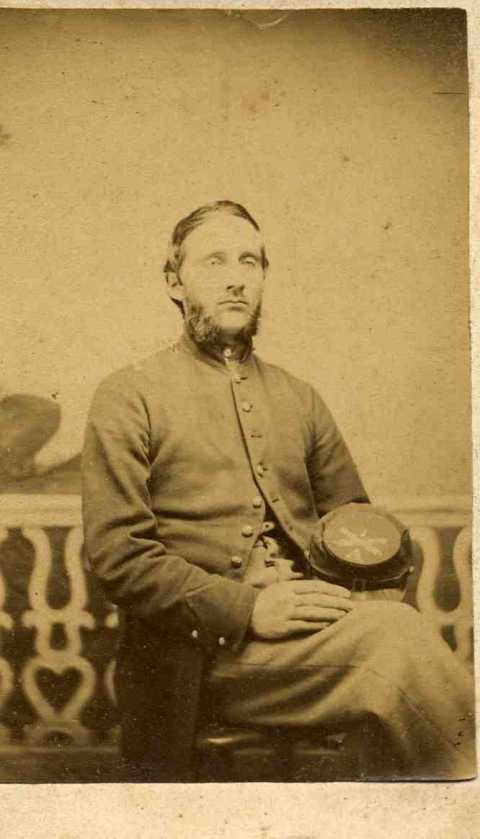 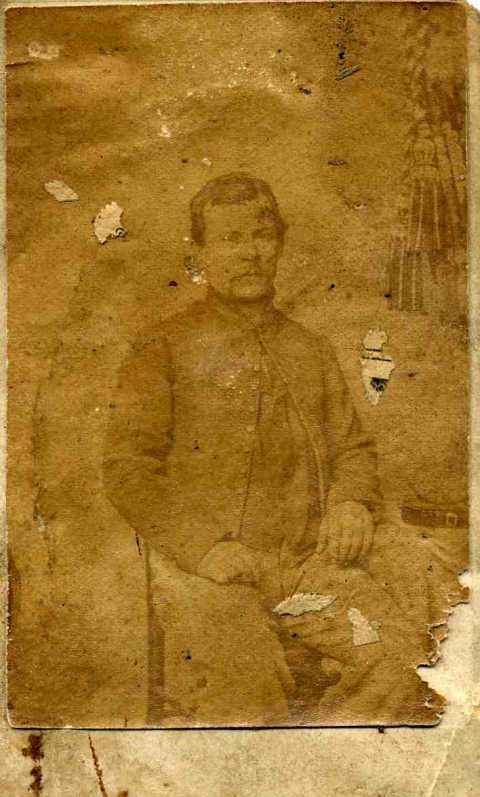 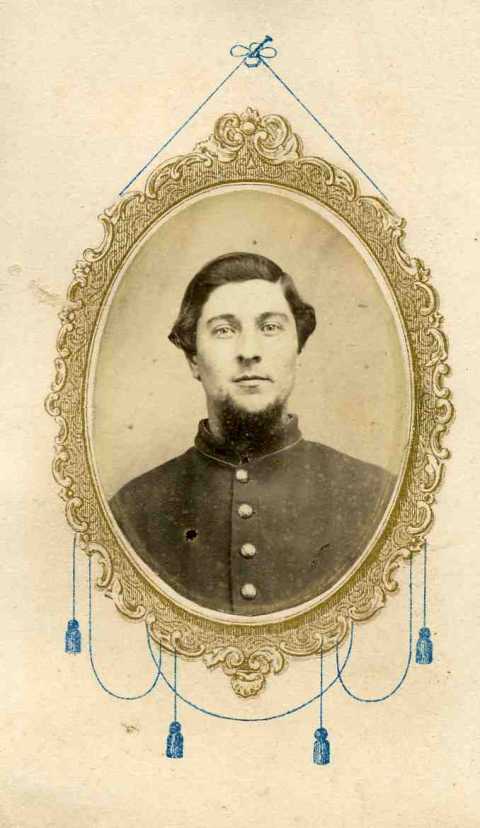 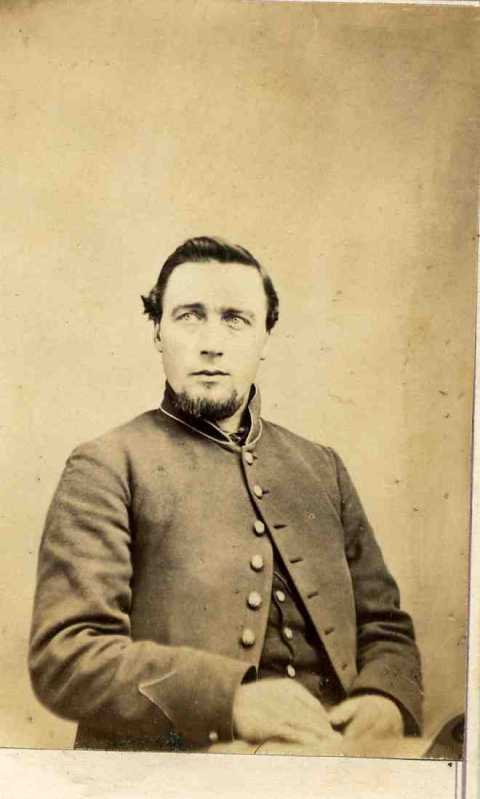 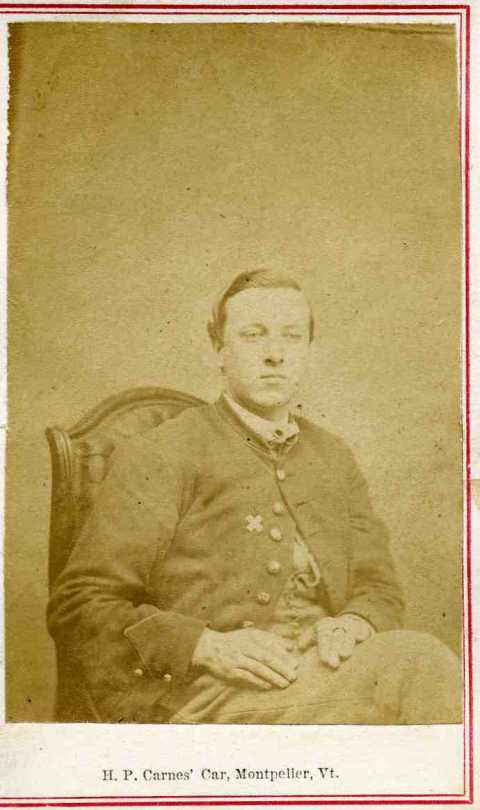 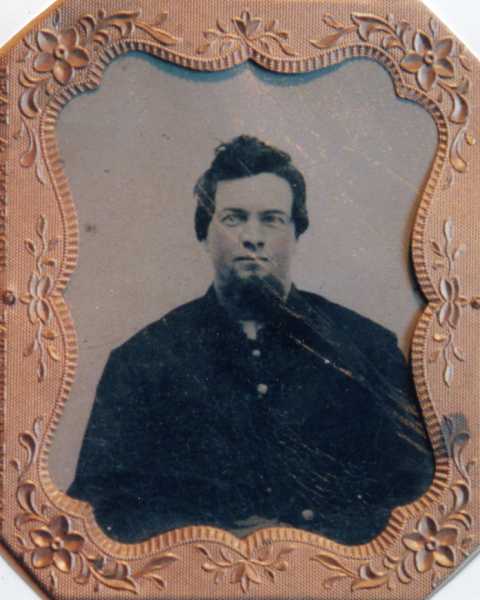 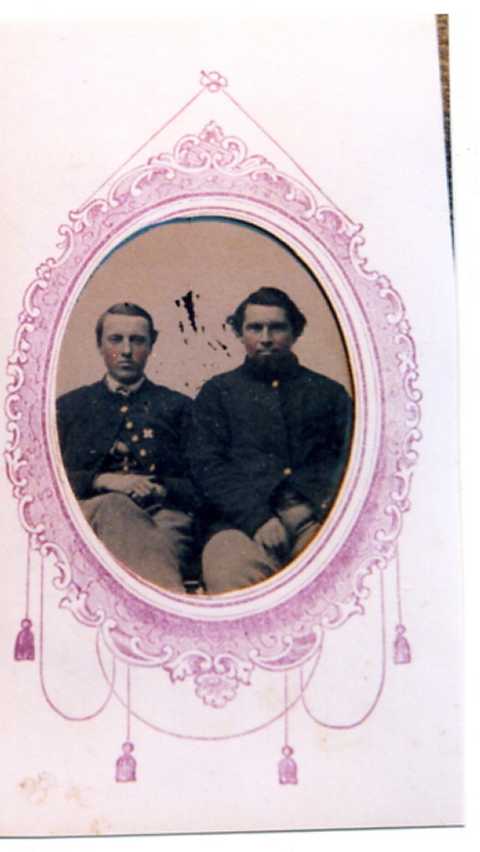 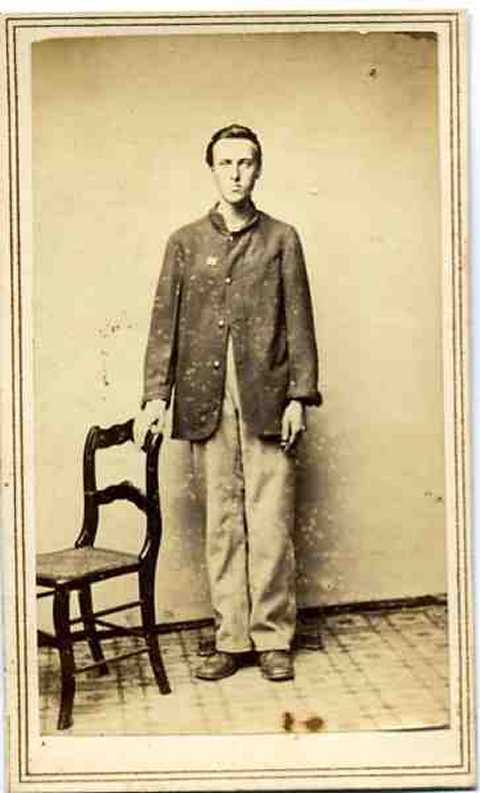 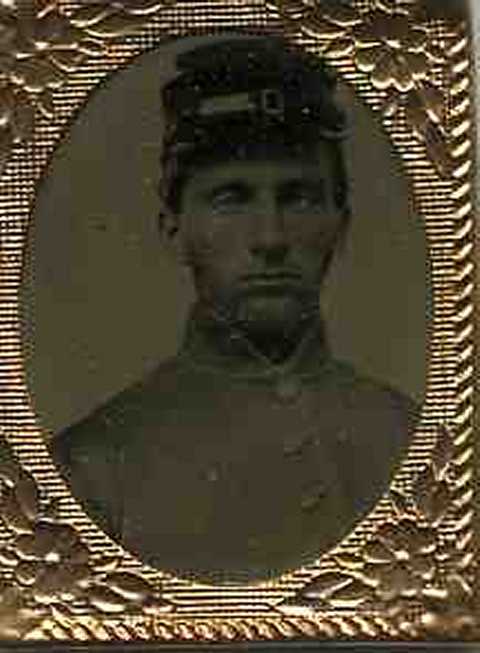