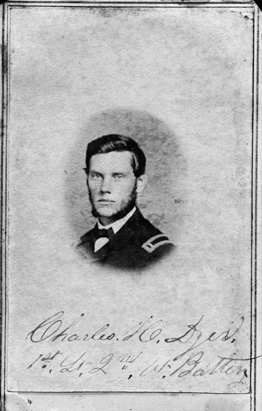 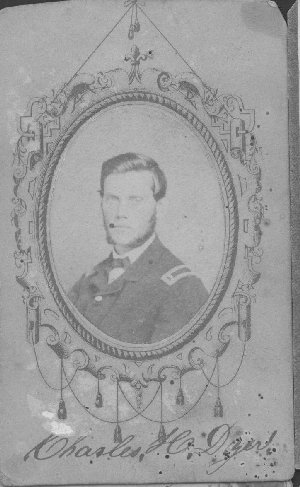 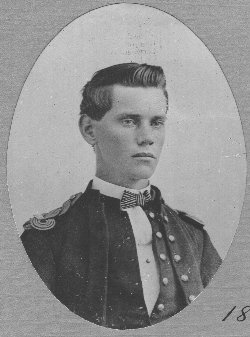 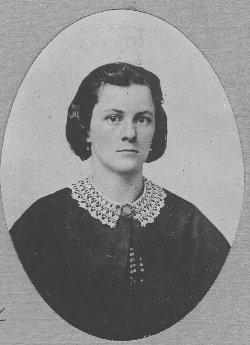 Charles Henry Dyer was born in Standish, Cumberland County, Maine in 1841, and four or five other children in other years. When the Civil War broke out, Charles volunteered in a local company for three months and then joined the Second Battalion of Vermont Light Artillery as a private. He took a great deal of interest in military life and procedures; and by the time his battalion was ready to embark at Boston, his work was considered good enough to advance him to rank of First Lieutenant, which he held during the war.

Moving toward the scene of battle, his contingent first put into harbor at Mobile, but the report is that the town made it too hot for them to make landing or stay for any length of time. After the skirmish in Mobile, they moved on to New Orleans, where they were encamped for several months.

In New Orleans, the boys, of course, met many of the local girls; and, despite the strong sectional feelings, they made many friends and amorous conquests there, as is the way of all soldiers In all wars and in all places. Charles' command was moved to a permanent camp at Port Hudson up the Mississippi River from New Orleans and not far from Natchez. This camp was apparently a sort of obser-vation post from which reconnaissance squads were sent out.

The soldiers were given liberty to go to New Orleans, especially the officers, and this made it possible to renew and maintain their acquaintances with favored young ladies. Charles, being a First Lieutenant, was among those who enjoyed this privilege and he went as often as he could. It was on one of these excursions that he met his future wife.

Many stories have been told of this period of our country's history, and one that Charles passed on to his family described the use of cotton bales and sacks of sugar as breastworks along the levy and streets. The misuse of sugar in this way cut to the quick of blockaded and almost foodless New Orleanians. Making every effort to get food of any kind in any way, the women would go down to the breastworks and fill their aprons full of sugar from the scattered sacks. Just when they would get started back with their precious burdens of much-needed sugar, some prankster watching them would cry out, "The Yanks are coming," and the startled women threw their aprons and sugar to the wind as they ran for home.

At Port Hudson, Charles was attached to one of the sorties sent out on one occasion to scout the area. They had gone a considerable distance and were pass-ing through a cut (many of the roads in that locality had been worn down in the soft earth until at some points where the land rose, they were 6 to 10 feet deep). The Rebels, concealed by the deep grass along the top of the banks of this cut, raised up and poured down on the scouting party a withering fire. Having quickly routed the scouts by well-directed ambush, they disappeared into the woods, leaving several of the Union soldiers killed and the company badly confused and retreating.

Charles was among the wounded, having a bullet pass through his leg to wound his horse fatally. He became separated from his command, but finally arrived at a farmhouse gate, where he fainted and fell off his dying horse, which did not survive the night. The farmer took him in and cared for him until help was found. After a short hospitalization, Charles was sent back to Boston for recuperation.

Shortly after his return to his outfit sometime later, he was married in New Orleans to Miss Addie Francisco. She was the daughter of Eunice Jennings Fran-cisco and a French father of whose ancestry the Dyer family has no record, except that M. Francisco was a man of the roving, speculative type who was rich one year and penniless next. Addie's mother, Eunice, was from an English family named Jennings. Her first husband, whose name was Taylor, had been killed in Florida during the Seminole War under Andrew Jackson. She was married in the early 30's to M. Francisco; and to them a daughter, Addle, was born in 1841, the same year in which Charles Dyer of the Standish, Maine, was born.

After the marriage of Addle and Charles, they went to live in camp at Port Hudson on the Mississippi River, where life was never dull and they were often under direct fire from the Rebels across the river. In later years, they often remi-nisced about those wartime conditions and passed on to their children many stories of life in camp and the moments of terror when cannon balls came whis-tling above their temporary shelter.

After his service was over, the young Lieutenant took his wife to the north, where they settled in Medfield, Massachusetts. Charles had a number of relatives there, some of whom were engaged in the straw hat business. He found work as a carpenter in Boston.

I have tried to translate this diary as much as possible in the form in which I found it - leaving out punctuation, and leaving in the mis-spelling. In some cases, I was unable to interpret the words, and have marked them with a (?). In many cases, you will see the spelling for the same word, such as Parapet and Piripet, written differently. I was able to find Ship Island on the map. It is located just south of Bioxi, Miss. in the Gulf of Mexico. However, I could not find the various Passes which he mentions, though they could easily have been changed in the over one hundred - thirty years, by man, or the mighty Mississippi River itself.

At the back, you will find several pages which were out of line, and a bit of duplication, but with enough difference to learn some more about that era. There is also a series of love letters from C. H. Dyer, to Addie Francisco, whom he met in New Orleans at this time, and later married.