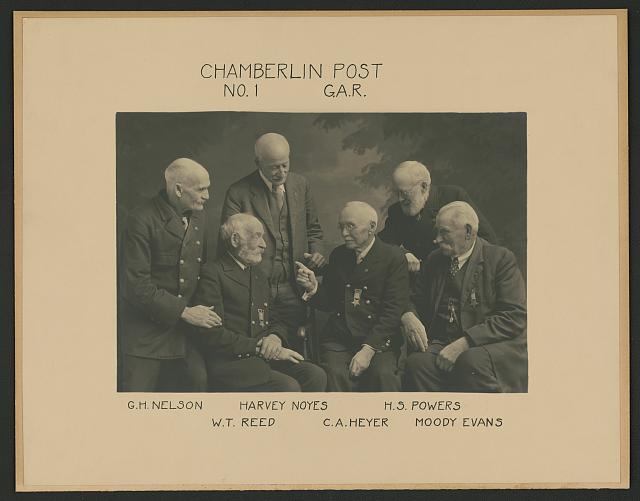 The community of Springfield during the 73rd encampment of the GAR and allied orders this week welcomed two veterans of the Civil war, Commander Charles A. Heyer of the Department of Vermont, of St. Johnsbury, and Senior Vice Commander Charles Emerson of Lancaster, N. H. Both served in the old Eighth Vermont Regiment of Volunteers. Mr. Emerson enlisted in the Union army two months before his 14th birthday and Mr. Heyer at the age of 15. Both served through the rest of the war.

While there are only eight or nine veterans now living in Vermont and only a few throughout the nation, most of them now very feeble, these two sturdy old gentlemen are vigorous both in body and mind. Mr. Heyer lives alone in his St. Johnsbury home, doing all his work about the house, while Mr. Emerson travels widely. Both remember clearly the days of the Civil war, but they are alert to things in the present too and still have the zest for life that comes from active useful lives, and a sense of humor.

Heyer is a Massachusetts native. Mr. Heyer who is 91, was born in Mattapoisett, Mass., but came to Vermont as a boy. Although he was only 15 when he enlisted in February, 1864, he said he did not have to lie about his age though the limit was supposed to be 18. Along toward the close of the war when many of the older men had been killed or wounded, the situation became so desperate that boys had to be accepted.

He served until the end of the war in April, 1865. During his service he was stationed in Virginia, guarding the railroad lines and as he put it "taking care of Mosby's Guerillas." By coincidence he joined the picket line on which Mr. Emerson had served, just after the latter had been taken prisoner, but the two men did not become acquainted until after the war.

After he was mustered out Mr. Heyer learned the machinist trade and engaged in it until he retired about 30 years ago. He worked in many places, including Lamson, Goodnow & Yale of Windsor, predecessor of the present Jones & Lamson Machine company of Springfield, in 1867 and 1868. For many years he was employed by the Fairbanks Scale company of St. Johnsbury.

Modest and reticent about his achievements, it was difficult to make him talk about himself. His wife died three years ago, and since that time he has kept house himself. St. Johnsbury friends related that he even cleaned house this spring, and when a neighbor remonstrated with him at finding him atop a ladder, he jauntily declared that he guessed he would finish the job. He drove a car until a short time ago. A slender man, he appears to be in excellent health and much younger than 91.

Mr. Heyer joined the G.A.R., in the 1870's and has been active ever since, being re-elected Commander this week for the third term.

Mr. Emerson, who is 92, is over six feet in height and has a straight carriage that many a younger man might well imitate. His stature at 14 made him appear older, and he lied about his age when en enlisted.

Emerson was born in Newbury. His war service was eventful, for he participated in the Battle of Winchester and saw Sheridan come in after his famous ride. In 1865 while on picket duty on Summit ridge, he was wounded and captured by a member of Col. Mosby's Guerillas and sent to the Libby prison at Richmond. After he was paroled from prison he rejoined his regiment and was on duty near Washington at the time of Lincoln's assassination. He was one of those detailed to guard the city to see that no one either entered or left the city. He remembers clearly the escape of Booth and the capture of some of the other plotters.

The tale of his capture is a thrilling story. He engaged in a hand-to-hand fight with a Confederate soldier, who was mounted. Finally he was shot in the head and surrendered. After being mustered out in July 1865, Mr. Emerson bought a plantation in Virginia, and there he became friendly with the village postmaster. One day the postmaster related the tale of his capture of a young Union soldier whom he called "the kid" because he was so young. Then Mr. Emerson asked him if he thought he would remember "the kid" if he saw him. The postmaster replied that he might not since the boy would probably have changed a good deal in 11 years. As the reader will readily guess, "the kid" had met his captor. After some years in Virginia, Mr. Emerson returned to New England and engaged in farming and lumbering operations mostly in New Hampshire, retiring some years ago. He has travelled in every state in the Union and spends his winters in Florida. Four years ago he went in a car to California with his son and daughter. And has he given up traveling? Not he! His thoughts are now concentrated on plans for the National G.A.R. Encampment in Springfield, Ill., this September, and he is trying his best to persuade Commander Heyer to go along with him.

During the World war, Mr. Emerson was active in the Victory Bond drive. So alert, friendly and humorous were these two old soldiers that this interviewer found it a rare pleasure and honor to talk with them. We hope that both well attend many more G.A. R. conventions and they will be welcomed with open hearts where ever they go.

Taps sounded Sunday for Charles A. Heyer, 94, department commander of the GAR of Vermont, who died following a major operation. He was taken ill at Burlington three weeks ago while he was attending the annual encampment, where he was elected department commander for the fifth term. He had been in excellent health and attended the last national encampment at Columbus, O., of which he was assistant adjutant general. He was born in Mattapoisett, Mass., March 11, 1849, coming to Vermont with his parents in 1860 from Littleton, N.H. When 15 years old, he enlisted in the Eighth Vermont regiment, serving from January through June, 1865, guarding the railroad in the Shenandoah Valley. He was employed for 40 years in the machine shop of the Fairbanks Scale company. His death leaves only two Civil War veterans in Vermont, Moody H. Evans of St. Johnsbury Center and Gilbert Lucier of Jay.