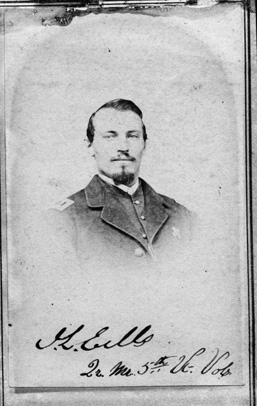 Was Civil War Veteran With Proud Record of Active Service

The funeral was held Tuesday afternoon at 2 o'clock at the funeral parlors of A. J. Blackmer, Rev. S.H. Barnum of Weybridge officiating. The bearers were J.C. Eells, T. L. Eells, J. H. Howe, J. H. Fletcher, George Eells and Amos Wilson. There was a profusion of beautiful flowers, some sent by members of the Russell Post, G.A.R. The ladies of the G.A.R. took part in the funeral service. Burial was in the West cemetery.

Mr. Eells was born in Cornwall, October 21, 1833, the son of John and Lucinda Landon Eells. At the time of the Civil war he enlisted as a private in Company F, 5th Vermont regiment and served until the end of the war. He was made corporal soon after enlistment and promoted to sergeant and Orderly sergeant.

Later Sergeant Eells received commission as second lieutenant, and was soon promoted to First Lieutenant, serving on General L.A. Grant's staff for about a year. Finally he was promoted to the grade of Regimental; Quartermaster, serving in that capacity until mustered out of service. He was a member of W.P. Russell Post, No. 89, G.A.R., of Middlebury.