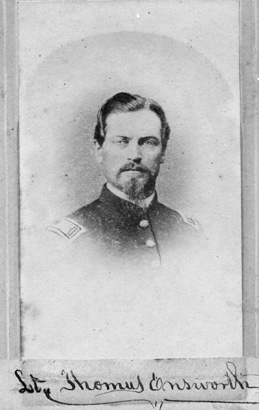 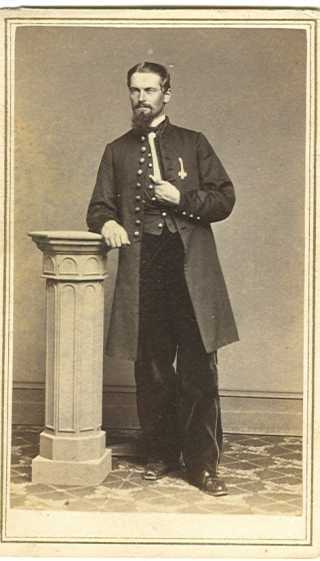 Mr. Editor, -- I take this opportunity to converse with you through the silent medium of the pen. The pen has been termed more mighty than the sword. But I think at the present day the pen must give way to the sword. What is the matter with England? -- We do not seem to have any very alarming news from her just now; has Johnny had a relapse? Will he not wake again soon, to shine forth in his mighty pomp and splendor and make another daring and threatening demand of us. Let him wait a few days until we have crushed out this rebellion at home than we will give him a warm reception.

I cannot but notice as I read the papers, the feelings the different States have towards their own troops. For instance, with how much more pride Vermont looks upon her own troops than she does upon troops from any other State. I admire the system of State lines and the emulation which it induces. I commend State pride, I have always maintained it for myself. Of all the thirty-four States in the Union, there is no State for which I have the same feeling as I have toward that in which I first drew my breath - Vermont. I love that Green Mountain State where I was born; where I drank in freedom her pure breezes that came over her hills, or the rough winds that whistled around my early home. There is no spot on earth so dear to me as that, and when I hear of some brave and noble deed performed by one of my own statesmen, I feel a thrill of pride and delight which I do not feel in any other case. I regard all as my countrymen no matter in what State they were born, but those from my own State are not only my countrymen, I feel they are my brothers. I complain of no feeling of this kind, unless it leads to do injustice to others, any more than I complain of a man for loving his own family and feeling a peculiar tenderness for that family which he feels for no other. I do not ask, nay I oppose the attempt to centralize and make this a great central republic. Do this and you deprive it of its true strength, vigor and proportions.

Is this a supreme government, or is it a mere rope of sand which any of the contracting parties may break and be permitted to go out and set up an establishment of his own? This is much like what some of the contracting parties of the United States are trying to do. This question is now to be decided by war there is no other alternative by which it may be settled. War is regarded by many people a terrible calamity. It is looked upon as the greatest of all evils, and many are they who have such a horror of war that they think peace cheaply purchases at any price, even at the expense of national dishonor and national degradation. But war is never itself the evil. The evil is the cauase which precedes and leads to it. It our case it is only a terrible efort the nation is making to rid itself of a disease which a body politic has contracted, which was gradually approaching the seat of life and threatening entire dissolution. To the eys of true patriotism our condition to-day is far less calamitous than it was four years ago. The noble and heroic qualities which war call forth do more to regenerate and revivify a nation in three or four years than a century of prosperity can do. Generally with prosperity we wax weak, we lose our noble qualities and cease to be what Almighty God intended we should be -- men. NoNot only men who can bow lowly before authority and submit in all deference, but men when the right is invaded, when the government is threatened can stand up in its defence, willing not only to pour out freely their treasures but their blood. I think we, as a people, need this kind of correction which war is bringing to us. War is a business which required the exercise of active virtues in which man is wrought to the highest pitch of his manhood and puts forth the full strength and energy of his masterly nature. -- It is only then that we see what man can be. I therefore do not lament this war, I lament the causes which made it necessary. I say, let it be a war, not a mere mimic fight, but a stern unrelenting war until peace comes. -- Now, that war is upon us we must not only have the courage to fight, but that still greater courage, the courage to kill and the courage to die.

Now let us either give up all intentions of having war, lay down our arms and let the enemy trample on our necks and we prove ourselves cowards, or else take up our arms and meet the enemy.

We are having very unpleasant weather at present. It has rained every day but two for the last sixteen days. The mud is anywhere from two to eighteen inches deep.

We are having a great deal of sickness at present, owing some to the weather but more to the Sutlers.The Sutler's tent does more towards filling the hospital than anything else. Some of the Sutlers have done all in their power to prevent the soldiers from signing the allotment roll. They even went so far as to have handbills printed and circulated throughout the brigade, saying it was a method the government was taking to swindle the soldier out of his hard earned wages. I wish Senator Wilson of Mass., might have power over these fellows. We are infested not only with this class of men but with another class still more troublesome. We find that in many instances that our State pay cannot be safely drawn. You have men in your town, and those too from whom we had a right to expect betters things, that would have gladly, and have even tried to cheat a soldier who enlisted at Windsor out of part of his State pay. I will withhold those men's names this time, but I hear of the like again they shall be shown up to the public. Respectfully yours, T. E.

Own Men. - Lieutenant Thomas Ensworth, 4th Vt. Vols., from Windsor, was killed in the late battles by a spent ball from one of our own batteries. Others of our men were injured in a similar manner while our artillery was firing over them.