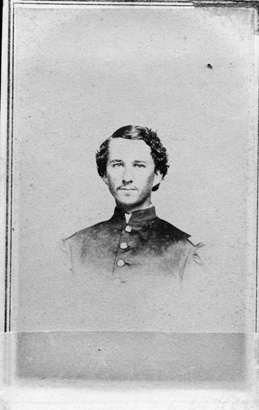 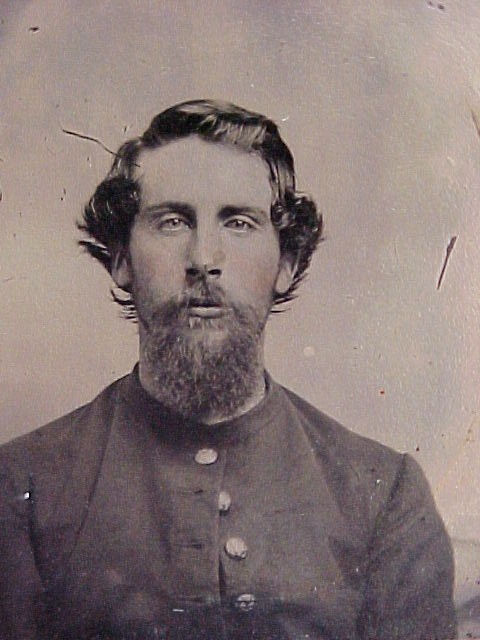 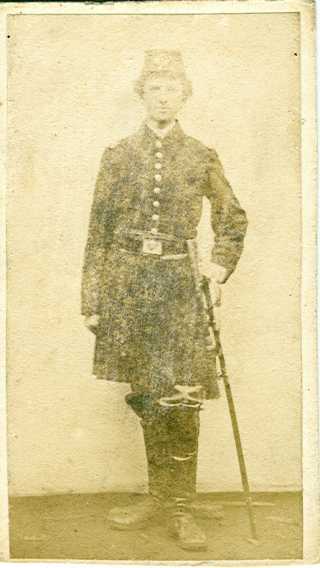 Killed. - It is our sad lot to record the death of Captain Dennie W. Farr of Co. C, 4th Vermont regiment, and well known to many in this village and neighborhood. He was killed in the great battle of May 5th, by a ball through the head. He went out as 2d Lieut. in Co. F, 4th regiment. On the promotion of Wm. C. Holbrook he was made 1st Lieut., of the same company, and afterwards was made Captain of C. C, which he commanded at the time of his death. He was a young man of excellent character, much beloved and respected by all who knew him. He has left many friends and young wife to mourn his death.

- The Brattleboro Phoenix says that Capt. [Joseph W.] Carpenter, Capt. Farr and Sergeant [Luke W.] Kendall, all of the 4th Vt. Regiment, who were killed at the dreadful battles of the Wilderness, were buried on the field of battle not too far from where they fell, and very near to each other. The spot is so well designated that the place of their burial can be easily ascertained.

Mrs. Farr, who left town a few days since to procure the remains of her husband, Capt. D. W. Farr who fell in the Wilderness battle, sends word to his friends that she has been successful. His remains were found and identified, without much difficulty and they are expected to arrive here in a few days. A ring was found upon one finger that Mrs. Farr had placed on it before Capt. Farr left home.

Capt. W. D. Farr - We stated last week that Mrs. Farr, widow of Capt. Farr, Co. C, 4th Vt. Vols., who was killed by a ball through the head at the battle of the Wilderness, May 5, 1864, had gone, accompanied by her brother and sister-in-law, the widow of Lt. Col. [Addison] Brown, to Virginia, to obtain and bring home the remains of her husband. The party went from Washington to Fredericksburg by boat and wagon, and thence 13 miles to the Wilderness attended by a guard, over many a field made historic by bloody battles fought thereon. They found the grave without difficulty. It had not been disturbed, but everything was as when left by friends who buried him on the night of that dreadful day of battle. The spot had been carefully described, the body buried as decently as circumstances would admit, and a board placed at the head of the grave, with the Captain's name thereon, and a drawing sent home at the time of his death, so designating the spot that it could be readily found. The body was disinterred, put into a coffin with a metallic lining, and made air tight with cement. A ring placed on his finger by the hand of affection was recovered, thus rendering the identity of the body certain. The party returned to Fredericksburg on the evening of the same day they left there, and the body was sent home from Washington by express, arriving here on Monday last, Mrs. Farr and her friends having arrived on Saturday of last week.

The body on arriving at the depot here was taken charge of by the members of the Columbian Lodge of Masons, of which he was a member, and conveyed to the house of his father-in-law, Rev. A. Brown, where it remained until Wednesday. On the afternoon of that day it was borne to Chesterfield, N.H., his native place, attended by a funeral cortege consisting of his relatives, friends, and members of the Lodge. The funeral services were in the church in the west part of town, near his father's residence, and the cemetery. The services in the church were conducted by Rev. F. Frothingham of this village and consisted in the reading of selected passages of the sacred Scriptures, prayer, and an appropriate and touching address. The house was filled with friends and acquaintances of the deceased, who came to pay their tribute of respect to the remains of one whom they loved and honored. From the church, the body was borne to the grave, and there with Masonic honors and the usual services of the Order, all that was mortal of the brave and noble soldier was committed to the final place of repose. The service at the grave was conducted by C. A. Miles and was beautiful and impressive. Capt. Farr was 24 years of age; lived a pure life, sustained an unblemished character, was a brave and faithful officer and soldier, left behind him a blessed memory, having offered himself a sacrifice in the cause of his country - the cause of freedom, justice and right.

Capt. Dennie W. Farr was born January 7, 1840, on an old Chesterfield, New Hampshire farm, to Worcester Farr and Abial Kneeland. He was commissioned Second Lieutenant in Company F, Fourth Vermont Regiment on September 7, 1861, then promoted to First Lieutenant on January 9, 1862, and promoted to Captain of Company C on August 13, 1862.

Dennie Farr and his family were Universalists, and often came to Brattleboro to hear the popular Rev. Addison Brown. On July 31, 1863, soldier Farr married Mary Hannah Brown, the daughter of Addison and Ann Elizabeth Wetherbee.

Dennie Farr was one of the first Union soldiers killed in action in the Wilderness in Northern Virginia on May 5, 1864. He was waving his sword to encourage the troop advance when he was struck in the head by a Minnie ball. Captain George Blood French described his death to Mrs. Farr, who brought the remains back for burial in the cemetery near West Chesterfield.

Mary Brown Farr Dunton was born on July 5, 1842. She was eighty-eight years old in 1930 and living in the Brattleboro Home for the Aged. She died in Chesterfield in 1935.