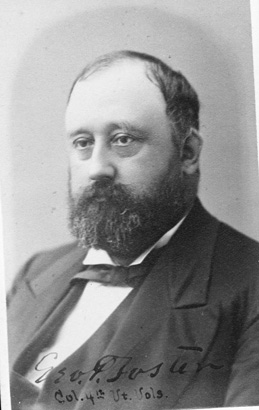 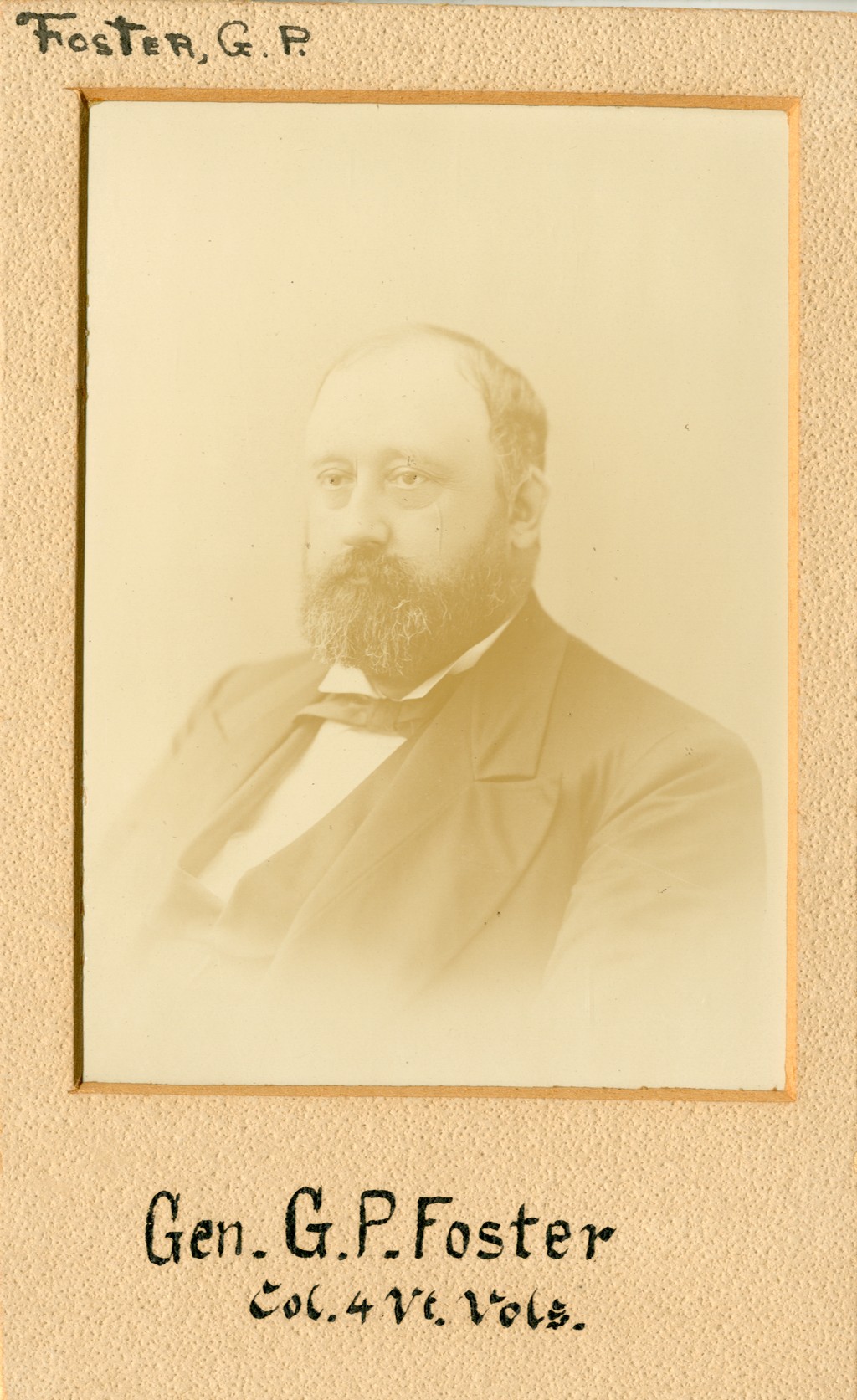 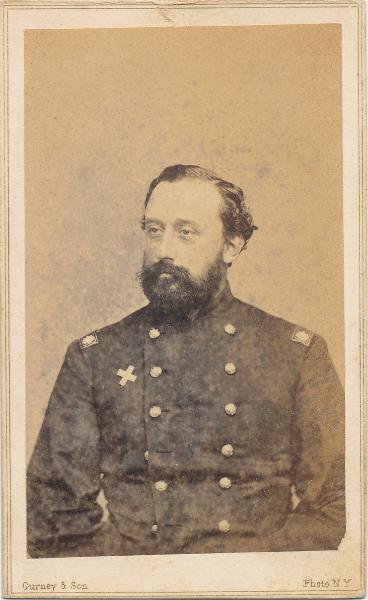 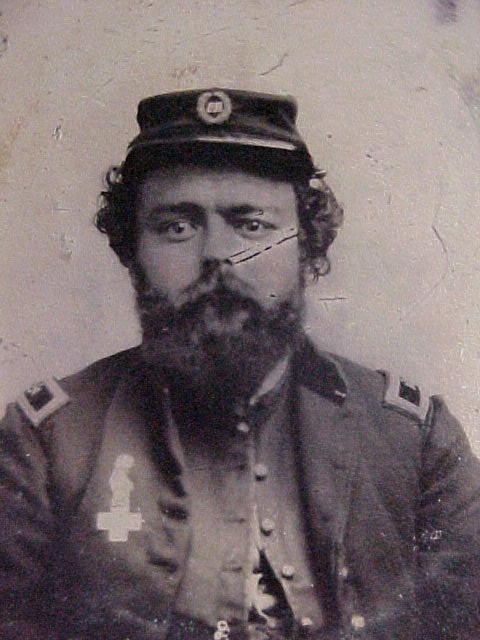 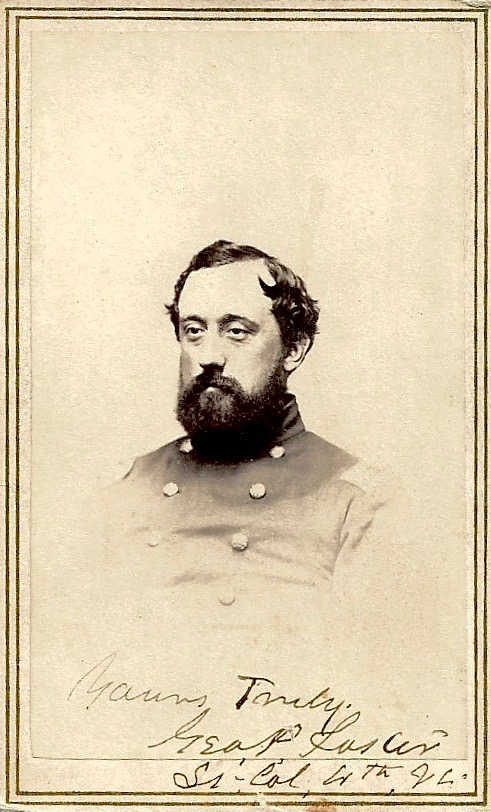 Gen. George P. Foster was born in Walden, Vt, in 1835. He had an academic education, going to Morrisville Academy. In September, 1S61, he enlisted in the Fourth Vermont Regiment, and was elected captain of Company G; was commissioned as such Sept. II, 1861, and was mustered into the United States service on Sept 21, 1S61, at Brattleboro, and left at once for the seat of war. In July, 1862, he was promoted to major of the regiment. On Nov. 5, 1S62, he was appointed lieutenant-colonel, and Feb. 3, 1864, he was promoted to colonel of the regiment, and commanded it thenceforth until it was mustered out of the service, July 13, 1865, at the close of the war. Colonel Foster shared the arduous service and the glory of the old First Vermont brigade, of which he was one of the bravest and best officers, and in which his regiment had a name second to no other as a fighting regiment On May 5, during the fearful fighting in the Wilderness, in which the Vermont brigade was kept so constantly at the front and lost 1,400 officers and men, killed and wounded. Colonel Foster was severely wounded in the thigh. Gen. L. A. Grant, later Secretary of War, in his official report, alluding to Colonel Foster's wound, speaks of him as "an officer whom we may well delight to honor."

Colonel Foster returned to the command of his regiment as soon as his wound permitted; went with the brigade to the Shenandoah Valley and distinguished himself at the battle of Cedar Creek. Oct 19, 1864. At the opening of that memorable battle he was corps officer of the day for the Sixth Corps, and had charge of the picket line upon the right At a later stage he commanded the brigade and the left of the line at the last stand made before Sheridan arrived, when, as was said in one of the accounts of the battle, "That unyielding centre, held like a wall of adamant by the Vermont Brigade, saved the army." "For gallant and meritorious services before Richmond and in the Shenandoah Valley" Colonel Foster was breveted as Brigadier- General from Aug. i, 1S64. In 1870 General Foster was appointed United States Marshal of Vermont, and held the office at the time of his death, having been twice reappointed. He was a capable and efficient marshal, and distinguished himself especially during the Fenian invasion of Canada from our northern border, in 1867, when he arrested General O'Neill, commanding the Fenian forces, in the midst of his army, and took him from the field in a carriage. The only city office he held was that of Chief Engineer of the Fire Department, which he accepted and held for a single year, in 1S76, in order to straighten out what threatened to be a troublesome muddle in the department. He d. March 19, 1879. Res., Burlington, Vt.

General George P. Foster, United States Marshall for this district, died at his residence in Burlington last evening a few minutes after nine o'clock. General Forter, as a civil officer, was capable and deservedly popular, but our heart at this hour irresistibly reverts to his military career, for we know what mourning there will be in the ranks of "The Old Vermont Brigade," when they hear of the death of this genial and gallant old comrade, who commanded them at Cedar Creek when the Vermont Brigade was the rock upon which the Sixth Corps leaned while the rest of our broken army was rallied. Gen. Foster entered the army as captain of Co. G, 4th Vermont Volunteers, in September 1861, and was soon promoted major of his regiment. He was commissioned lieutenant-colonel November 5, 1862; and full colonel Feb. 3, 1864.In the dreadful slaughter of the Vermont brigade at the battle of the Wilderness, Col. Foster fell severely wounded. Recovering from his wounds he resumed his command and during Sheridan's great campaign in the valley, fought with characteristic coolness and courage. At Cedar Creek he commanded the Vermont Brigade and was brevetted brigadier-general for his gallant and distinguished services on this occasion, and in the last charge of the Sixth Corps upon Lee's lines before Petersburg, April 2nd, 1865, the gallant Foster was again in command of the brigade. His military services ended with the surrender of the Appomattox. General Foster was over six feet in height, well-proportioned, and a man of great muscular strength. No handsomer soldier than he ever stood in the ranks of the Vermont Brigade, as we remember him in the old fighting days, before increasing corpulence and disease had impaired his natural symmetry. Like most men of unusual physical power, he was one of the kindest and most genial of men; his good nature never failed him. In war or in peace, in peril or out of it, he was always the same cool, imperturbable man, always good natured and always gallant. Underneath his bland exterior he concealed a deal of sagacity, sly humor and resolution. His famous capture of the Fenian General O'Neil illustrates the nature of the man; his shrewdness and his prompt courage. General Foster was socially a great personal favorite, and so kind and tender a husband and father that the bitter bereavement of his wife and children is inexpressibly sorrowful to contemplate. Vermont has lost a stout soldier, who faced death and shed his blood for her honor without flinching, and all who have enjoyed his friendship will long miss him as a most genial gentleman and loyal friend. General Foster was appointed United States Marshal in 1869, on the death of Hon. Hugh Henry, of Chester, and has therefore held the office nearly ten years.