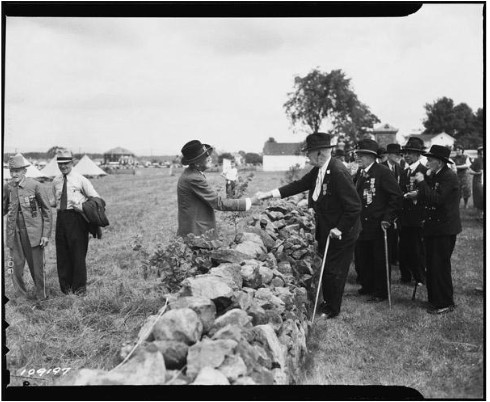 Zelora Marsh, a Civil War veteran, and father of Mrs. C. L. Erwin, has been invited to attend the commemoration of the 75th anniversary of the Battle of Gettysburg to be held June 29 to July 6 at Gettysburg. Mr. Marsh, who is 90 years of age, was born in Troy, Vt., and at the age of 14 enlisted in Co. D, 11th Vermont Volunteers and served three years in the Civil War engaging in several important battles. The past two Memorial Days in Ludlow he has had the honor of being the only war veteran present at the services and has been honored at the town hall. Mr. Marsh makes his home with his daughter, Mrs. J. B. Renahan, in Nashua, N. H., and often visits his daughter here in town so is well known.

Mr. Marsh's expenses will all be paid as will also C. L. Erwin's, as he will accompany Mr. Marsh. Mrs. Erwin will also go to Gettysburg. Every possible precaution will be taken to safeguard the health and life of the veterans on the trip so their health will not be impaired on so strenuous a journey for many of them. There are 33 Vermont Civil War veterans who plan to attend. Harry Powers of Lyndonville is the state commander. The Federal government has appropriated $900,000 to finance the celebration, and of the 12,000 living veterans, it is expected there will be around 2500 in attendance. Mr. Marsh and the Erwin's plan to leave here by June 26.

Webmaster's note: see the footnotes to the Wikipedia article on the reunion for a number of interesting stories about the reunion.