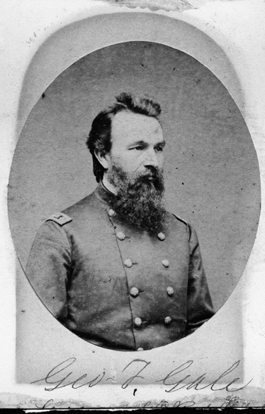 DR. GEORGE F. GALE DEAD.
Had Practiced in Brattleboro Nearly Half a Century

Brattleboro, April 15. - Dr. George F. Gale, aged 79 years, prominent in his profession as a physician and surgeon, died at his home on Green st., yesterday afternoon after an illness of one week. The funeral will be held at St. Michael’s Episcopal church at 2 o’clock Wednesday afternoon, the Rev. Edward T. Mathison officiating.

Doctor Gale was first surgeon of the Eighth Vermont regiment, serving from December, 1861, to June, 1862, when he resigned on account of illness. He went to Richmond after the battle of Gettysburg, responding to the call for additional surgeons.

Doctor Gale was born in Petersham, Mass., May 19, 1827. He attended Petersham Academy, Middlebury College, and in 1855 was graduated from the Berkshire Medical College in Pittsfield, Mass. Before that time he was in San Francisco one year, having charge of a smallpox hospital. He practiced in Cummington and Deerfield, Mass., and Jamesville, Wis., and came to Brattleboro in 1858. He practiced in Brattleboro longer than any other physician or surgeon who ever lived in town.

In 1849 Doctor Gale married Miss Vesta Richards Orcutt of Cummington, Mass. She died May 28, 1863. Doctor Gale is survived by two daughters, Miss Martha Clara Gale of this town, and Mary Holland, wife of George A. Briggs, of Claremont, N. H. Doctor gale was an authority in microscopical research so far as it related to his profession, and he formerly was called upon often for expert testimony. For more than thirty-six years he had kept a daily record of meteorological observations. He was a true sportsman and for many Vesta Richards Orcutt, of Cummington made regular trips to Moosehead lake, He was a charter member of Beaumont Commandery, Knights Templar, and a member of the Vermont Wheel Club. He was on the first board of bailiffs elected in Brattleboro.