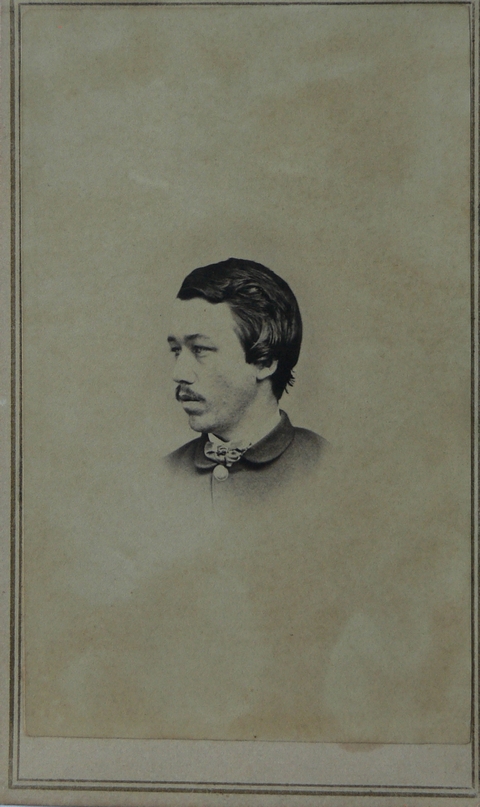 Of Revolutionary ancestry, his education was obtained in the common schools and the People's Academy of Morristown, at which academy he was prepared for Middlebury College, which he entered in the class of 1860. He remained in college till his junior year, when he enlisted in the Union army.

In December, 1863, he was mustered into the service as 1st sergeant of Co. C, 17th Regt. Vt. Vols., and participated in the battles of the Wilderness, Spotsylvania, and North Anna. He was then taken sick and sent to Campbell Hospital, and then to his home on furlough. To such a degree was he reduced by illness, that he was brought the whole way on a stretcher. At the expiration of his leave of absence, he went to the General Hospital at Montpelier and being convalescent was put in charge of the muster rolls at Sloan Hospital. He received an honorable discharge from the service in 1865.

Soon after leaving the army, Mr. Gates entered the drug store of J. C. Brigham of St. Johnsbury. In 1868 he removed to Morrisville and engaged in the same business, and built up an excellent trade, from which ill health compelled him to retire in 1893.

He was united in marriage, June 7, 1869, to Florence H., daughter of Col. Jonas and Delia (Prouty) Cutting, formerly of Stowe. Their children are: Lillian L. (Mrs. Hollis M. Chase), who was an adopted daughter, Henry Franklin (deceased), and Albert Oscar.

Mr. Gates is a Republican in his political predilections, and has been auditor of accounts fifteen years, member of the board of trustees of People's Academy and is one of the school directors of Morristown. He has served upon the Republican committee of the First District of Vermont and been appointed chief of staff of Governor Fuller with the rank of colonel.

Colonel Gates has for thirty years been affiliated with Free Masonry, during which period he has belonged to Mt. Vernon Lodge. He was a charter member of J. M. Warren Post, No. 4, GAR, Morrisville, has held the position of adjutant and for three years been its commander. He has been for two years inspector of department of Vermont and twice has been honored with the office of delegate to the national encampment.

At an early hour last Sunday morning, following a long period of illness, came the death of one of Morrisville's esteemed citizens, who for nearly 30 years has been so closly allied with the general interests of the community in which he was born and lived.

Amasa O. Gates was born in Morristown, April 24, 1842, the son of Daniel F. and Lavina Jordan Gates. Graduating from Peoples Academy in the early summer of 1860, he entered Middlebury College the same year and took up the regular college course, which was interrupted in his junior year when, like many another young collegian, responded to his country's call and left the class room for the field of battle.

He enlisted in the service on Dec. 1,1863, and was mustered into service as First Sergeant of Company C 17th Vermont Regiment Vermont Volunteers Jan 22, 1864, and with his company very soon participated in the battles of the Wilderness and Spottsylvania, without previous experience or drill. Suffering from much sickness he was sent to Campbell Hospital in Washington, D.C., and later sent to Vermont on a 30 day furlough, riding all the way on a stretcher placed on the top of car seats. He was transferred to the Veterans Reserve Corps in Feb, 1865, and was mustered out of the service at Montpelier May 28th of that year.

In June, 1869 he married Florence H., daughter of Col. Jonas Cutting formerly of Stowe, who survives him, together with an adopted daughter Mrs. H.C. Chase of Chicago, and a son Oscar Gates.

Col. Gates was a charter member of J. M. Warner Post no. 4, G.A.R., had been for 30 years a member Mount Vernon Lodge of Masons, served upon the First Cogressional District Republican Committee for some time, and was made chief of staff, with rank of Colonel, by Gov. Fuller.

He always envinced a peculiar interest in educational matters in this, his native town, and had given valuable service in that connection.

The funeral services were held on Tuesday afternoon, with prayer at the residence on Park Street, followed at 1:30 by the public services in the Universalist Church, of which church organization the deceased had long been a member, and for many years its Sunday school Superintendent. Prayer was offered by U. N. Kellogg of the Cong'l Church, and brief appropriate remarks were made by I. P. Booth,D.D., the pastor. Beautiful floral decorations were brought by many friends and organizations. Post J. M. Warner, No. 4, G.A.R., and Mount Vernon Lodge, No. 8, F &A.M. attended in large numbers, and participated in the service.

As a mark of respect to the memory of the deceased all business places were closed during the funeral, and students of the Academy department in which Col. Gates had taken such lively interest adjourned and attended.

The interment was in Pleasant View Cemetery.