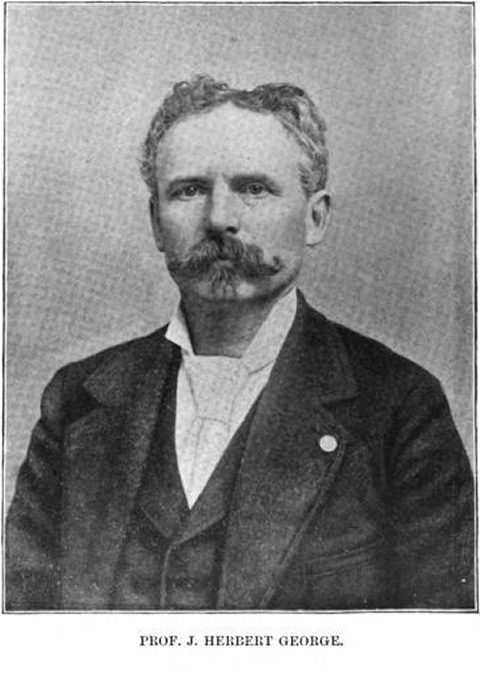 James Herbert George was the youngest of four brothers who enlisted in the Tenth Regiment and were members of Co. G. Three of them, Charles H., Jere N., and J. Herbert, went through the war and lived to be mustered out at its close, and one, Osman C. B., died of disease after having served a year and four months. Three of them enlisted from Newbury, Vt., but James Herbert was a telegraph operator at Greenfield, Mass., previous to and during the first year of the war, and probably was thought to be too young to enter the army. But about the time the regiment reached Brattleboro, Herbert made a visit to his brothers there in camp; while there he was seized with an ardent desire to "go with the boys," and he enlisted as fifer in the company where is brothers were--Captain George B. Damon's.

At that time there were no provisions for other than company musicians in our volunteer army, and authority for enlisting regimental bands having been suspended or withdrawn altogether. Consequently, the highest musical functionary that accompanied the Tenth regiment to the field was a much belaced and batoned Drum Major. Our Drum Major was a pleasant gentleman, Mr. Russell Fisk, and belonged to non-commissioned staff. But it finally turned out that no authority for such an officer existed, and Drum Major Fisk was discharged, Jan. 8th, 1863. Still, while he remained there was an attempt made to organize the company musicians into a fife and drum corps, and young George was appointed Sergeant Fifer of his corp if there is such an anomalous position. However, this may be, later on he was appointed Principal Musician and was allowed to organize a band from among those who had enlisted as fifers and drummers, and also to have detailed from the ranks a sufficient number of men of suitable qualifications to complete a band organization. Instruments were procured, the money for them being quickly subscribed by the music lovers of the regiment and in an amazingly short time, Principal Musician George, who had now become Band Master, was prepared to enliven the camp with strains of music that seemed to come from home.

George was an excellent musician. He had mastered several instruments and played the B flat cornet in the Newbury brass band when he was fifteen years of age. He was now capable of giving general instruction on each instrument in the regimental band. He was also an enthusiastic leader; so the band prospered, was often in requisition at corps and division headquarters, and with General W. H. Morris, a fine musician himself, commander of our brigade for some time, George was a favorite and he received great benefit from the General's kind and critical suggestions. This ban was also employed at grand reviews and at dress parade; played in camp at funerals of our dead comrades, enlivened the weary steps of marching columns, and around bivouac fires, tired soldiers went to sleep with familiar strains of music floating over them. The band continued in working existence, through some vicissitudes it is true, until the surrender at Appomattox, when it was the first within hearing to salute the redeemed flag of our country with the thrilling measures of the Star Spangled Banner. The old band, now loved and revered, returned to Vermont with the regiment and played their last tune together -- "Home Again" -- on their arrival at Burlington.

The personnel of the band, furnished by the leader, Mr. George, with other interesting matter for this sketch is as follows, although all were not members at the same time:


Munsell was a thorough musician, George observes and acknowledges great assistance from him in keeping up the band. N. M. Puffer was universally conceded to be the best band snare drummer in the Army of the Potomac, and De Witt B. Sexton could "beat the world beating the bass drum." He could whistle the medley to every tune the band played, about one hundred and fifty selections. Dick Moon was "old reliable" on the bass. Who does not remember his voice as he sang "Rocked in the Cradle of the Deep?" E. J. Foster, one of the youngest soldiers in the regiment, who apparently would endure more than any man, was a good drummer and an excellent alto soloist. Others could be spoken of with equal praise. They were all good musicians--picked from a thousand.

Sickness and death sometimes interfered with but never killed the band. Garvin was captured at Monocacy, taken to Danville, Va., and exchanged just in time to die of the ill treatment received while in the hands of the enemy. Dan Barker became exhausted in the retreat from Monocacy and died in Baltimore, soon after. O. C. B. George died in Washington in December, 1863; L. M. Kent and J. N. George have died since the war; Hamilton is a dentist in Richford, Vt.,; C. H.George is a North Dakota farmer; Goldsmith is at Weathersfield, Vt.; Will Clark at Barre; Wells at Burlington, and Dick Moon at New Britain, Conn. There are three others beside Mr. George who were members, about whom we can speak more at length. The following sketch of E. J. Foster will be of interest to his surviving associates:

E. J. Foster, brother of L. R. Foster, Jr., enlisted from Moretown, as drummer of Co. B, at the age of fifteen. He was small, slight and fair, and much like a little girl, which gave him the sobriquet of "Little Nellie," or "the daughter of the regiment." He was one of the youngest who went into the war and was a bet among the men. He was of a sunny nature and his face with wreathed with smiles. As the company lay at Conrad's Ferry, in the spring of 1863, the Surgeon thought because of his youthfulness, his aesthetic nature, and slight indisposition, that he had better be sent back to the hospital. But the men desiring to keep him with them gave him a frightful picture of hospital life and made him such good promises that he afterward eschewed the Surgeons and remained with the regiment until it was mustered out of service. With the exception of a short furlough to his home in Vermont, the last spring of the war, he was never absent from the regiment during its term of service. After the organization of the regimental band, he being of a naturally musical turn of mind, was taken into that and given an alto horn, upon which he improved in playing until he was given the solo part to play. He still has in his possession the "solo-alto horn" given him by the regiment, which he cherishes with fond memory. He continued the study and practice of music after relegation to citizenship and became more than an ordinary performer on the organ and piano. He also cultivated his voice for singing. He resumed his studies at school, which he continued until he took up the study of medicine. He was drilled to some extent in allopathy and was graduated from the Homeopathic College in Philadelphia, from which he received the title of M. D. Some time afterwards he graduated from the Massachusetts Medical College and received the degree of C. S. D. In November 1888, he was adopted legally, according to the law of Massachusetts, by the Rev. Mary B. G. Eddy of Boston, and Eddy was added to his former name, so that in Boston he is known by the name of Dr. E. J. Foster Eddy.

His own mother died when he was about twelve years of age. His mother by adoption and he have two beautiful homes; one on Commonwealth Avenue, Boston, and a country residence in Concord, N.H. He has been especially favored and his lot is an enviable one.

Norman M. Puffer was another of the younger and one of the youngest soldiers in the regiment. His age and that of Foster Eddy's was about the same, having both been born in the same year, although he entered the army a year earlier than Foster, having enlisted as a drummer in the Second Vermont Regiment, sometime in June, 1861. He was discharged in the following December, the band having been discharged at that time in pursuance of a general order from the War Department, discontinuing the enlistment of regimental bands and discharging a certain number of those already in existence. In the following year, July 19th, 1862, Puffer reenlisted as one of the musicians of Co. E, Tenth Regiment. He served with this regiment until Sept. 30th, 1864, when he was transferred to the veteran reserve corps and mustered out June 29th, 1865. He was a bright, active young man, brave, efficient and useful. It may here be said that the musicians of the regiment during an action were employed in the very important and dangerous service of carrying the wounded from the battlefield, a service which was attended by great exposure, and not unfrequently required daring courage and resulted in deeds of heroism. Since the war Mr. Puffer has resided in Bennington. In 1872 he entered the employ of Major A. B. Valentine, and in 1884 he became a member of the "Valentine Knitting Co.," but in 1887 withdrew, selling out his interesting, and established, with a partner, the "Bennington Knitting Company," and has since, with his associate, conducted a prosperous business under the last mentioned firm name.

De Witt B. Sexton enlisted from St. Albans, Aug. 5th, 1862, and became a member of Co. I, and as such he went to the front, carried his musket and knapsack until sometime in June, 1863, when he was detailed to the band, just then being organized by Herbert George. Although a mere boy, De Witt was known to his friends as "Sexton," or more frequently as "Sex." It might e said that he was thus known to nearly everyone, for everybody seemed to know him and he appeared to known not only every one he met, but all that was going on within the Union lines. He was one of the most enterprising, social, jovial and kind hearted of men. He would go a great way and sacrifice much for a friend; and as he was oftentimes employed with all the members of the band in removing and assisting the wounded from the battlefield, he would freely expose himself to danger in order to help a disable comrade beyond the deadly fringe of battle. His spirits never flagged and he was always ready for fun or serious work. He was the life of the band on tiresome marches and around its bivouac fires, as well as one of its most skillful musicians, having joined it on its organization, and continued with it to the end. Since the war, he has been for the most of the time in the service of the Central Vermont Railroad Col., and is at present a conductor on the road running between Rutland and Bellows Falls.

James Herbert George, the efficient band master, by whose energy it was created and in great part sustained, was well-fitted for the work he did. He was skilled in the use of all the instruments employed in the band, and after overcoming many of the difficulties incident to the selection and training of such an organization, he had the satisfaction of knowing they were successful and duly appreciated. He was no less bravely devoted to his duties of removing and caring for the wounded in time of action. Since the war he has followed music as a profession and has been successful and popular as a teacher and conductor of music. He is at present Supervisor of Music in the city schools of Norwich, Conn.

Letters of James Herbert George, 1862-1865 are at the Huntington Library, San Marino, CA