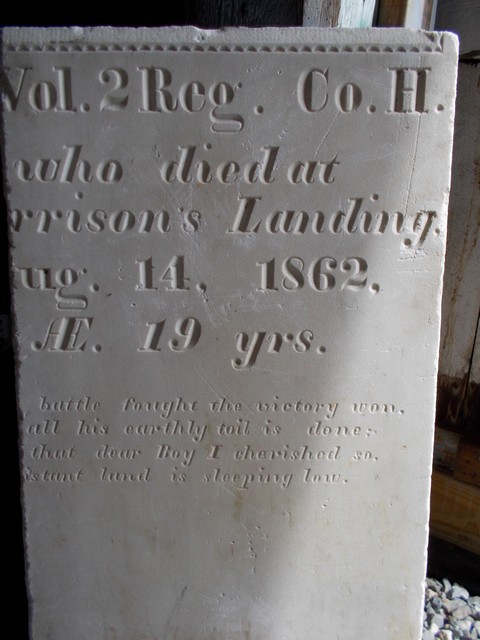 This cenotaph was originally erected in memory of a young Cambridge soldier, Joseph W. Morton, who died at the age of 19 on Aug. 14, 1862 and was buried at Harrison Landing, VA. Before enlisting Joseph was working as a farm laborer and living with Amasa and Mary Thompson, and was most likely working for them on their farm. He enlisted on May 7, 1861, mustered in on June 20, 1861 as a Private in Co. H, 2nd VT Infantry. His Company fought in the First Battle of Bull Run and throughout the Peninsula Campaign.

According to a letter dated Aug 20, 1862 by Lieutenant Chester K Leach of Fletcher, Joseph died of a sore throat (according Morton's G A R record, he had contracted diphtheria).

"It is a very pleasant morning as nearly all of the weather has been lately. I was very sorry to hear in your letter that Sergeant Ellenwood is dead & never reached home.

The Thursday night before we left camp at Harrisons Landing, Joseph Morton died, (he was from Cambridge) of a sore throat. We expected to start the next morning & we made a box and dug a grave & buried him at night. I have read of midnight burials but never attended one before. I suppose his body will rest all the same."

After the Civil War ended there was a large effort to recover the bodies of Union soldiers and rebury them at home or in the national cemeteries. Joseph Morton now appears to have a proper grave in Mountain View Cemetery, Cambridge. Once Joseph was brought home this cenotaph would have been removed, and in typical Yankee fashion, this stone looks to have served some other purpose for the last 150 years ... a walkway stone, basement flooring, a threshold.... It was found in a garage in Cambridge Village.