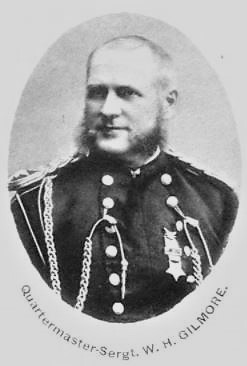 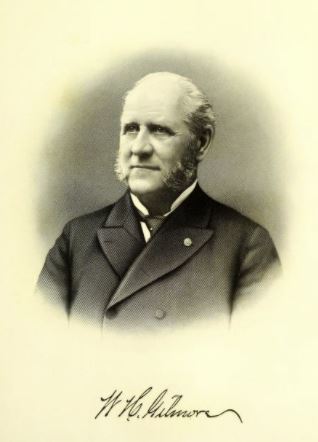 GEN. GILMORE DEAD THIS MORNING OF PNEUMONIA
At Hotel in Bellows Falls Where He Was Taken Ill
______

A telephone message to Col. Hannon this forenoon from Bellows Falls announced the death there this morning of Gen. W.H. Gilmore, for many years adjutant and inspector general of the state of Vermont.

Gen. Gilmore was taken ill at Bellows Falls while there on business in one of the hotels. For several days he has been failing and since Saturday hope had been practically abandoned. The funeral will be held at Bradford Wednesday afternoon.

William H. Gilmore of Fairlee, Republican; born in Fairlee October 17, 1839; occupation, a farmer; educated at New London Academy; was a member of Company D, 8th Vermont Volunteers and was promoted to quartermaster-sergeant of that regiment; was a member of the House of Representatives in 1878 and of the Senate in 1882; has held the usual town offices and has been town treasurer of Fairlee for twenty-five years; was elected biennially since; in September, 1900, was appointed adjutant and inspector general, ex-officio quartermaster general and has been reelected by each general assembly since.

A long and distinguished career closed when General William Harrison Gilmore, aged 71, died at Bellows Falls at 5:20 o'clock on Monday morning, after an illness of four weeks. Death resulted from complication of diseases, a threatened attack of pneumonia being followed by a partial stroke of paralysis and a kidney ailment.

On March 21, General Gilmore came in company with Capt. E. B. Goss, U. S. A., for the annual inspection of Company E, Vermont National Guard and feeling unwell he remained in his room at the hotel and did not participate in the inspection. He was unable to leave the bed the next day and his condition become such that his family was sent for, his wife arriving on the third day of his illness. The daughter, Mrs. H. B. Chamberlain of Fort Morgan, Ala., and the son, Alexander H. Gilmore of Macon, Ga., came here on Monday of last week. During the past week the condition of the general became alarmingly worse and from Friday his death was hourly expected. He was unable to receive nourishment Sunday and late Sunday evening the tremendous vitality of the general was forced to give way, death coming on slowly in the watches of the early morning.

William Harrison Gilmore was born at Fairlee, Vermont, on October 17, 1839, and was the son of Judge Alexander H. Gilmore. He was educated in New London academy. He was married to Mary T. Haselton, daughter of Colonel John Haselton of Orford, N.H. He enlisted in the Civil war as a member of Company D, 8th Vermont Volunteers, and became quartermaster sergeant of the regiment. After the war he engaged in farming in Fairlee. General Gilmore was town treasurer of his native town for 29 years and represented his town in the House of Representatives from 1878 to 1882., and also represented his county in the senate. He was a member of the staff of Ex-Governor John S. Barstow and several times had refused gubernatorial honors. In 1886 he was elected Quartermaster general of Vermont and has been biennially re-elected ever since; was appointed Adjutant and Inspector General in September, 1900, and in November of the same year he was elected by the General Assembly to the same office and has been re-elected by each General Assembly since. His winters for the past few years have been spent at Bradford, where he was president of the Bradford National bank, and his summers in Birchmire cottage on the western shores of Lake Morey. He was a member of Washburn Post, G.A.R., of Bradford. He is survived by his wife, Mrs. Mary T. Gilmore, a daughter, Mrs. H. B., wife of Capt. H. B. Chamberlain, U. S. A., Ft. Morgan, Ala., a son, Alexander H. Gilmore, the well known southern journalist, now managing editor of the Macon, Ga., Telegraph and a brother, James W. Gilmore, a sheep raiser in Glendive, Mont.

General N. G. Williams took charge of the funeral arrangements in Bellows Falls and at 11:30 Monday morning services were held in the parlor of the Hotel Windham, at which Rev. A. P. Pratt, Ph. D., pastor of the Congregational church, officiated. The village and town officials and many of the representative men of the town attended the services.

After the services the body was conveyed to the depot, under escort of a detail of 21 officers and men of Company E, to await the Bradford train. Preceding the hearse was an honorary guard of eight members of E. H. Stoughton Post, G.A.R. The bearers were J. J. Fenton, J. C. Day, C. E. Howard, H. D. Ryder, C. W. Osgood and F. G. Pierce. Funeral services were held at Bradford yesterday at 1 p.m.