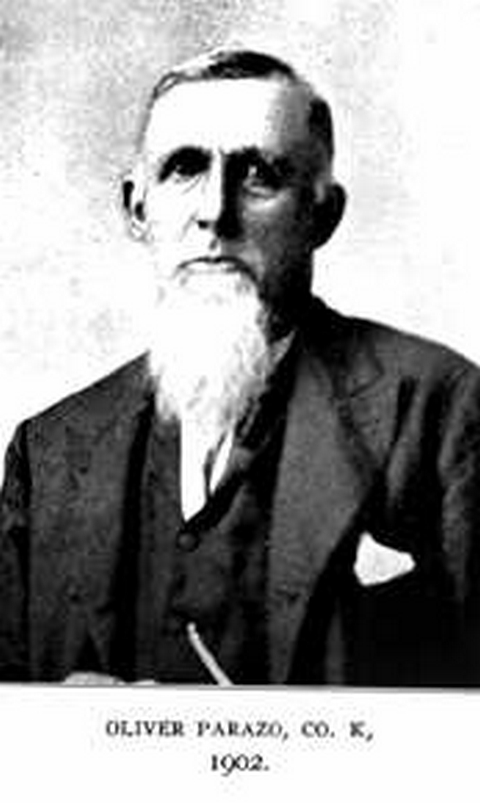 OLIVER PARAZO volunteered from the town of Swanton about September 10th, 1862, and joined the Highgate company on the 11th day of September, the time of the organization of the company. His age was 31, was a married man, and by occupation a farmer. He was born in Canada, but came with his parents to Swanton when a child, and had always lived in Swanton and there married for his first wife a Miss Greeno, belonging to an old time, highly respected family. Oliver from youth up to manhood had so lived as to command the good opinion of all classes. He was an honest, reliable and upright citizen, and conscientious in all his doings. He tried to be just to all and likely succeeded as well as any. At the date of enlistment he was considered honorable and courageous, and of the kind best adapted to the exacting life of a soldier. In as much as a sketch of Oliver Parazo, written by his true and lifelong friend, Stephen F. Brown, appears on page See Roster, and his face on page 413, what I would otherwise say of him will be at this time mostly omitted. My acquaintance with Oliver, living in the same village and meeting him nearly every day and being a comrade in the same company, gave me more intimate knowledge of his true character than others could possibly have. A pension was granted him soon after the war on account of a rupture and other injuries received in the battle of Gettysburg. The generous act of his government came at a time when needed, and no man ever appreciated it more. He was as loyal in civil life as he was brave in battle. He was mustered out with his regiment at Brattleboro, Vt., July 21st, 1863, and took the first train home where he well knew an affectionate welcome of loving wife and children anxiously waited his coming. The rest of his life was in Swanton, except a brief stay in Massachusetts. His days, though a life long sufferer by reason of injuries received at Gettysburg, were comparatively happy and cheerful. Was content and thankful his injuries, pain and suffering was because of service to his country. His life was honorable and he enjoyed the respect of all, and is now missed. His comrades who knew him best deplore his loss most. I saw him on his death bed during the last hours of his consciousness; he realized that death was near at hand, and felt that he was prepared, and he met the last days of his life, and welcomed it with the same undaunted courage and heroic bravery that he evinced in battle. He lived not in vain, for in a single hour in meeting Pickett's desperate and gallant charge, did more for his government and country than many a distinguished citizen in a life time, in the higher walks of life. Oliver Parazo died April 3rd, 1908, and was buried beside his first wife in the Catholic cemetery of Swanton. The survivors of his company and many other old soldiers stood about his grave, their eyes dimmed with tears as the last solemn rites were performed. A comrade raised the flag he loved so well above his grave, and we sorrowfully left him, thinking it would be but a little while when we would surely meet him again.

Oliver Parizo, a Civil War veteran, died at his home here Friday morning at 7 o'clock. He was a member of Co. K, 13th Vt. Vols. his service terminating in the battle of Gettysburg, in which he was struck by a piece of a shell and received internal injuries, from which he never recovered, suffering ever afterwards with double inguinial hernia. He was a brave soldier and a good citizen. He leaves a wife and several grown up children by his first wife.