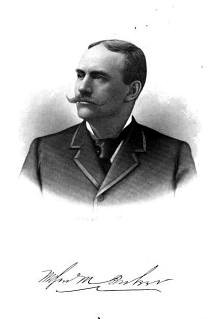 Young Parker was preparing for college at the breaking out of the war, when he left school and enlisted in the 1st Vt. Cavalry, with which command he served until the close of the war, and his record as a soldier is one of the most brilliant. He located in Washington, and in 1865 he received an appointment in the War Department, where he served several years.

In 1876 he graduated from the law department of the Columbian University, and has ever since taken a lively interest in that institution, donating annually to the postgraduate class the "Myron M. Parker" prize. In 1879 he was appointed assistant postmaster of the city of Washington. He was secretary of the Washington committee on the ceremonies incident to the laying of the corner stone of the Yorktown monument. He was grand master of Masons in 1884-'85 and officiated as such at the dedication of the Washington monument. He was chairman of the triennial committee to receive and entertain the Grand Encampment Knights Templar of the United States at its twenty-fourth conclave held in Washington. He is the grand representative of the Grand Lodge of Ireland and the Grand Lodges of Pennsylvania, Virginia and Delaware. He was a member of the executive committee having in charge the inauguration of President Garfield, and was vice chairman of the inaugural committee for President Harrison; he was also chairman of the committee on civic organizations, and was marshal of the fifth division in the inaugural parade. At the second inauguration of President Cleveland he was a member of the citizens' committee, and was a special aid on the staff of General McMahon, the chief marshal.

Like nearly all Vermonters Mr. Parker is a Republican, and during the second campaign of President Harrison was appointed on the advisory committee of the national committee.

He has always been interested in the advancement of Washington and has taken a leading part in all public enterprises, contributing largely of his time and means. He was one of the promoters of the proposed constitutional convention in 1889, the World's Columbian Exposition in 1892, and was one of the three selected to present the claims of Washington before the committee of Congress. He is secretary of the Washington Memorial Association.

Mr. Parker has been an enthusiastic exponent and believer in the future greatness of Washington, and has been closely identified with her growth. In 1880 he actively engaged in the real estate business, meeting with great success, his annual transactions running into the millions, and in which he has massed a fortune. He has been identified with many of the financial institutions. He is also a director in the Columbia National Bank, the American Security and Trust Co., the Columbia Fire Insurance Co., the Columbia Title Insurance Co., the Eckington and Soldiers Home R. R., the Atlantic Building Co. and the United States Electric Light Co. He was vice-president of the Brightwood R. R., and in charitable institutions is a director in the Washington Hospital for Foundlings, the Training School for Nurses, and the Emergency Hospital. He was one of the organizers of the Washington Board of Trade, and for several years was its president.

In 1876 he married Miss Nellie L. Griswold. They have four children, three girls and one boy, and reside on Vermont avenue.

Mr. Parker retains all his old time affection and loyalty to his native state, has always retained interests there, and pays annual visits to his home in Cambridge, where his mother and only brother and sister reside.

Mr. Parker was appointed by Governor Fuller a delegate at large to the National Ship Canal Convention in 1893.

Washington, March 25 (AP) - Myron M. Parker who was in Ford's theatre the night Abraham Lincoln was assassinated and has been prominent in local civic activities for more than fifty years is dead at the age of eighty-two.

In 1885 he as in charge of the Masonic ceremonies at the dedication of the Washington monument and subsequently he was a member of the commission which went to Cuba to investigate and report on the incidents which led up to the Spanish-American war.

Born in Fairfax, Vt., Mr. Parker's great-grandfather fought in the Revolutionary war and his grandfathers both fought in the War of 1812. He enlisted in the First Vermont cavalry in 1863 and war department records show he fought bravely in many Civil war battles. Thrice his horse was shot from under him.

Before being mustered out in 1865, he had served as orderly both to Gen. George A. Custer and Maj. Gen. Winfield Scott Hancock. He was at one time a commissioner for the District of Columbia, served twice as republican national committeeman from here and was a member of the inaugural committees Presidents Garfield, Cleveland and Harrison.