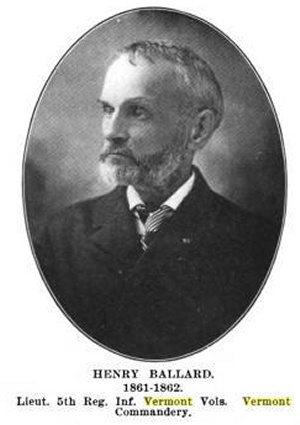 His early education was obtained in Tinmouth and at Castleton Seminary, and immediately after his preparatory studies he entered the University of Vermont, from which he graduated with high honors in the class of 1861, having been selected to deliver the master's oration at the college commencement three years later.

In September, 1862, he became a student in the Albany (N. Y.) Law School and he graduated from that institution in May, 1863, and at the time of his graduation the Hon. Amos Dean, the founder and dean of the school, said of him that he was one of the best students that ever was graduated from that institution. He at that time gave promise of what he has since been noted for-a popular and successful advocate.

After his graduation, in 1863, he at once entered the office of Daniel Roberts, Esq., of Burlington, and there remained until he was admitted to the bar in September, 1863, when he opened an office in that city, where he has resided ever since. In 1864 he was admitted to practice in the United States district and circuit courts.

Mr. Ballard has obtained a well-earned distinction in the practice of his profession, and while he has the reputation of being one of the best criminal lawyers in the state, he has also been equally successful in the trial of civil cases. He is emphatically a trial lawyer and as a jury advocate he stands among the best. His practice has not been confined to his own locality but has extended into many counties in the state. Among the notable cases in which he has been engaged are the celebrated crim. con. case of Shackett against Hammond in Addison county; the National Bank of Brandon against John A. Conant et als, a suit to recover $125, 000 lost by reason of alleged forgeries; the Rutland Railroad Co. against ex-Governor John B. Page, noted as the longest jury trial ever had in New England, lasting nine weeks; the cases that arose out of the Hartford bridge accident against the Central Vermont Railroad Co.; the slander case of Lizzie J. Currier against J. B. Richardson in Windsor county; State against Edwin C. Hayden for the murder of his wife at Derby Line; and State against Smith for the murder of his wife by poison at Vergennes. He is an effective speaker on political subjects, and since 1868 his services on the stump have always been in demand during political campaigns, not only in Vermont, but in New York, New Hampshire and Massachusetts. He has sometimes made as many as one hundred speeches in a single campaign. He is a ready speaker upon all occasions and he has frequently appeared upon the lecture platform.

Soon after the commencement of the civil war in the summer of 1861, and immediately after his graduation from college, Mr. Ballard enlisted as a private and was mustered into service as 2d lieutenant of Co. I, 5th Vt. Vols., and served with this regiment through the Peninsula campaign, being present at the battles of Lee's Mills, Williamsburg and the seven days' fight before Richmond, but he was obliged to resign in July, 1862, on account of ill health.

Mr. Ballard belongs to the Republican party, and was elected to the state Senate from Chittenden county in 1878-'79, serving on the committees of judiciary, state prison, and federal relations. In 1888-'89, he represented the city of Burlington in the lower branch of the Legislature and did effective service on the judiciary and general committees, of which last body he was the chairman. He has been city attorney of Burlington for two years. In 1884 he was a delegate to the Republican national convention at Chicago, where he was chairman of the important committee on credentials. There were forty-five cases of contested delegates' seats before the committee and much credit was given to him for the manner in which he acquitted himself in that responsible and difficult position. He was one of the reading clerks at the Republican national convention in 1888.

In religious belief he is an Episcopalian, and he takes an active interest in the Young Men's Christian Association.

He was united in marriage, Dec. 15, 1863, to Annie J., daughter of Robert and Huldah (Bailey) Scott of Burlington, and he has four children: Kate (Mrs. James B. Henderson of Burlington), Frank Scott, Mary E., and Maude.