CASE 282. Corporal John N. Payne, 5th Vermont, aged 34 years, in the general assault on Petersburg, April 2, 1865, near Fort Welch, received a shot wound of the abdomen, and was taken to the 2d division hospital of the Sixth Corps, under charge of Surgeon S. F. Chapin, 139th Pennsylvania, when the injury was registered as a "gunshot flesh wound of the abdomen." On April 11th, the patient was transferred to the depot field hospital of the Sixth Corps, under Assistant Surgeon J. S. Ely, U.S.V., who recorded the injury as a "gunshot flesh wound of the left side." On April 12th, the wounded man was sent to Washington and placed in Harewood Hospital. Surgeon R. B. Bontecou, U.S.V., reports that "a musket ball entered over the left hypochondriac region, passed obliquely downward and backward, and emerged near the spine, injuring, in its course, the descending colon; feces passed artificially at the exit of the ball. Simple dressings." A photograph of the patient was made under Dr. Bontecou's direction. A reduced copy of this picture is presented in the accompanying wood-cut (FIG. 60). In a few weeks the wound healed entirely, and the patient was transferred to Vermont, May 26th, and admitted into Baxter Hospital, Burlington, on the 30th. On June 29th, he was transferred to Sloan Hospital, Montpelier, where Surgeon Henry Janes, U.S.V., reviewing the history of the case, remarks: "The ball entered four inches from the median line, between the tenth and eleventh ribs on the left side, passed backward and downward and emerged behind, one inch above the crest of the ilium and two inches from the spine. The patient states that the shock was not great, and that he walked, without assistance, a half mile to the ambulance, which conveyed him about two and one-half miles to the field hospital. On the next day, he was taken about seventeen miles to the base hospital at City Point, where he remained seven days. While there, a considerable quantity of foreign substance, mostly shreds of clothing, was removed from the posterior wound. On April 10th, he was transferred to Harewood Hospital, Washington. On April 13th, after taking cathartic pills, other fragments of clothing were removed from the posterior wound. April 14th, there was a stercoraceous discharge from the posterior wound. For the succeeding three weeks, the descending colon was kept under the influence of opium. The fecal discharge then ceased, but intestinal gases escaped for several days longer. He had some colicky pains; but not much tenderness, and no vomiting. His appetite was pretty fair most of the time. On May 25th, he was transferred to Burlington. The posterior wound closed early in June; the anterior opening healed a month later. On June 29th, he was transferred to Sloan Hospital, Montpelier, since which time he has had a variable appetite and constipation; otherwise he is in fair health. July 25th, he complains of some lameness along the course of the spine; passages from the bowels regular, appetite good, and patient gaining daily. These particulars are recorded on the back of a photograph made at Sloan Hospital. Payne was discharged from service September 8, 1865, and was pensioned. June 18, 1867, Pension Examiner Marcus O. Porter of Middlebury, New York, reports: "A rifle ball entered just below the left nipple, between the tenth and eleventh ribs, passed backward and downward, and emerged three inches lower than the point of entrance. The intestines were penetrated and fecal matter passed out of the wound for three or four weeks. An adhesion of the intestines appears to have been formed to the abdominal wall at the point of exit of the ball. He is entirely unable to perform manual labor on account of weakness of the right side, and the pain and soreness excited by muscular effort." He was last paid to December 4, 1872. 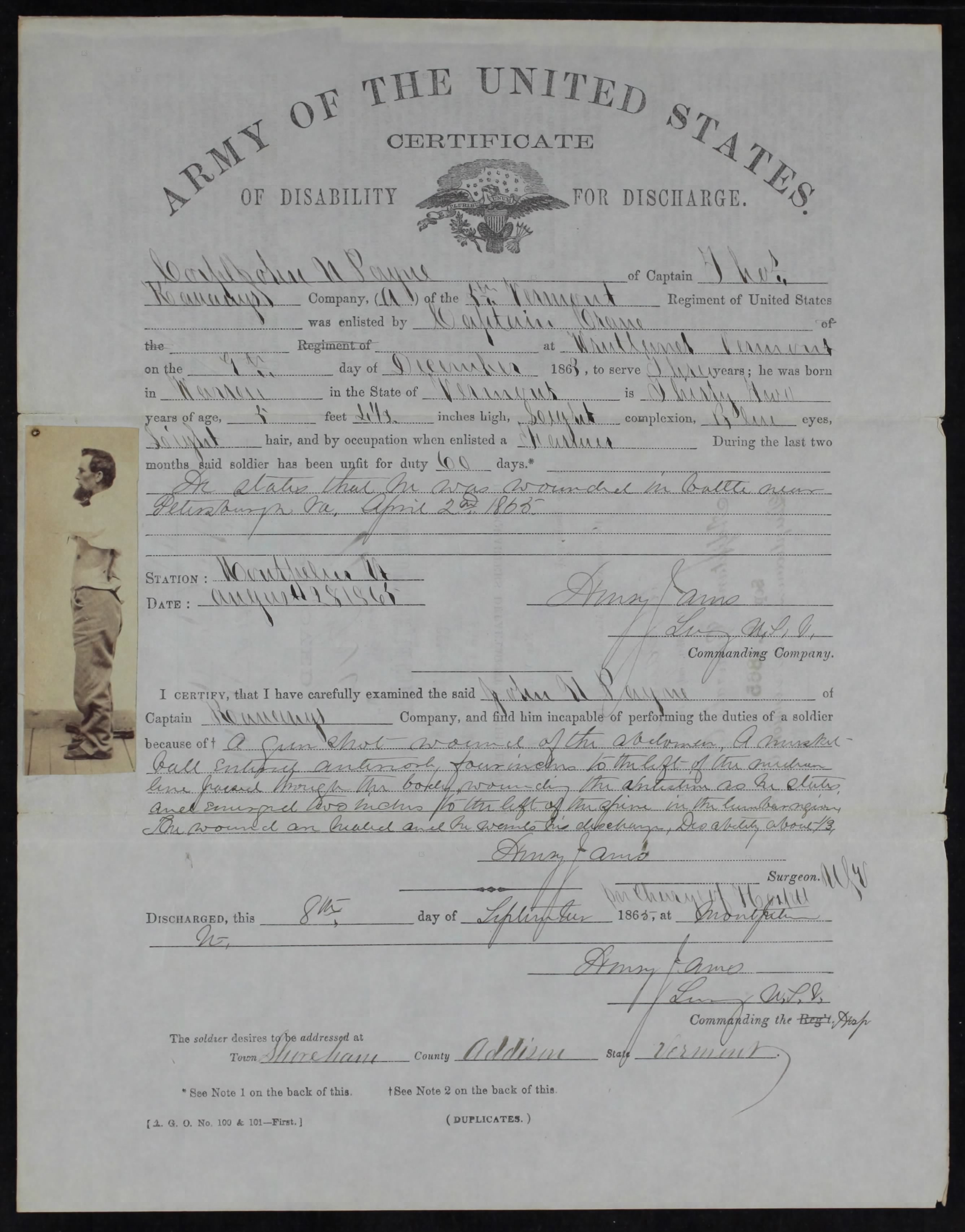