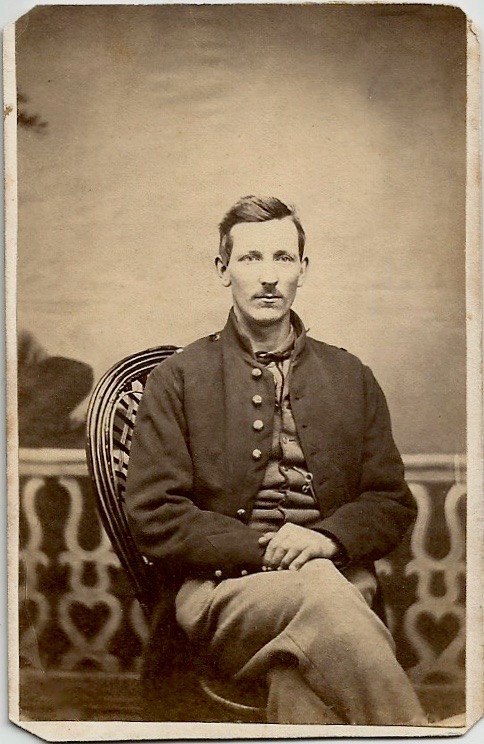 Albert W. Perry started life out just like hundreds of other newborn Vermonters in the 1840's. He was delivered to a farm family in or near Leicester, Vermont on the twenty-first of August, 1839. His father's name was William Perry and his mother's name was Susan.[1] Albert was still living in Leicester when the 1850 Federal Census was taken. The family now consisted of William, Susan, daughter Helen (age twenty-five), son Albert (age ten) and grandma, Polly Oliver (age seventy-eight.[2] By 1860, the whole family, minus Helen, had moved west to Plymouth, Montgomery, Pennsylvania. William Perry had traded his Addison County, Champlain Valley farm for a new one in the Wyoming Valley in Montgomery County, Pennsylvania.[3]

Plymouth was a developing borough located four miles west of Wilkes-Barre on the Susquehanna River in northeastern Pennsylvania. Prior to 1866, it was part of Plymouth Township, established in 1769 by the Susquehanna Company and claimed by Connecticut based on that colonies original charter. This company was a land development agency representing Connecticut and seeking to lay claims to the fertile lands along the Susquehanna River. As America expanded westward, both Connecticut and Pennsylvania claimed this basin. It wasn't until 1782, after a formal trial was held on the dispute, that Pennsylvania's claim was upheld. As it turned out, Plymouth's real cash cow was not its rich farmlands, but the anthracite coal beds that lay beneath it. This coal was first mined in small amounts in 1807. The mining operations grew in size, especially after the railroads came in 1852. It was after that that the small agricultural village began rapidly expanding into a mining town.[4]

However, mining did not entice William to alter his method of making a living. He bought farmland in Pennsylvania and turned it into a very profitable investment for himself and his family. His farm back in Vermont had been valued at $4,000. The assessed value of his Pennsylvania property amounted to $9,000. Obviously, William could not have doubled his wealth without the assistance of his nineteen year old son, Albert. This dependency on his labor may be what kept Albert at home even after the Civil War broke out in April of 1861. Albert waited two years and eight months before he enlisted. You might assume that he went for Plymouth, Pennsylvania and became a member of a regiment from that state. You would be wrong! For some reason, only really known to Albert, he came back to the place of his birth and enlisted for Leicester, Vermont on December 1, 1863 for three years. He was placed in Company C, 1 Reg't Vermont H. Art'y. He was twenty-four years old and a farmer by trade. He stood an impressive six feet tall which put him into the Lincoln category. He had light hair and blue eyes which must have only increased his attractiveness to the young ladies around him in two states.[5]

A week after signing his enlistment papers, Albert was mustered into the US service on December 8, 1863.[6] He was in Brattleboro, Vermont on December 14, 1863 where he collected $35 in bounty from the commutation fund and another $25 bounty money from the Government.[7] The Company Muster Roll for Nov/Dec, 1863 listed Albert "present" and owed $40 in bounty.[8] The First Vermont Heavy Artillery Regiment started out its service in the defenses ringing Washington, D.C. A year before Albert joined the First Heavy Artillery Regiment, it had been renamed. On December 11, 1862, it was given the designation the Eleventh Vermont Infantry Regiment. When Albert joined the Regiment, it was manning the walls of Fort Stevens as part of the defenses around the Capital. The entire Regiment, as the Eleventh, was ordered to join the Army of The Potomac on May 12, 1864. The Regiment took part in the engagements of Spotsylvania Court House, North Anna River and Totopotomy throughout the month of May. On June 1-12, 1864, the Eleventh was engaged in the fighting at Cold Harbor, Virginia.[9] Albert's term of enlistment was about to expire. His life as a soldier was brief, but not so short that he didn't accomplish a few things. According to the Company Muster Roll for Jan/Feb, 1864, Albert was due the second installment of bounty in the amount of $40. However, he owed a sutler by the name of Evans $4.[10] Between March/April of 1864, he managed to lose one haversack and one canteen for which he owed the Government $1.[11] May/June's return listed Albert as absent, owed $40 bounty money and another $2 in debt to the sutler Evans. It also noted that he was "...absent wounded since June 6, 1864".[12]

The next muster roll was filled out in DeCamp USA General Hospital at David's Island, new York Harbor".[13] His wounds were to the head and received half way through the action at Cold Harbor. According to the report made out by Army Surgeon Warren Webster on August 24, 1864, his wounds were particularly gruesome: "...Albert W. Perry, Pvt. Co. "B" (really C) 1st Vermont H. Art'y entered DeCamp GH David's Island NYH (arbor) June 15, 1864, with gunshot fracture of facial bones, received at Cold Harbor, Va June 1st 1864 & died June 22 1864 of Piles & hemorrhage from gunshot wound of head".[14]

Upon his death, the usual military paperwork was filled out and forwarded to the proper authorities. Albert's "Record Of Death And Internment" stated that he was single, a private in Co "B" (actually C) 1st Vt. H arty and that he resided in Leicester NY (really Vermont). Cause of death was "hemorrhage from a gunshot wound to the head". Deceased was twenty-four years old and an American. Date of death was June 22, 1864. There was no mention of a burial or any arrangements made for the body's disposal. No remarks were made about a family member or friend arranging for the internment of Albert. Apparently, the Government took care of matters quickly since it was June and the weather must have been warming rapidly. As a general rule, when a soldier died in the hospital, an inventory of his personal effects were made. These were usually put into the custody of a responsible party until claimed by the soldier's relatives. Despite all the money that Albert seemed to receive from the Government, his effects were very sparse: one pair of cotton drawers; one flannel shirt; one pair of stockings; one silver watch.[15] Between June 22, 1864 and September 19, 1864, the public and military records for Albert are silent. On September 19, however, Susan, Albert's mother, signed an affidavit stating that she was the widowed mother of Albert W. Perry of Co. C, 11th Reg. Vermont Vols. Heavy Artillery, deceased and that she was the sole heir and legatee who was entitled to receive his effects. She further stated that she was living in Chicago, Illinois temporarily.[16] In a follow-up letter from Folsomdale, NY, (about twenty-five miles east of Buffalo, NY) dated September 20, 1864 and addressed to Dr. Warren Webster, Surgeon in Charge of DeCamp Genl. Hospital David's Island, NY, Susan requested: "...Please send by Express all the articles and effects of my late Son Albert W. Perry, who died in your Hospital abt. 20th June last, to Dr. R.S. Mansfield, 727 North 10th St. Philadelphia, Penna at which place I shall receive them. And thus oblige, Yours Truly - Susan Perry'.[17] Not a word nor a hint of one about Albert's body or its place of rest. Albert had a headstone erected by someone in the Brookside Cemetery in Leicester, Vermont. By whom is not known. Also not known is whether there is a body buried beneath it. His death certificate is on file in Leicester. It is filled out by the Town's Clerk. And it is witnessed by two citizens, one being Sarah A. Horton, mother of another Civil War soldier buried in Brookside - Charles N. Horton. But the date on it is December 30, 1919![18] One thing is a fact without question: Albert was killed in action at Cold Harbor, Virginia, June, 1864. The Government worded it as "Mustered Out". Sarah Horton said it more eloquently: "A member of Vt. Vol. Fell at Cold Harbor, Va in defence of the Union."[19].