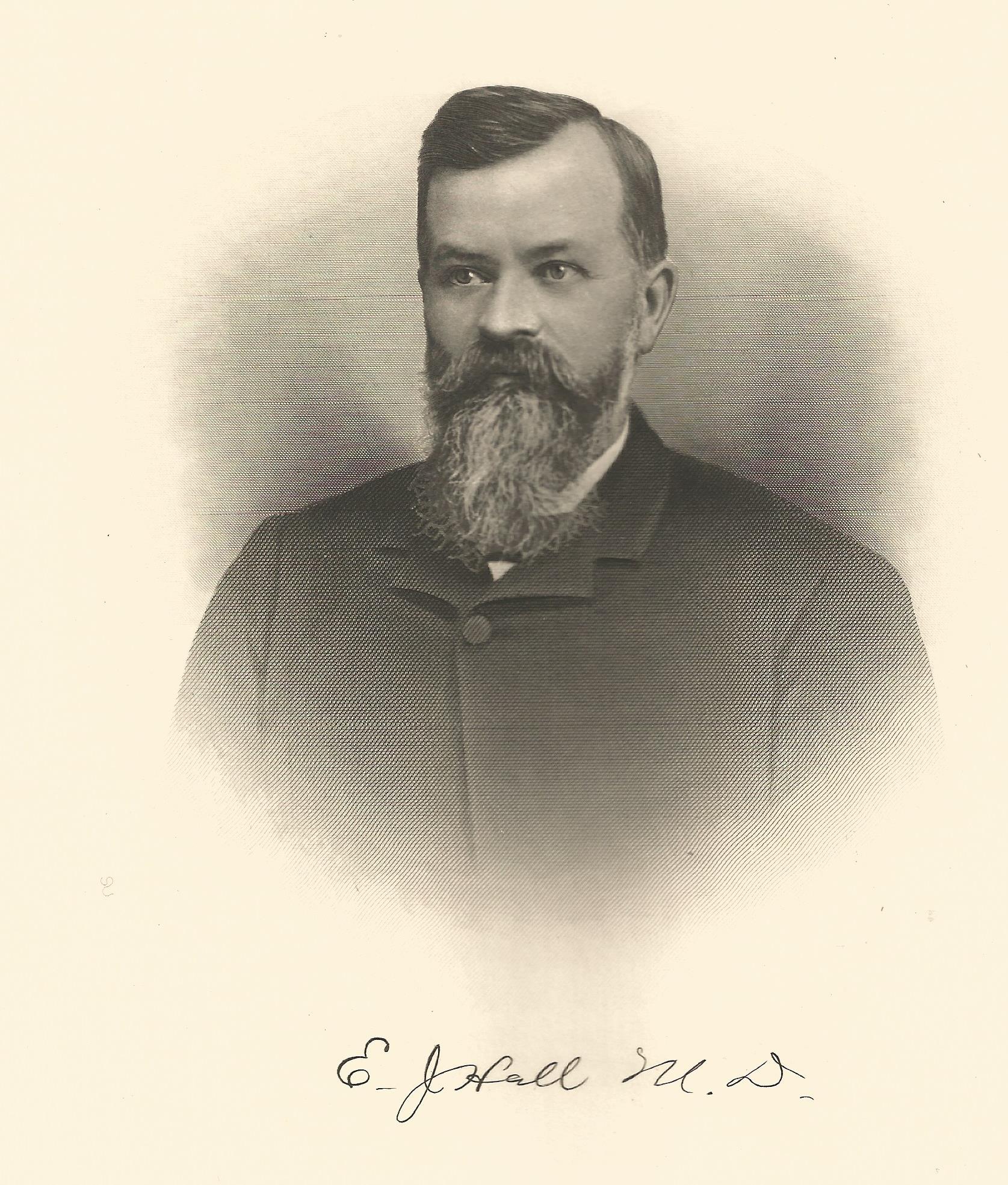 Dr. Elmore John Hall, who for a period of thirty-one years faithfully fulfilling the many duties of a practicing physician in Morrisville, Vermont, was born February 28, 1834, in Beamsville, Ontario, and was the son of the late Rev. J. P. and Sarah C. (Dayfoot) Hall. The father, who was born October 25, 1805, in Orwell, Vermont, spent the early part of his life in his native place in Bristol, after which he went to Beamsville, in the province of Ontario. Somewhat later he married, and in 1835 he and his wife united with the Baptist church, being baptized by Elder Curry in Lake Ontario. Soon afterwards he began preaching, and while visiting in Waterbury, Vermont, he was persuaded to become the pastor of the Baptist church at that place, and there he remained for eleven years, alternating between that church and the Baptist church in Morrisville. At the end of that time he returned to Ontario, where he preached fourteen years, taking up new work which developed into a strong church. At the close of this protracted service he found his health impaired, and as he was advancing in years, he came to Morristown, and settled near his children on the outskirts of the beautiful village of Morrisville. Here he spent the remainder of his days, preaching, as his health and opportunity permitted, at Johnson, Waterbury and other places, often supplying the pulpits of the different denominations of his resident village. Only four or five weeks before he died he preached in the Methodist Episcopal church, taking for his text the second verse of the one hundredth psalm. He died in Morrisville, February 10, 1889, after a short illness of pneumonia. He was universally revered and loved, being familiarly known in the neighborhood as "Elder Hall." His wife passed away March 20, 1891.

Dr. Elmore John Hall received his education in Morrisville Academy and in Castleton, and in his youth he taught school in Morrisville, Stowe and Bristol. He studied medicine with the late Dr. H. Powers, graduated from the medical department of Burlington College, and subsequently took post-graduate courses in Burlington and New York, always keeping closely in touch with the advanced thought of his profession. He began the practice in Waterbury Center, and later moved to Highgate, where he continued in practice until August, 1862, when he enlisted as a private in Company L, First Regiment Vermont Cavalry. He was promoted to the rank of assistant surgeon, January 1, 1863, and rendered efficient service until his discharge, by reason of resignation, September 16, 1864. He returned to Highgate, and in 1866 engage din practice in Morrisville in association with Dr. H. Powers.

In the local life of the community Dr. Hall was always an interested and active participant. A few years ago he and Arthur L. Cheney became interested in the drug business, having bought the Woodward store, and later Dr. Hall's enthusiasm and desire for the improvement were largely responsible for the development of plans that made possible the present corner block in which the drug business is situated. He was always intensely interested in the welfare of Morrisville Academy, of which institution he had long been a trustee. For a time he held the position of village trustee. He served as United States pension examiner for twenty-one years continuously and was one of the Pleasant View cemetery commissioners. He was a member of James M. Warner Post No. 4, G. A. R., and was a communicant of the Congregational church.

Dr. Hall married, February 15, 1859, Ophelia S. Titus. They had an adopted daughter, A. Bell, who became the wife of the Rev. Delmar E. Croft, a Baptist clergyman of Boston. They were the parents of one child, named De Foe.

Dr. Hall's last illness was short, being partly the result of overwork. In the discharge of professional duties he was indefatigable, his last call being made but one week and one day before his death, which occurred May 1, 1897. The event was followed by a universal sense of bereavement, all classes uniting to mourn the loss of a skillful and benevolent physician, and intensely loyal and public-spirited citizen, and a truly kind-hearted man. Modest to a degree approaching diffidence, he did much for the relief of the needy poor, and for the advancement of public projects, more, in fact, than will ever be known. During the funeral services all the places of business were closed, the local pastors participating in the service, and members of Post James M. Warner attending in a body. The interment was in the family lot in the old cemetery. The following extract from a letter written by Chaplain Rev. J. E. Goodrich of First Vermont Cavalry will seem to those who know him a fitting tribute to his worth:

"He was a patriot through and through, and he served the Union with the best that was in him. He could measure danger coolly and calmly, but was never deterred by fear from going wherever duty called. His skill and competency as a surgeon were well known to all of us. When he came back to civil life, not content with the professional training he had received, he took additional courses at the universities, that he might spare neither cost nor pains to equip himself thoroughly for his life work. The church, the school, and the village, all of them have missed the counsel and support of a men who had unselfishly striven to promote the general good. The new cemetery, the concrete walks, the water and the sewerage systems, the electric lights, the lot secured for a public park, the academy, of which Morrisville has so much reason to be proud, all had been promoted and actively aided by him."

To this fervent tribute to a splendid citizen, it is to be added that, up to the very last of his life, Dr. Hall was occupied with plans for the further enhancement of the advantages of his home village. As before stated, he, with others, had purchased a tract of land at the corner of Congress street, which he had determined to lay out as a public park, but his death occurred before he could fully consummate his plans, and the property was finally sold. Among his largest and most salutary benefactions was his setting aside to an elderly and destitute couple a farm which was to be their home during the remainder of their days, and was then to pass into the possession of the town.

Mrs. Elmore J. Hall, a most estimable woman, proved a real helpmeet to her large-hearted husband, and to her, he constantly attributed in fullest measure the credit for his own successful and useful life and personal happiness. She visited him while he was at Fort Scott, from January to April, 1863, sharing with him the exposures and dangers of active service in the field in the days of the Civil war. She only seconded his every effort in all his relations with the community. During his many years of suffering, which he bore with patience and fortitude, she afforded him her tenderest ministrations, and after his death she took tip with courage and ability the duties of executrix of his estate, besides carrying out with conscientious exactness various of his beneficent plans which she knew lay near to his heart.

In the death of Dr. Elmore John Hall, which occurred at his home on Park Street at almost half past seven last Saturday evening, there is removed from this community one of the most familiar figures, a successful doctor, a kind and benevolent Christian gentleman, and intensley loyal and public spirited citizen. Few men would be more missed from our streets or the town at large. Modest to a degree of approaching diffidence, he did much for the relief and aid of the needy poor, and for public projects that will never be fully known, and certainly was never done for show, by the doer. For thirty-six years he has gone about in weather, fair or foul, hours early or late, faithfully fulfilling the many duties of a practicing physician.

Starting at the very bottom, and in very pressed circumstances, he held to the duty of his calling until fortune changed, and he lived to enjoy the pleasant home and other fruits of his labor. He was born in Beamsville, Ontario, Feb. 28, 1834, the son of the late Rev, J. P. Hall. When six years old his family moved to Waterbury and when he was 12 years of age they moved to this town. His education was received at Morrisville Academy, and in Castleton, and he taught school in this town, Stowe, and Bristol. He studied medicine with the late Dr. H. Powers and graduated from the medical department at Burlington College, and subsequently took post-graduate courses in Burlington and in New York, always keeping closely in touch with the latest in his profession. Thirty- eight years ago he married his wife who survives him, then Miss Ophelia Titus, and commenced his practice in Waterbury Center. He later moved to Highgate, where he practiced, and in August 1862 he enlisted in his country"s service at St. Albans, being enrolled a member and private in Co.I, 1st Vt. Cavalry; was promoted to the rank of Assistant Surgeon, Jan. 1, 1863, and did efficient service until his discharge by reason of resignation, Sept. 16, 1864. He returned to Highgate and, in 1866 commenced his practice of medicine in Morrisville in company with Dr. Powers.

In his last sickness he was first attacked by his old enemy, a relic of his army service, malarial poisoning, coupled with facial erysipelas, and other serious disabilities, together with a worn-out condition following a very hard winters 'work. His last call was made but one week and one day before his death. In our local life Dr. Hall has always been a silent but very interested participant. He was always intensely interested in the welfare of Morrisville Academy of which institution he had long been a Trustee. He had served as U.S. pension examiner, was one of the Pleasant View Cemetery commissioners, a member of the Congregational Church, and a member of Post James M. Warner no.4.

A few years since he and Arthur L. Cheney became interested in the drug business, having bought the Woodward store, and later the doctor's enthusiasm and desire for the improvement was largely responsible for the development of plans that made possible the present corner block in which the drug business is located. He was particularly interested and active in the purchase of the Tinker property, by the syndicate, and had fond hopes for the future of his considerable amount of land recently bought beyond the Boynton place on the right.

Besides his bereaved wife, the deceased is survived by an adopted daughter, the wife of Delmer E. Croft, and a sister C.M. Boynton. Yesterday the remains of the deceased were viewed by a large number from 12 to 2 p.m., at his late home. At the latter hour, the funeral services were held, the local pastors participating in the service and members of Post Warner attending in a body. A solo was rendered by Mrs. Fisk, and selections by a quartette composed of Mrs. Fisk, Mrs. Ila Niles, Messrs Fleetwood and Gates. The bearers were Doctors Holbrook, Rublee, and Page of Morrisville, and Slayton of Hyde Park, Capt. Frank Kenfield and G.A. Cheney representing the Grand Army. The interment was in the old cemetery, where the family lot is, just across Richmond Street from the house. The business places were all closed during the services.