Connecting with an Ancestor

What is the lure of visiting an old grave site? A sense of discovery? A sense of connection? A stimulus to reflection? An attempt to communicate? An understanding or appreciation of the self?

For many years I have been captivated by old graveyards and the search for ancestry. Cataloguing burial sites is a part of family history. Knowing our family history is knowing ourselves. 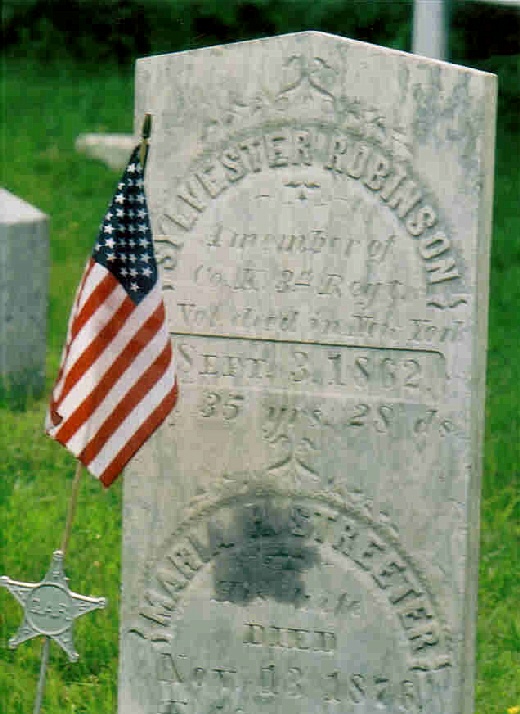 And so it was that I began to plan a visit to the grave of my great-great-grandfather, Vermont farmer Sylvester Robinson, at a national cemetery in New York City. He had died of disease early in the Civil War. I had been to the family plot in rural Brownington, Vt. (left), and his name is indeed on the headstone along with that of his wife Maria (pronounced Mariah). But here I was to learn a new vocabulary word - cenotaph, n., a marker to commemorate a death of a person who is missing or buried elsewhere.

In Sylvester's case, that would be in Cypress Hills National Cemetery in Brooklyn. A visit to the website would list him in plot 390. A phone call to the office would inform me that the location was in Section 1, but now within the private part of the cemetery of the same Cypress Hills name.

Now, we have a son who works, and for several years lived in, New York City. We had visited on a number of occasions, so I had been within a few miles of Sylvester's final resting place without being conscious of it.

More recently, however, it dawned on me - I should visit this place. I should have a vision of this setting. I should take some photographs.

This goes beyond just recording and visiting a site of family history. I feel that I have a connection to Sylvester Robinson through an oval-framed, hand-colored tin-type photograph that hangs on my den wall and a series of a dozen or so letters that he wrote home from his basic training in Burlington, Vt., through his eventual service in Virginia.

"We have got the most of our uniforms, all but a dress coat. They say they are on the road here. We got two coats and pants, two pairs of drawers, two shirts, shoes, feetings, and a cap. When we got them on, we did not know ourselves."

After his journey south through New York and New Jersey, he finally arrived in Virginia, but not before some fanfare along the way.

"We had a good time on the road. We were saluted all the way. Children and old men and women came out and waved flags and their handkerchiefs from Burlington to Troy. We were followed to the boat by a crowd, and as soon as daylight the river was lined with folks of all descriptions all the way to New York. They gave us a testament and a dinner. We went to Long Island and Staten Island. As long as we could see, the shore was alive with ladies saluting us. When we got to Philadelphia, we had a supper ready for us and a good one, too.

However, once on the front, a delayed shipment of rifles kept Sylvester on an assortment of work details though he was within a mile of the front.

"Our boys were on picket the other night. One of them and one of the rebels put up their guns and met and swapped newspapers. One of the rebs said he had whiskey enough but not enough to eat. He said he would give a canteen full of whiskey for a dozen hard crackers, and they swapped."

I had indeed once written a published piece of "historical fiction" using quotes from Sylvester's letters to amplify what I thought would have been his opinions and feelings on the Civil War. As a history teacher at the time, I had some background in that field.

"There has not been a regular fight here lately. They keep firing away some. The two armies are up close and stand growling at one another like a mess of tomcats."

Why hadn't I visited his gravesite?

So I called my son in New York. What would be the best way to get there? He subsequently forwarded me directions: the commuter train from his home in Pawling to Grand Central Station, the 4 train from East 42nd and Lexington to the Brooklyn Bridge/City Hall stop, then the J train east at Chambers Street for 15 stops to Cypress Hills. I could do this.

The wheels were starting to turn. My younger grandson had an upcoming first birthday party in August. His grandmother and I would be at the party on a Sunday after attending my 45th high school reunion in Western Massachusetts the day before. On the ensuing Monday I could take the train into New York with my son - his usual commute to work - then continue on to Cypress Hills, visit the gravesite, return to the Grand Central area for some sightseeing, them commute home with my son.

In actuality, it didn't turn out quite that way. My son was working at home that day after taking his younger son for his one-year physical check-up. And I decided not to take the train and subway but rather to drive directly to the cemetery. That made me a little apprehensive, but I decided to just barge ahead. Both the directions and the actual driving turned out to be easier than I had hoped: I-684 from nearby Brewster to the Hutchinson River Parkway, I-678 to the Jackie Robinson Parkway, which bisects a complex of cemeteries, then the exit right to the gate of Cypress Hills Cemetery at 833 Jamaica Avenue. Despite a delay for construction at the Whitestone Bridge, I was there in less than two hours.

Even the weather - overcast with occasional sprinkles - seemed appropriate for a graveside visit.

I wondered as I drove along, "What would the setting look like?" "Would I be the first ancestor to visit the site?" "What would we 'talk' about?"

After passing through the guarded entryway at the private cemetery, checking in at the office, getting permission as an ancestor to visit and directions to the old Civil War section, I wound my way up the hill to Section 1E, got out of the car at the bottom of a gentle amphitheater of white marble headstones, and started looking at the marker numbers. The first rows were too high in number. Sylvester was in the next-to-last row of the central section just before a pathway that divides the five sections in two - two above and three below. As I worked my way down that row, getting closer and closer to grave 390, the anticipation built. I would only see it for the first time once. Then, there he was, the fifth grave from the end with the grave number at the top, the name Sylvester Robinson arched beneath, and the abbreviation Vt. beneath the arched name. The stone was one in a long row among many rows of fellow soldiers, all victims of hostilities or disease.

"I think I shall get well. As it is, I am better than I have been in a good while. I want you should keep up good courage and get along as well as you can, and I will be home sometime. It won't be a great while."

This was a long chain back through my ancestry - my mother, my grandfather, a great-grandmother whom I had never known, and, here, my great-great-grandfather, whom I did feel I knew based on that photograph and those letters. This was the end of the line for Sylvester, buried far from home in northern Vermont. He had never received his rifle nor faced combat but rather died of disease. Still, he was a casualty of war, never again to see his wife and three small children.

His personal tragedy was lost in the grand scale of the war, except, of course, to his family. While the union was eventually preserved, what had once been a family had been shattered along the way. The glory of war had succumbed to the misery of disease.

"Why," I wondered as I stood over the grave, "would you have enlisted? What would have been your fervor? What did your wife think of all this? Your children?

"My own life has been one of fulfillment - a happy childhood, a cherished career in teaching, a great family with two fine sons, and now two young grandsons of my own. We could have had an enchanting conversation - in both directions - getting to know each other, but this is the best that I can now do. I will enter this visit into the family records so that those who follow will at least have a clue to your existence and whereabouts."

I took some time at that point to sit on a nearby bench and write out my thoughts in the form of this essay, as Sylvester had once sat in camp writing his letters back home.

"They say it is a very late spring. Some pieces of wheat and oats are about fit to cut. Tame cherries are ripe and sugar plums. They have had green corn for three weeks. It came from New Orleans. As for the war, you can hear what is going on as well as I can...I have got tired and can't write any more. You write as often as you can and write all the news there is."

I hated to leave, but the living awaited, so I reached over and tapped the top of the gravestone.

"Good-bye, Grandpa. You have a fitting resting place, though it be far from home. Who knows, I may bring some of your other ancestors to visit someday."

And off I went, returning, as he was unable to do, to my family and the future. I was grateful for that. And I was comforted by visiting and now having a vision of this place and space after having gained some insights from a tintype and some letters. A circle had been completed. I now had a clearer image of my roots.

And what is that image? To take a stand and back it up. To persist through difficulties. To remember where you came from. To be observant of life along the way. To stay in touch with those who are important to you. To hope for the best.

As for me, I felt that I had fulfilled a sense of duty, a sign of honor, an act of caring for Sylvester Robinson. I had gone out of my way to find him, to bring him back home, so to speak. That was important to me, to have made that journey. 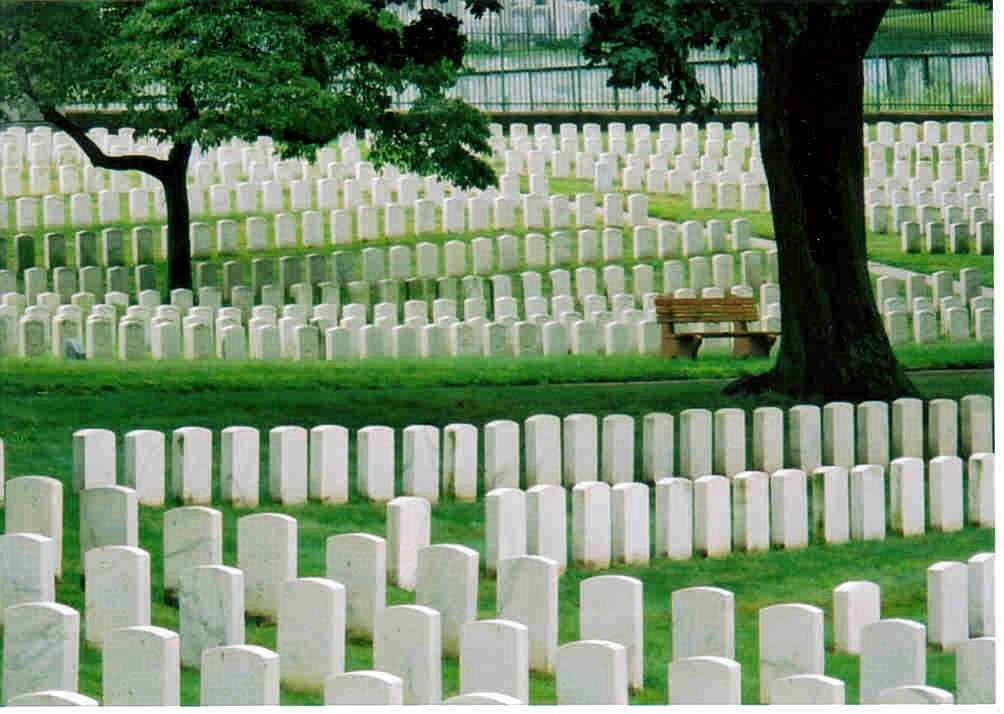 State of Vermont
To
Sylvester Robinson

You having borne an honorable part as a Volunteer from the State of Vermont in suppressing the rebellion and thereby preserving the integrity of the Union, the supremacy of law, and the liberties of all men under law, now therefore I, John W. Stewart, Governor and Commander in Chief by authority of the Legislature, present you this testimonial of your courage, patriotism, and fidelity in your Country's cause. Given at Montpelier this Fourth day of July in the year of our Lord one thousand eight hundred and seventy-one, and of the Independence of the United States the ninety-sixth.