Gardner P. Rowell was born in September, 1841 in Haverhill, Mass, son of Vermont native Leonard F. Rowell and Sarah Louise Kimball. Gardner moved to Berlin, Vermont with his family in 1844 and when of age became a farm laborer. In 1862, he enlisted in Company C, 13th Infantry Regiment Vermont and was mustered out in 1863. On February 5, 1871, Gardner married Ella Andrews, daughter of Aaron Strong Andrews and Betsey Andrews, also of Berlin, Vermont. Gardner and Ella Rowell made their home in Berlin, Vermont where he continued in the farming trade. They became the parents of two daughters, Nellie and Bertha. In 1891, Nellie Rowell married Philip C. Smith, son of fellow Civil War Soldier Thomas A. Smith, 4th Infantry Regiment Vermont and Harriet Jones of Rochester, Vermont. Bertha Rowell married Charles S. Holmes. After spending the majority of his life as a farmer, Gardner P. Rowell retired to Montpelier where he died on September 19, 1905. 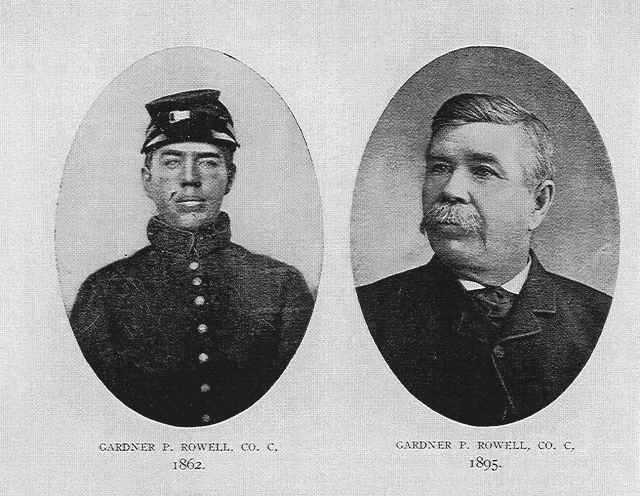 "GARDNER P. ROWELL was a volunteer from the town of Berlin and joined Captain Lewis L. Coburn's company organization at East Montpelier August 29, 1862. His age at enlistment was 20. Brought up to the occupation of the tilling of the soil. His education was in the common schools of his native county and limited. But like nearly all farmers boys had the advantage of a careful moral training by precept and example at home, a valuable asset for a young man as a soldier in any walk of life. Young Rowell had ever been taught the difference between right and wrong and was old enough to know and appreciate his duty in the pending conflict between secession and loyalty to the Union. And because of these important pre-requisites was not only a valuable but essential addition to Company C, brave boys from among the hills and valley's of Berlin, Calais, Worcester, Marshfield, East Montpelier and Plainfield. He was a model young man and acquitted himself with credit as a soldier, on hand on all occasions when called, seldom absent from the roll call or in any way endeavoring to escape duty. With prompt, upright, honest, and general to a fault, his last hard tack willingly divided with any comrade. His full term of enlistment was served and (he) was mustered out July 21, 1863, with the record of well done. In civil life he maintained the respectable character earned in the army. He died at Montpelier September 19, 1905, and is buried in Green Mount Cemetery."