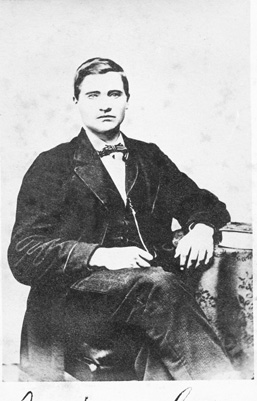 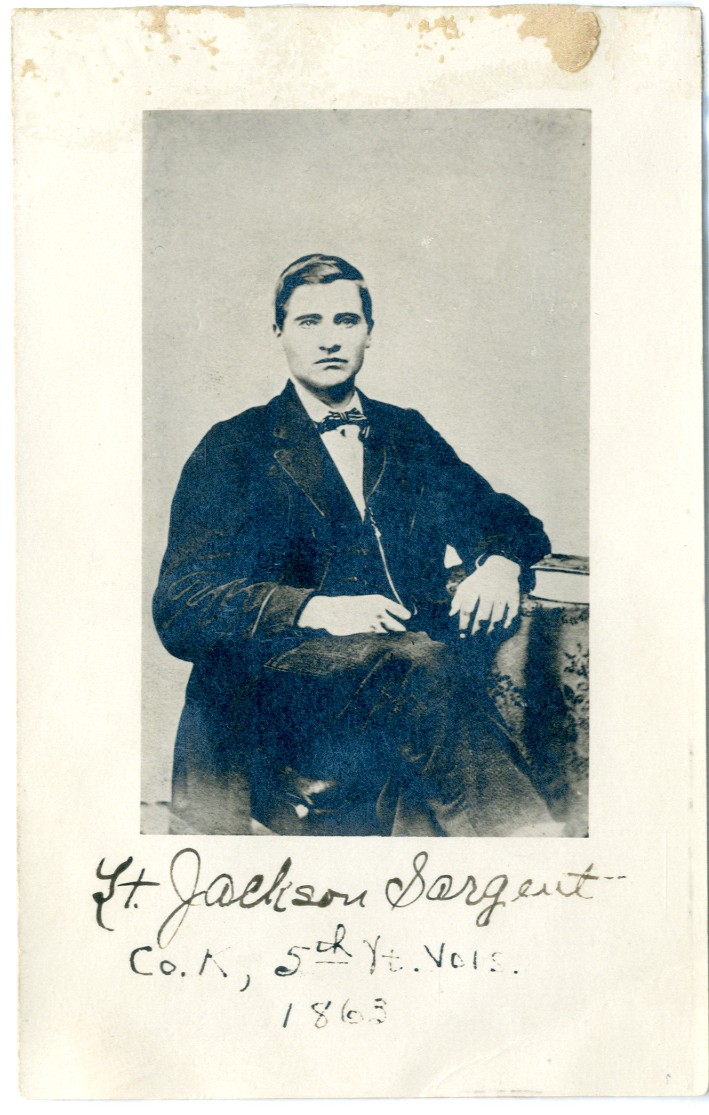 Jackson Sargent, of Stowe, recently received a medal from the United States government which he prizes very highly. The medal is suspended by a loop of blue ribbon decorated with white stars and consists of a bar of bronze, surmounted by an eagle with the word "valor" on the bar. From the bar depends a large five pointed star decorated with an enameled wreath of green laurel, a helmeted head on the back, and the inscription, "Sergeant Jackson Sargent, Co. D, 5th Vermont Infantry, Vol., April 2, 1865, Petersburg." There is also a blue button and a blue ribbon to wear around the neck with the medal.

This medal was given to Mr. Sargent in exchange for the one given him many years ago for a brave deed, he being the first to plant the colors on the enemy's works at Peterburg when they yielded to the boys in blue April 2, 1865. The Memorial Record, prepared by R. A. Savage, says of Mr. Sargent, "He was always ready to duty and took part in all the battles of his regiment. He was also ready for emergencies, for when during another engagement the staff of the flag he was bearing was hit by a ball and split, he produced a string from his pocket and tied the broken staff together and went on ahead with the colors as before."

Jackson Sargent, a veteran of the Civil War, died at his home on Maple Street about 6 o'clock Sunday evening, Oct 2, after two weeks illness from the effects of a shock.

Mr. Sargent was born in Stowe in December, 1841, and passed most of his life here.

As color Sargent in Company K, 5th Vermont Regiment, he was the first man to plant his flag on the parapet of the fort at Petersburg when the federal troops broke through the Confederate lines in the final charge of the war.

He was promoted to first lieutenant for the bravery displayed in this battle and later received a medal from congress, and has also received an augmented pension. He received a slight wound while planting his colors on the break-works.

He was mustered out at the close of the war after three years and ten months service. He was one of the few surving members of the H.H. Smith Post, G.A.R., at the time of his death. held the office of junior vice-commander, and quartermaster sergeant.

The funeral for Jackson Sargent was held at his late home Thursday afternoon, The Rev. C. E. Hayward officiating. The bearers were his two sons, Dr, H. E. Sargent, W. M. Sargent, a grandson E. W. Sargent, and a nephew L. C. Sargent. There was a profusion of beautiful flowers.

The burial was made in the Riverbank Cemetery. Twenty members of the Donald McMahon Post, American Legion, acted as an escort to the cenetery and carried out the impressive ritual burial service, Gale H. Shaw acting as chaplain. A firing squad from the Legion fired a salute over the grave, and G. J. Montgomery as buglar sounded taps.

There was a large attendance, including Commander S.C. Spaulding of the H.H. Smith Post G.A.R., and a large number of the Relief Corps members, Commander G. L. Bates, Donald Moffat, Charles Mould and James Eaton of Morrisville, and L.P. Butts of Hyde Park, members with Lieutenant Sargent of Co. D., Fifth Vermont Regiment.