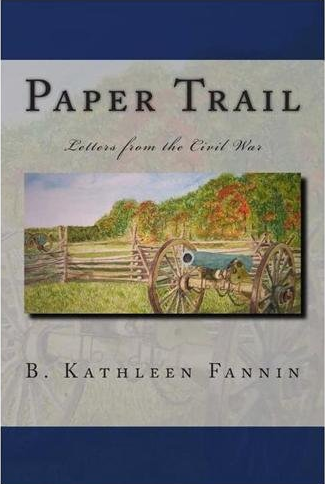 During the summer of 1862, nearly five thousand Vermonters enlisted and joined together to form the Second Vermont Brigade, five regiments of nine-month enlistees who spent the majority of their military careers in the backwaters of the war, only to find themselves engaged in the 'high-water mark' of the war at Gettysburg in the last weeks of their military careers. Within their ranks was 20 year-old Private Oscar A. Stearns, Co. B, 13th Vermont Infantry.

A farm boy from Warren, Vermont, Stearns could not have anticipated military life, with its drudgery, disease, boredom and that tiny percentage of war that is pure hell, namely the battle of Gettysburg.

Paper Trail follows the lives of Oscar and his sweetheart and eventual wife Jeannette Persons through their correspondence with each other and family and friends during the Civil War and nearly a decade after when they joined the veritable flood of Vermonters migrating west to find better lives. They cover three major topics: the Civil War itself, a love story and post-war migration from Vermont.

The collection includes 183 letters to and from Oscar, Jennette, her brothers Fred and Orson, his brother Clifton, Oscar's mother, Jennette's aunt, and a letter from Oscar's best friend, James Willson, to Jennette; Willson was killed at the battle of Gettysburg.

After a probable short reunion when Oscar was discharged, they were separated again, he working in Newport, and she in Granville, about 100 miles distant, so their correspondence continued. Marriage follows, then their move out west.

A number of illustrations augment the text, including a couple photographs, samples of letter-heads, business cards, and several letters, including one interesting one where Oscar had apparently run short of paper, and "proceeded to write his final paragraph as well as what he wrote on the 24th (May 1863), by turning the paper at right angles and writing between the lines of the letter!"

This was obviously a labor of love for the multi-talented Rev. Dr. B. Kathleen Fannin, author, artist, park ranger, archaeologist, Civil War reenactor and retired college chaplain, who is a graduate of the University of Texas at Austin, Eden Theological Seminary (St. Louis, MO) and Wesley Theological Seminary (Washington, D.C.). She has published six other books, but this is her first foray into the Civil War, except for some poems she published in 2010. The cover illustration, a watercolor painting of a cannon at Gettysburg, is also her work.

These letters are part of a number of documents that were passed down through five generations of women in the family until they got to Fannin. She does an excellent job documenting people and places mentioned in the letters, and interlacing events chronicled by period authors. Her footnotes are numerous and well documented. Overall, this is a great and welcome addition to the historiography of Vermont's participation in the Civil War.

Tom Ledoux is the creator and webmaster of the Vermont in the Civil War web project, VermontCivilWar.org. He has an M.A. in military studies (Civil War studies) from American Military University.

Paper Trail: Letters from the Civil War is available online from Amazon.com and other online vendors.