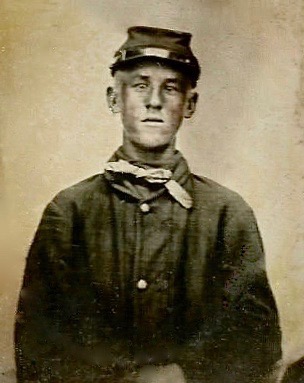 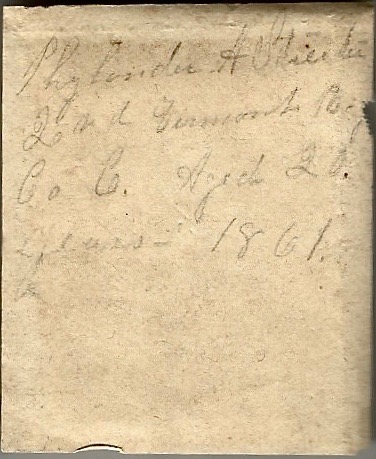 I was detailed to go to the Rebel works at Cold Harbor in the night and see what was in front of them, which I did and it took me about three hours to come back. As the moon came out almost as bright as day, and nothing to shield me but the swamp grass, I had to crawl flat on my face all the way but I got back to Headquarters about 3.A.M. and made my report to General Wright then commanding the 6th Corps. This I deem the most important event of my service. For this service General Wright sent to me (through Regimental Headquarters) a recommend[ation] for a commission, which did not reach me until 1890. The [recommendation] reached my Captain just before my time of service was out, and he kept them and never told me a word about it until about four months before he died.

Philander was mustered out of the service to his country on 29 June 1864 in Brattleboro having served his entire 3 years with only a short furlough to recover his health after being paroled from Libby prison January 1862. He returned home to Vernon, Vt. just in time to watch his father, Benjamin Arnold Streeter pass on 10 July 1864. He married his war-time sweetheart on 5 December 1866 in Titusville, NY. They eventually settled in Holyoke, Ma. where they raised their 3 sons. Philander was employed at the Parson's paper mills and Beebe and Holbrooke which he helped to build. He was active in the G.A.R. in Holyoke, Kilpatrick Post #71 for years, and participated in the 1876 dedication of the Holyoke Civil War Soldiers Monument in which there was a horrible accident. He spent a term as the post's commander in 1890. He was present at several reunions of Co. C in Brattleboro, VT over the years. At one reunion, in 1890, Philander stood for a photograph of the survivors of his company.
Pvt. Philander A. Streeter passed on 16 January 1919 at the age of 78. His wife of 53 years, Nettie Mae outlived him by 19 years passing on 4 Feb 1938 at the youthful age of 93.

Was for Thirty Years Master Mechanic for American Writing Company

__________________________
Philander A. Streeter, 78, the well known master mechanic, for many years connected with the American Writing Paper company, died this morning at the Holyoke City Hospital.
He was of the eighth generation of the family founded in America by Stephen and Ursula Streeter of Gloucester, the line of descent being through their son Stephen.
Mr. Streeter was born in Vernon, Vt. Sept. 15, 1840, son of Benjamin Arnold Streeter, and a maternal grandson of Uriah B. Green, a colonel in the war of 1812. He was educated in the schools in Vernon and for a time was employed on the farm, later going to Brattleboro to learn the carriage builders trade, but when the war broke out he responded to President Lincoln's call, although much against his employer's wishes.
He enlisted in June, 1861, Co. C Second Regiment, Vermont Volunteers Infantry. His regiment followed the Sixth Massachusetts in their tumultuous passage through Baltimore, and was the second regiment to arrive in Washington from the north, He saw hard service with the Sixth Corps, Army of the Potomac.
Mr. Streeter nearly came to grief in his first battle, through an act of mercy to a wounded comrade, which reflected great credit to him. At the First battle of Bull Run in a pause of his retirement to aid a wounded comrade, he was taken prisoner by a party of Southern Cavalry whom he and four of his companions thought were Union troopers; but who proved to be Confederates.
With many others captured in the same battle, they were sent by rail to Richmond, when disembarked from the freight cars and formed into line, Mr. Streeter was placed in the van and at the head of the line entered Libby prison, the first Union prisoner of war to enter that converted tobacco warehouse, which proved to be a place of much suffering and woe.
He was exchanged at the end of five months, but the change that had taken place in this time was most terrible, and the man of 165 pounds, on entering, was the skeleton of less than 100 pounds on leaving. He was sent north and once again recovered his health to such a degree that he again went to the front and fought until the end [ed. note: until June 29, 1864 - the war went on until April 1865].
Among his battles were Second Bull Run, the Wilderness and the battles around Richmond. In addition to being slightly wounded in the furious fighting at the Bloody Angle at Spotsylvania, he had several narrow escapes. Having a number of bullets pass through his clothing, but he returned bronzed and scarred, and had the pleasure of entering Richmond, a second time, a victor and not a prisoner.
After the war, Mr. Streeter for a time conducted a carriage repair shop in Vernon [Vt], but later went to Poughkeepsie, NY, where until 1871 he was engaged as a carpenter, In that year he located in Holyoke [Mass.], where he was employed by Beebe & Holbrook, assisting in building their mill and continued in their employ for twelve years. He sustained an injury that for a time caused him to retire from mill work, and he engaged in light farming until he entered the Mt. Tom paper mill as master mechanic. When that mill was absorbed and became the Parsons division of the American Writing Paper Company. Mr. Streeter continued as master mechanic and served continuously for 30 years, retiring in 1913 from active performance of his duties.
He was a charter member and past commander of Kilpatrick Post [71] G.A.R., a member of the Methodist Episcopal church and in political faith was a republican.
Mr. Streeter married, Dec. 5, 1866, Nettie M. Tracey [Tracy], daughter of Frederick M. and Susan (Wood) Tracey of Delhi, NY, who descends from ancient Colonial family, her paternal line Tracey, her maternal line Wood. Through her mother she traces to a great-great grandfather, Benjamin Rush, a signer of the Declaration of Independence. Her father, Frederick M. Tracey was of Delaware County, New York, and both his ancestors and descendants being prominent in New York city and state.
While he was in service, his patriotic wife to be was doing her bit at home, and in after years Mrs. Streeter the moving spirit of the Woman's Relief Corps, received every honor the organization could confer.
On Dec. 5, 1916, Mr. and Mrs. Streeter celebrated their golden wedding anniversary. The affair was a very patriotic one.
Mr. Streeter leaves besides his wife, two sons, Herbert Ellsworth of Springfield, general manager of the Swedish Gage company, Inc., Austin Taylor of West Springfield, engineer of the Boston & Albany. The youngest son, Oscar Alonzo, a veteran of the Spanish-American War died in 1905 [ed. note: killed while employed by the B&A railroad].
The funeral will be held Saturday afternoon [ed. note: Interment - Forestdale Cemetery, Holyoke].